By
Garrett Miley, The Sports Xchange 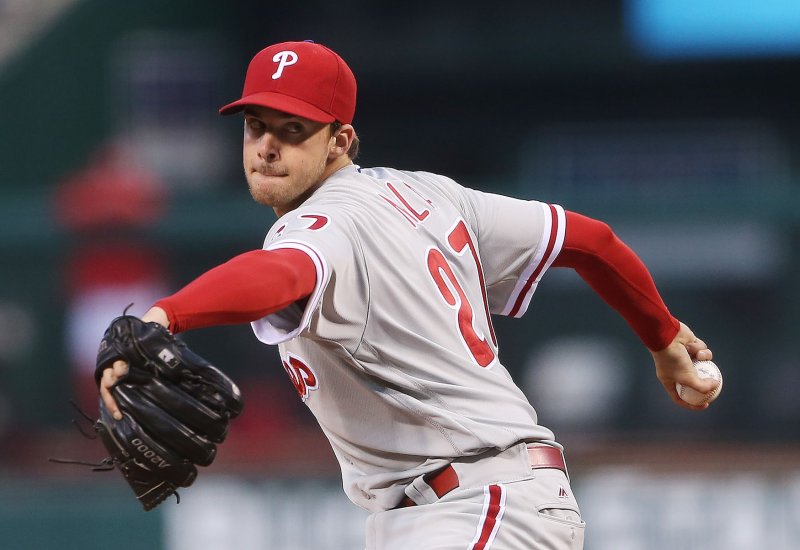 Aaron Nola and the Philadelphia Phillies shut down the New York Mets on Saturday. Photo by Bill Greenblatt/UPI | License Photo

PHILADELPHIA --The Philadelphia Phillies clawed their way to a 3-1 victory over the New York Mets on Saturday night behind the arm of starting pitcher Aaron Nola.

Nola (9-7, 3.02 ERA) stifled the Mets for seven innings, allowing one earned run and two hits while striking out eight batters in the Phillies' come-from-behind victory.

Nola is one of the hottest pitchers in baseball, posting a 1.71 ERA in his last 10 starts.

Mets outfielder Yoenis Cespedes crushed the only bad pitch from Nola, a 2-1 curveball, deep over the left field fence to give New York a 1-0 lead in the top of the fourth inning.

Cespedes continues to swing a hot bat in Philadelphia. His 10 home runs in 18 games at Citizens Bank Park are the most he has in any visiting ballpark.

But the Phillies answered in the bottom of the fifth inning when Cesar Hernandez singled home Nick Williams to tie the score 1-1. Freddy Galvis followed with an RBI single, scoring Maikel Franco, to give the Phillies a 2-1 lead.

Tommy Joseph hit a sacrifice fly to score Galvis in the bottom of the eighth to provide the Phillies' bullpen some insurance with a 3-1 lead.

Luis Garcia picked up his second save of the season for the Phillies, pitching two-thirds of an inning in the ninth.

The Mets threatened to get on the board first in the top of the third inning. Amed Rosario doubled to the gap in right-center field for the first hit of the ballgame. Rosario later advanced to third on a passed ball by Phillies catcher Cameron Rupp, but the rookie was caught while attempting to steal home on a double steal to end the inning.

Williams went 1-for-1 with an infield single, two walks and a run scored for the Phillies. He was also hit by a pitch, reaching base all four times he stepped into the batter's box.

Steven Matz (2-6, 5.54 ERA) tossed 5 2/3 innings for New York, striking out one and surrendering two runs, both earned, in the bottom of the fifth inning.

Mets second baseman Neil Walker was traded before the start of the game to the Milwaukee Brewers. Infielder Jose Reyes started in his place at second base and batted second, going 0-for-4.

NOTES: As a Met, 3B Asdrubal Cabrera is hitting .366 (41-for-112) with eight home runs against the Phillies. ... Mets RHP Matt Harvey made a rehab start for Class A Brooklyn. ... Phillies rookie LF Rhys Hoskins struggled in his second start since being called up to the big leagues, going 0-for-4 and he remains hitless since being called up. ... Phillies OF Odubel Herrera has hit safely in 15 consecutive games after a single in the bottom of the eighth inning. ... In the rubber match of the series on Sunday, RHP Zach Eflin (1-3, 5.67 ERA) will pitch for the Phillies against Mets RHP Chris Flexen (1-1, 8.49).