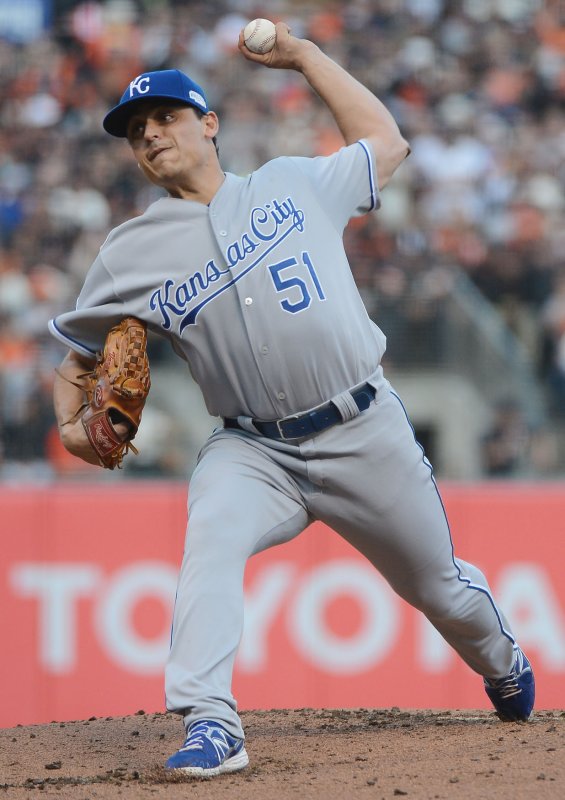 BOSTON -- Jason Vargas pitched out of a July slump and Salvador Perez and Mike Moustakas homered, carrying the Kansas City Royals to their ninth straight win, a 4-2 victory over the struggling Boston Red Sox on Friday night.

The loss dropped the Red Sox, losers of five of their last six, out of first place in the American League East for the first time since June 29, falling a half-game behind the New York Yankees. Boston is 6-9 since the All-Star break.

Vargas, an All-Star who followed a 6-1 June with a 9.45 ERA in three July starts, allowed a run on five hits through six innings to raise his record to 12-4. Four relievers finished up, with Kelvin Herrera working the ninth for his 22nd save.

Perez hit a solo homer off Rick Porcello (4-14) in the second inning and Moustakas then banged his 30th of the year with two men on in the fourth. The Royals, who came into the game two games behind the equally hot Cleveland Indians in the AL Central, have outscored their opposition 67-29 and outhomered their foes 20-2 during the winning streak.

Brett Gardner, Aaron Judge and Clint Frazier homered off Austin Pruitt but it was all about Tanaka as the Yankees won for the eighth time in 10 games and improved to 10-5 since the All-Star break. Didi Gregorius added an RBI single for New York's final run.

Tanaka (8-9) allowed a run and two hits and did not walk a batter. He lost his perfect game bid when Adeiny Hechavarria hit his 69th pitch just past the diving attempt of shortstop Gregorius and into center field. Tanaka then rebounded and struck out Mallex Smith for a third time to reach 10 strikeouts.

DETROIT -- Josh Reddick cracked a three-run homer in the eighth inning and also had two sacrifice flies for a five-RBI night that rallied Houston to a victory over Detroit.

Bruce Rondon (1-2) gave up two singles and Reddick's 10th home run of the season, on a hanging slider, as he blew a 5-3 lead turned over to him by Jordan Zimmermann. Zimmermann gave up six hits and three runs in seven innings. It was Detroit's fourth loss in a row and plopped the Tigers a season-low 11 games below .500.

Brad Peacock (9-1), displaced from the rotation by Dallas Keuchel, picked up the win after four innings of three-hit, two-run relief. Chris Devenski pitched the eighth and Ken Giles claimed his 22nd save with a scoreless ninth.

The victory by the Angels in the opener of a three-game series stopped their three-game losing streak and ended a four-game winning streak by the Blue Jays. In making his eighth major league start and ninth appearance, Bridwell (5-1) allowed one run, one walk and struck out four en route to his third straight win.

Kaleb Cowart had three hits and an RBI for the Angels. Justin Smoak homered for the Blue Jays. Toronto starter J.A. Happ (3-8) remained winless since July 4 when he allowed five hits, four walks and three runs while striking out five in six innings.

The offensive outpouring helped get Jake Thompson (1-0) a win in his first major league start of the season. Less than 30 minutes before the first pitch, the Phillies announced scheduled starter Jeremy Hellickson was scratched but did not disclose a trade or injury.

The Phillies already led 1-0 before Aaron Altherr, the first batter in the Phillies' fifth, launched a home run into the second deck of the left field seats. He hit another solo homer in the eighth inning, his 16th of the season.

MIAMI -- J.T. Realmuto snapped a tie score with a seventh-inning solo homer down the left-field line as Miami rallied to defeat Cincinnati.

Realmuto came back from a bases-loaded strikeout in the first inning and ended up with a huge game, finishing a triple shy of a cycle. He went 3-for-4, including his career-high 12th homer of the season. The Marlins have won six of their past eight games.

Cincinnati has lost five games in a row and 13 of its past 15. The Reds have lost seven straight games at Marlins Park. Dusty McGowan (6-1) earned the win with one scoreless inning of relief. Wandy Peralta (3-2), who gave up Realmuto's homer, took the loss.