By Greg Swatek, The Sports Xchange 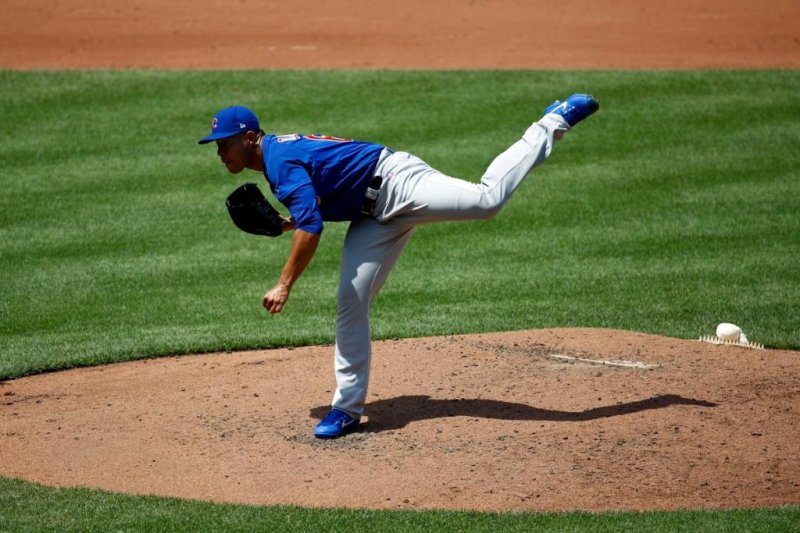 Jose Quintana made a sensational debut for the Chicago Cubs on Sunday, striking out 12 over seven scoreless innings in an 8-0 victory over the Baltimore Orioles. Photo courtesy of Chicago Cubs/Twitter

BALTIMORE -- Three days after the Chicago Cubs paid a steep price to their crosstown rival for another front-line starting pitcher, Jose Quintana showed why it may have been worth it.

Quintana made a sensational debut for the Cubs on Sunday, striking out 12 over seven scoreless innings in an 8-0 victory over the Baltimore Orioles.

"I felt a little nervous in the first inning," said Quintana, who was acquired Thursday in a blockbuster trade that sent four minor-league prospects to the Chicago White Sox. "But, after a couple of throws, I threw everything out and could focus on my game."

With Quintana and the big bats leading the way, the Cubs opened the second half of the season with a three-game sweep of the Baltimore Orioles. They scored 27 runs and hit 10 home runs in the series.

The Cubs climbed back over .500 at 46-45 and pulled within 4 1/2 games of the first-place Milwaukee Brewers, who lost at home to the Philadelphia Phillies 5-2.

"The most impressive part has been the energy," Cubs manager Joe Maddon said. "I really believe if we play with that kind of internal fire and energy, we are going to win a lot of games in the second half. That's the difference for me. It's just how we feel about ourselves."

Quintana, the first left-hander and just the third pitcher overall to make starts for the Cubs and White Sox in the same season, provided a huge boost right from his first pitch Sunday.

He struck out Adams Jones to start his day and worked three perfect innings with five strikeouts before allowing a hit.

Jones got him for a ground-rule double to start the fourth inning for the Orioles' first hit, but he was stranded on third after Quintana got Manny Machado to ground out meekly to first base and then struck out Jonathan Schoop and Mark Trumbo.

After struggling in six previous starts against the Orioles, including one on May 7 with the White Sox, Quintana only surrendered three hits.

"Listen, he was obviously really good," Maddon said. "I really liked his routine on the mound. Did you notice the big breath? Then, the delivery begins after that. Tremendous focus per pitch. That's what I took away from it."

The Cubs earned their first interleague sweep on the road since August of 2016 and just their second road sweep over an American League East opponent with a big assist from their newly acquired pitcher.

Catcher Willson Contreras, batting cleanup, recorded the first four-hit game of his career, while Anthony Rizzo and Kris Bryant each homered for the defending World Series champions, who jumped all over maligned Orioles starter Ubaldo Jimenez.

The Cubs opened the second inning with three straight doubles to grab the early lead.

A two-out single to center by leadoff man Ben Zobrist in the second made it 4-0 and marked the 10th two-out run the Cubs scored over the last two games.

Bryant extended the lead to 6-0 in the fourth by ripping a 1-0 pitch from Jimenez into the left-field stands for his 19th home run of the season. Later, with no outs in the ninth inning, Rizzo belted his 22nd homer into the center-field seats off of reliever Darren O'Day.

"It's a good team," Orioles manager Buck Showalter said. "They are not going to let you get away with those mistakes."

Quintana matched the Cubs' record for the most strikeouts in a debut. It marked the third time this season that the left-hander has struck out 10 or more batters and the 10th time of his career. His career high for strikeouts in a game is 13.

He came into the game with a 1-4 record against the Orioles and a 4.29 ERA. In his last start against them on May 7, he allowed four runs on nine hits over five innings in a losing effort. But he showed Sunday why he could be such a valuable addition for the Cubs during the second half of the season.

"That's why you have to give up four players for a guy like him," Showalter said. "We knew he'd be having a lot of adrenaline flowing for him today, new teammates, trying to make a mark and prove himself a little bit."

Jimenez, on the other hand, was not nearly as good. He lasted just 3 2/3 innings, allowing six earned runs on 11 hits. He hasn't made it out of the fourth inning in six of his 14 starts this season. He hasn't gotten past the fifth inning in 10 of those starts.

"I was able to get ahead but couldn't put it away," Jimenez said. "They were having too good of an approach, taking the ball to the opposite field. And by the time we figured it out, it was too late. They already scored three, four runs."

NOTES: After losing six consecutive road series, the Cubs are now unbeaten in four of their last five. ... Cubs C Willson Contreras has now hit safely in 10 of his last 11 games. ... Orioles RHP Ubaldo Jimenez suffered his first home loss of the season in seven starts. He fell to 8-4 in 15 interleague starts and 15-11 in 33 starts overall against the opposing league. ... The Orioles were swept at home for just the second time this season. They lost three in a row at home to the Minnesota Twins on May 22-24.