WASHINGTON -- Tommy La Stella had a pinch-hit RBI single and Jon Jay had a two-run double with two outs in the ninth as the Chicago Cubs rallied for three runs in the frame to beat the Washington Nationals 5-4 on Thursday, earning a split of the four-game series.

Wade Davis pitched the last of the ninth for his 16th save as he retired all three batters.

Blake Treinen (0-2), who gave up the three runs in the ninth, took the loss while Felix Pena (1-0), who pitched one scoreless inning, got the win.

Anthony Rendon hit a two-run, go-ahead homer in the seventh off Carl Edwards, Jr. to give the Nationals a 3-2 lead in the seventh. Rendon hit a full-count pitch to left for his 16th homer of the year and 11th in his last 32 games.

Pinch-hitter Brian Goodwin of Washington had a bases-loaded single to drive in a run against reliever Pedro Strop to make it 4-2 later in the seventh.

Jeimer Candelario hit his first major league homer -- a solo shot to start the seventh -- to give the Cubs a 2-1 lead off starter Joe Ross. The homer came in his 42nd at-bat over the past two seasons.

The Cubs took a 1-0 lead in the top of the first as Anthony Rizzo doubled with two outs and then scored on a single to left by Willson Contreras, who was thrown out trying for a double.

Washington tied the game in the bottom of the first. Bryce Harper walked with two outs and then scored on a double down the right field line by Ryan Zimmerman.

The double by Zimmerman tied the Montreal/Washington franchise record for doubles in a career at 360, also held by Tim Wallach. Zimmerman broke into the majors with Washington in 2005 and entered Thursday leading the league in slugging at .632.

Washington manager Dusty Baker argued a third strike on his left fielder, Ryan Raburn, in the sixth with home plate umpire Chad Fairchild and then was ejected by first base umpire David Rackley.

To make matters worse, Washington shortstop Trea Turner left the game in the top of the ninth after he was hit on the right arm by a pitch in the seventh.

NOTES: Cubs SS Addison Russell (shoulder) was back in the starting lineup for the first time since Sunday, when he left the game in Miami with a sore shoulder. He pinch-hit in the Monday and Tuesday games in Washington. ... 3B-OF Kris Bryant (ankle sprain) did not play after he left Wednesday's game in the fifth inning after stepping on the third-base bag after catching a foul pop. He could return Tuesday, according to manager Joe Maddon. ... Cubs OF Mike Zagunis, who made his MLB debut June 22, was drafted out of Virginia Tech in 2014 by Chicago. He walked as a pinch-hitter in the seventh. 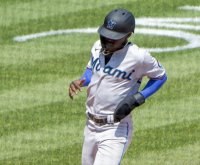