By
Alan Saunders, The Sports Xchange

PITTSBURGH -- The Pittsburgh Pirates came into their game with the Colorado Rockies on Tuesday night with 58 home runs -- second fewest in baseball.

But they broke out the bats in a big way, getting homers No. 59 and No. 61 from Andrew McCutchen and No. 60 from John Jaso to earn a 5-2 win over the Rockies at PNC Park

McCutchen hit a solo home run to left field to start the scoring in the fourth inning and then came through with another shot to the bleachers with Josh Bell on base in the eighth.

The pair of round-trippers gave McCutchen 11 for the season and continued a hot stretch that started after he got two days off, made a mechanical adjustment and was moved to No. 6 in the batting order.

Jaso came through with a two-run pinch-hit homer that also scored Jordy Mercer in the seventh inning. It was Jaso's fourth home run and second pinch-hit home run of the season. He is hitting .400 (6-for-15) as a pinch hitter this year. The reason for so much success at pinch hitting?

"I don't know," Jaso answered. "I just get ready during the game, stretch out and relax. I don't want to get too amped up or anything like that. I've done it a lot in my career. I know that nerves can get in there and adrenaline, so just keep that calm and it becomes another at-bat like you started the game."

Jaso was pinch hitting for Gerrit Cole, who earned the win (4-6). Cole snapped a four-start streak of subpar performances by throwing seven three-hit innings and allowing just one run.

In the fifth, Colorado's Trevor Story walked and scored from first on a single to shallow left field by Tony Wolters. Story was running on the pitch and never stopped, getting to home plate right as the relay throw came from shortshop Jordy Mercer to catcher Elias Diaz. But Story snuck his hand around Diaz and touched home plate to tie the game.

"(I) got a good jump," Story said. "It helped that I was in motion. Kind of picked up the ball and saw that it was in no-man's land. We talk about that all the time. We run until (third-base coach) Stu (Cole) stops us. I could get the sense that it might have been one of those plays."

Story also drove in Mark Reynolds with an RBI single in the ninth off Pirates reliever Felipe Rivero.

NOTES: Pirates C Chris Stewart has been performing baserunning drills in Pittsburgh as he returns from a strained left hamstring. Stewart has been on the disabled list since May 30. ... Rockies LF Gerardo Parra will be out longer than expected with his right quad strain. Parra last played on June 6 and was originally expecting only a two-week absence... Colorado LHP Tyler Anderson threw a three-inning, 52-pitch simulated game without any pain in his inflamed left knee. The club is still deciding whether he needs to have a rehab start. He hadn't pitched since his last start May 30. ... RHP Jon Gray, who was Colorado's Opening Day starter, will make a rehab start with High-A Lancaster (California) on Wednesday. Gray has been out since April 14 with a stress fracture in his right foot. 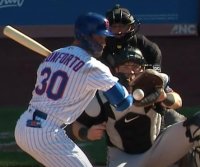 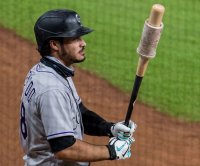