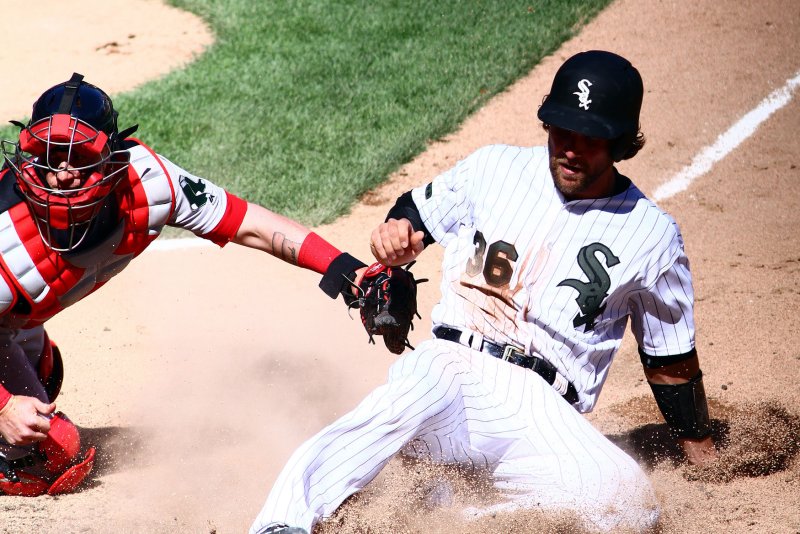 CHICAGO -- Chicago White Sox catcher Kevan Smith played more than 500 games in the minor leagues before earning a part-time role in the majors this season.

So nobody could fault Smith for grinning as he rounded first base Monday night on his first career home run. His 409-foot shot to right-center field set the tone as Chicago held on for a 10-7 win over the Baltimore Orioles.

"Gave one big clap when I hit first, and then I smiled and I was like, 'All right, first one's out of the way, now we go,'" Smith said. "I've been feeling good, I've been taking a lot of good swings, it just wasn't coming through.

"I was kind of joking, I got a new shipment of bats in today, a different model. It was the first swing of the game I took with it and I was like, 'All right, let's order about three dozen of those.' It comes when you least expect it."

The White Sox scored more than five runs for the first time since May 30 and matched a season high on defense by turning four double plays.

Trey Mancini went 2-for-4 with a home run and three RBIs to lead the Orioles. On a night when Manny Machado returned to the starting lineup, Chris Davis went down because of a strained oblique.

"Are we?" Orioles manager Buck Showalter said when asked about the .500 mark. "I haven't looked at it in a week or so."

Showalter's avoidance is understandable. During their five-game skid, the Orioles have been outscored 54-16.

Left-hander Wade Miley (2-4) was the latest Orioles pitcher to walk off the field with his head down. He surrendered six runs on six hits in 2 1/3 innings.

Miley did not mince words when it came to his performance.

"I just (stunk)," Miley said. "It's as simple as that. I feel like everything I threw up there, they put a barrel on. That's all there is to it. That game's on me."

"He gave us what he could," White Sox manager Rick Renteria said of Pelfrey. "We didn't want it to fall apart. You want to keep the lead."

Smith drove his first career home run to right-center field in the second inning to put the White Sox on top 2-0.

Chicago added four runs in the third to seize a 6-0 advantage. Jose Abreu, Garcia and Davidson each drove in a run during the barrage, which chased Miley from the game. A throwing error by Adam Jones in center field compounded the Orioles' problems and allowed another run to score.

Baltimore trimmed the deficit to 6-2 in the fourth. Seth Smith ripped a ground-rule double over the center-field wall to score Welington Castillo, and Smith scored moments later on Jones' single to left field.

Garcia drove in two more runs with a single in the fourth to make it 8-2.

Smith added a sacrifice fly in the fifth.

A solo shot by Davidson gave the White Sox a 10-2 lead in the seventh.

Baltimore scored four runs in the eighth to close the gap to 10-6. Hyun Soo Kim drove in one run with a single, and Mancini followed with a three-run home run that sneaked over the right-field wall.

Jonathan Schoop finished the scoring in the ninth with an RBI single to left-center field. White Sox left fielder Melky Cabrera threw out Schoop at second base to end the game.

NOTES: Orioles 1B Chris Davis left the game in the third inning because of a strained right oblique muscle. The 31-year-old appeared to injure himself while flying out to deep right-center field. He is hitting .226 with 14 home runs and 26 RBIs in 61 games. ... White Sox OF Leury Garcia did not play because of an injured left hand. ... Orioles 3B Manny Machado returned to the lineup after missing four games because of a strained left wrist. He went 2-for-4. ... White Sox RHP Nate Jones experienced a setback and has halted his throwing program in his attempted return from a right elbow injury. The 31-year-old has been on the disabled list since May 4. ... The Orioles recalled RHP Miguel Castro from Triple-A Norfolk and optioned RHP Logan Verrett to Norfolk.