The Nationals' Joe Ross struck out 12 in Washington's 6-1 victory over the Baltimore Orioles. File photo by Bill Greenblatt/UPI | License Photo

WASHINGTON -- Having arrived back from the west coast earlier in the day, Washington manager Dusty Baker decided to give three of his everyday starters a night off on Thursday in a makeup game at Nationals Park.

The Nationals fielded a lineup that did not include first baseman Ryan Zimmerman (.362), second baseman Daniel Murphy (.336) and third baseman Anthony Rendon (.291) as they got some rest.

But the Nationals reserves had solid nights and starting pitcher Joe Ross had a great night, striking out a career-high 12 batters in a 6-1 win over the Baltimore Orioles.

"They want to play," Nationals shortstop Trea Turner said of reserves Stephen Drew, Wilmer Difo and Brian Goodwin who got rare starts. "When they get in the lineup and the opportunity to play they play very well and play very hard. I thought we had some great at-bats."

Drew, who had two hits and drove in two, was the only position player on either team who didn't strike out. The Orioles fanned 15 times, and 26 of the 51 outs came via a punch-out.

"We didn't do much with the bats obviously," said Orioles manager Buck Showalter.

The Orioles also played without All-Star third baseman Manny Machado, who hurt his left wrist in a play at third on Wednesday in Baltimore against the Pittsburgh Pirates.

"I think we will have a better idea tomorrow," Showalter said of Machado's condition. "We were challenged the last two nights."

Ross was coming off an ugly start Saturday as he gave up six earned runs in three innings at Oakland. But Baker still saw some encouraging signs from Ross, who began the year at Triple-A Syracuse.

"The slider is one of his main pitches," Baker said of Ross, who reached double digits in strikeouts for the second time in his career.

"It is big for the pitcher," said Turner, who led off the first with a walk and later scored.

Bryce Harper added three hits, an RBI, a run scored and a stolen base for Washington.

The nearby foes split the four-game season series after the Orioles had won the season series the previous five seasons. The first-place Nationals (38-21) are 17-9 at home while the third-place Orioles (31-27) fell to 10-17 on the road.

The losing pitcher was Baltimore starter Alec Asher (2-4), who had defeated the Boston Red Sox in his previous outing. The game was a makeup of a May 11 rainout in Washington. Mark Trumbo had two hits for the Orioles.

Asher (2-4) labored through a 41-pitch first inning as the Nationals put four runs on the board before many fans could find their seats.

Harper drove in a run with an infield single, Drew had an RBI single, and Michael A. Taylor had a rare hit to right field as he laced a two-run double near the line to make it 4-0.

Turner singled in the second, went to second on a walk, stole third and scored on a sacrifice fly by Adam Lind to make it 5-0.

Ross, meanwhile, was as effective as Asher was laboring. The Washington right-hander struck out the side in the second and fifth.

Asher gave up five runs, seven hits and four walks with six strikeouts in four innings. He threw a whopping 100 pitches -- only 59 for strikes -- and was replaced by Ubaldo Jimenez in the fifth.

Drew, the first batter to face Jimenez, hit a solo homer to make it 6-0.

"I was proud of Chris tonight," Showalter said.

NOTES: Orioles 3B Manny Machado (left wrist soreness) did not play Thursday after he left Wednesday's game in the top of the fourth inning in Baltimore. Pirates OF Andrew McCutchen slid into Machado on a steal of third in the second inning. ... Washington RHP Tanner Roark (6-2, 2.95) will face RHP Andrew Cashner (2-5, 3.39) of the Texas Rangers on Friday at Nationals Park. ... Baltimore RHP Dylan Bundy (6-4, 2.93) will oppose Yankees LHP Jordan Montgomery (3-4, 3.67) on Friday in New York. ... Nationals RHP Joe Blanton (right shoulder inflammation) began a rehab assignment at Double-A Harrisburg on Thursday. The veteran reliever has been on the disabled list since May 17 and is 0-2 with a 9.49 ERA in 14 games. He threw a scoreless inning with two strikeouts for Harrisburg. 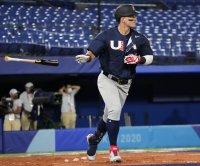