He even dressed in short sleeves to prove it.

Gonzalez braved a chilly night at AT&T Park by pitching into the seventh inning and aiding his own cause with an RBI single, helping the Nationals outlast the San Francisco Giants 6-3.

Both players appealed their suspensions and remained eligible to play Tuesday. Harper went 0-for-5 with three strikeouts; Strickland saw no action.

"Never thought about it," Gonzalez said of pitching on a night when some expected retaliation for Monday's beaning. "That was done (Monday)."

Handed a 2-0 lead before even taking the mound, Gonzalez (4-1) worked around eight hits and three walks to limit the Giants to three runs in 6 1/3 innings. He struck out six while winning for the first time since April 27.

He admitted afterward that the cold wind that blew in his face helped get him through 108 pitches.

"It was freezing," he said, "but I like the cold weather. I know how to pitch with it. It's easy to breathe. You feel clear in your lungs."

Gonzalez, a .158 hitter entering the game, delivered a run-scoring single in the second inning that increased the Washington lead to 3-0. The hit plated Michael Taylor, who had singled and taken second on Giants catcher Buster Posey's throwing error.

Trea Turner and Daniel Murphy had three hits apiece for the Nationals, who outhit the Giants 14-9 and extended San Francisco starter Jeff Samardzija to 100 pitches in just four innings.

"I liked it a lot," Nationals manager Dusty Baker said of the offensive fireworks. "We had a chance to break that game open in the second. (Samardzija) got out of it, but we were able to get his pitch count up."

Turner's first hit, a single, led off the Nationals' two-run first inning against Samardzija (1-7). The Washington leadoff man scored on a two-out double by Ryan Zimmerman, who in turn came around to make it 2-0 on a single by Murphy.

Taylor and Jayson Werth had two hits apiece for the Nationals, who won for the seventh time in their past nine games.

Right-hander Matt Albers followed up Gonzalez with 1 2/3 innings of one-hit, scoreless relief. Closer Koda Glover recorded his second save in two nights, his seventh of the season, with a 1-2-3 ninth.

Posey had three hits and an RBI for the Giants, who lost despite an impressive outing by outfielder Orlando Calixte in his debut with the club.

Promoted from Triple-A Sacramento earlier in the day, Calixte recorded his first major league hit to lead off the bottom of the first inning.

He then drove in two of the Giants' three runs with a double in the second, and he wound up playing all three outfield positions over the course of the nine innings, becoming the first Giant to do so since Randy Winn in 2009.

"He was probably wondering where he was going to play," Bochy said of his starting left fielder. "He did a real nice job, didn't he?"

Samardzija allowed the first three Nationals runs before leaving after four innings with a distinction.

The second-year Giant became only the fourth pitcher since 1913 to record no walks when throwing 100 or more pitches in four or fewer innings. Only Bryan Rekar (2001), Luke Hochevar (2009) and Rick Porcello (2012) did it previously.

"They made me work out there," Samardzija said. "I found myself in a lot of 2-2 counts, trying to make big pitches late in the count. So you tip your cap to their hitters."

The Nationals led just 3-2 before Giants reliever Bryan Morris allowed four consecutive hits and committed a costly error in a three-run fifth inning. Taylor had the big hit of the inning, a two-run single.

NOTES: Nationals manager Dusty Baker wasn't happy with RF Bryce Harper's suspension, insisting before the game, "I just don't think that the judges, whoever the judges were, have ever been in the situation. Probably only Martin Luther King (Jr.) or Gandhi would have turned the other cheek and not done something reactionary." ... Having seen the incident on television while attending school at nearby Stanford, swimming star Katie Ledecky tweeted a note to her friend Harper, offering, "If you end up suspended, come on down to Palo Alto and hang out at the pool for a day." ... The Giants announced Tuesday that 1B Michael Morse sustained a concussion when he collided with teammate RHP Jeff Samardzija during the Monday fight. He was placed on the seven-day concussion disabled list. ... The Giants promoted two players from Triple-A Sacramento: LF Orlando Calixte, who took Morse's spot on the active roster, and INF/OF Kelby Tomlinson, who replaced OF Mac Williamson, who was demoted to Sacramento. 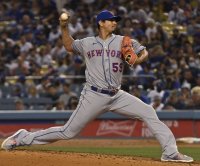