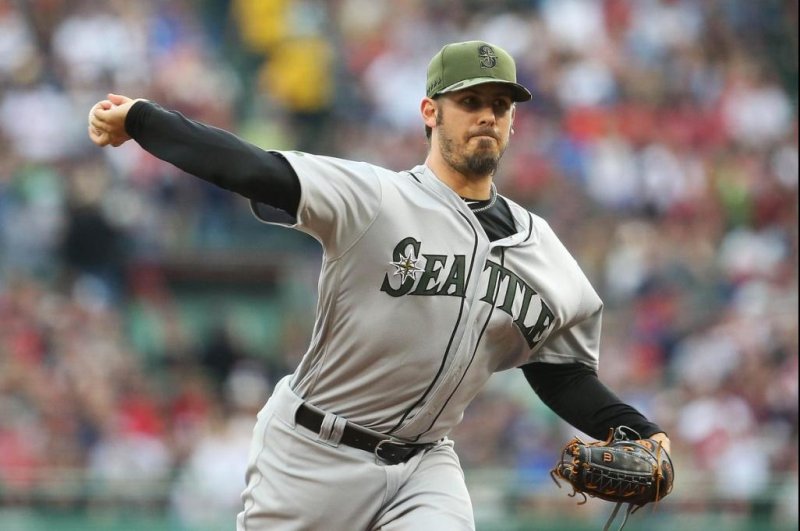 BOSTON -- It was the Boston Red Sox's turn to be embarrassed on Sunday.

One day after slugger Nelson Cruz labeled Seattle's recent offense output "embarrassing," the Mariners matched a season high with 16 hits in a 5-0 rout at Fenway Park.

Cruz drove in a run, Robinson Cano hit a two-run homer, his ninth home run of the season, and Guillermo Heredia added a solo homer, his third, as Seattle bounced back after being outscored 9-0 in the first two games of the series.

"We got some big hits, a lot of hits today," Mariners manager Scott Servais said. "I thought our offensive approach, we were much more aggressive on the fastball. Guys showed up ready to play today, so it was a good day."

Seattle (22-29) had been outscored 52-9 in losing seven of its last eight games coming in to Sunday.

"We've been preparing well, but things haven't been working out," Heredia said through a translator. "Something like this helps with (my) self-esteem and the team's self-esteem."

Mariners starter Christian Bergman (2-2) did his part with seven scoreless innings, allowing four hits and two walks with two strikeouts while reaching the seven-inning plateau for just the second time in 60 career outings.

Bergman was shelled for 10 runs and 14 hits in a four-inning loss to the Washington Nationals in his most recent start last Tuesday.

Dustin Pedroia had two of the Red Sox's five hits and Xander Bogaerts extended his hitting streak to seven games with his first-inning single.

The loss snapped a major-league-leading six-game winning streak for Boston (27-22), which finished its homestand at 5-1.

"I think any time you go 5-1 on a homestand, it's a good week of baseball here," Red Sox manager John Farrell said.

Red Sox starter Rick Porcello (3-6) limited the Mariners to two runs and walked one while striking out six in 6 1/3 innings but surrendered a season-high-tying 11 hits.

"For the most part, I kept them off the board," Porcello said, "but (I) definitely would like to be a little bit more consistent early in the count and not give up as many hits as I did, allow that many baserunners."

The reigning American League Cy Young Award winner has allowed nine or more hits in four consecutive starts and five overall this season, the highest total in the majors.

It marked the first occurrence of three consecutive shutouts at Fenway Park since Sept. 25-27, 2015, when the Red Sox outscored the Baltimore Orioles 17-0 in a sweep.

Seattle had not scored in 23 consecutive innings before Kyle Seager charged home from third base on a wild pitch from Porcello with one out in the Mariners' fourth.

Boston grounded into double plays in each of the first four innings, including three inning-ending turns.

"(Bergman) was keeping the ball down, he (had) a little late life, good movement to the ball," Servais said. "When you stay at the bottom of the strike zone, good things will happen."

Cruz doubled the lead on his two-out RBI single in the seventh to diving Red Sox shortstop Bogaerts, who snagged the ball but was off target on his throw to first.

Heredia hit a 401-foot blast over the Green Monster in left an inning later.