By Gethin Coolbaugh, The Sports Xchange

BOSTON -- It's finally over.

After four days of beanings, a racial scandal and a questionable ejection, the heated series between Baltimore and the Boston Red Sox concluded with the Orioles' 8-3 win Thursday night.

At last, the nonsense came to an end.

"What nonsense?" Orioles third baseman Manny Machado said tongue-in-cheek after being at the center of the drama -- and hitting a monster three-run homer in the series finale.

After controversially spiking Boston star Dustin Pedroia on a late-game slide in Baltimore nearly two weeks ago on April 22, Machado was thrown at by Red Sox ace Chris Sale on Tuesday.

Machado, who was also buzzed by Boston's Matt Barnes back in Baltimore, went on an expletive-filled tirade after that game and said he lost all respect for the Red Sox's organization.

On the next day, Orioles pitcher Kevin Gasuman was ejected after hitting Boston's Xander Bogaerts with a 76 mph curveball, which was thought by many to be accidental.

Even Game 1 on Monday carried some drama as Dylan Bundy plunked American League MVP runner-up Mookie Betts on the thigh.

"Whatever happens in between the (lines) stays in between the lines, so we've just got to go out there and control what we can control and go about our business," Machado said.

Thursday's game was finally all about baseball.

Machado hit his seventh homer of the season -- three came in the four-game set with Boston -- and Seth Smith smacked four hits, drove in two runs and even stole home.

Adam Jones, who said he was targeted with racial slurs by fans at Fenway Park in the series opener, sparking a national controversy, and J.J. Hardy each had an RBI for the O's.

Orioles right-hander Tyler Wilson (2-1) gave up three runs and six hits with one strikeout in his six-inning spot start.

Baltimore (17-10) knocked a season-high-tying 17 hits as the Orioles earned a split of the series with Boston (15-13). The Orioles had lost two straight and five of their previous eight games.

"We actually seemed like we played a baseball game tonight instead of all the drama, so we're looking forward to getting back in that flow again," Orioles manager Buck Showalter said.

Dustin Pedroia slugged a solo homer to move into sole possession of eighth place on the Red Sox's career hits list with 1,708.

It was the former AL MVP's first dinger in 29 games dating back to last Sept. 25 at Tampa Bay.

Xander Bogaerts also drove in a run for Boston.

Red Sox starter Kyle Kendrick (0-1) allowed six runs, eight hits and two walks with one strikeout in four innings. It was his first major league start since Oct. 2, 2015, with Colorado.

"It wasn't the game that I planned to have," Kendrick said. "All I can do is get ready for my next start, throw well in the next one and this one's forgotten about."

Boston finished its nine-game homestand that saw it take two out of three games against the Chicago Cubs and lose twice to the AL East-leading New York Yankees at 4-5.

"There was a lot here over the 10, 11 days that we were here," Red Sox manager John Farrell said. "Unfortunately, the bottom line is 4-5 is not what you're looking to do on the homestand against good teams."

Andrew Benintendi teased a game-changing grand slam with two outs in the Red Sox's seventh, but his deep fly ball to right field was tracked down by defensive replacement Joey Rickard.

Baltimore led 8-3 through five innings after RBI singles from Hardy and Jones in the fifth.

Machado provided the highlight of the Orioles' five-run fourth with a 466-foot homer that cleared the Green Monster in left. Smith preceded the blast with a two-run double.

Boston led 3-1 after Pedroia's homer in the third. Smith's steal of home on a double steal put Baltimore on the board in the top half of the inning.

"It's a little different than a traditional stolen base, so it's really just a circumstantial thing where they said go if they throw at second, and I went," said Smith, who had not stolen a base since May 20, 2014.

Bogaerts' first-inning RBI single produced two runs as Hanley Ramirez astutely scored from first on the play when Bogaerts got caught in a pickle between first and second.

MLB // 6 hours ago
Red Sox fan catches two home runs in same inning
May 18 (UPI) -- A Boston Red Sox fan suffered through a blowout loss, but went home with a couple of souvenirs, as he caught two home run balls in the same inning at Fenway Park. 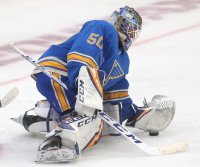