The Boston Red Sox permanently banned a man from Fenway Park who they said used a racial slur toward another fan at Tuesday's game.

The incident is separate from the insults directed at Baltimore Orioles outfielder Adam Jones in Monday's game, although the team said it is taking the matter just as seriously.

"The Red Sox organization will not tolerate the use of racial slurs at Fenway Park, and we have apologized to those affected," the team said in a statement. "There is no place for racial epithets at Fenway Park, in baseball, or in our society. The Red Sox have turned the matter over to the Boston Police Department, who will further investigate with their civil rights unit and determine whether it merits further action."

The Red Sox did not divulge the identity of the initial fan.

"It's unprecedented, I think, in baseball," Red Sox president Sam Kennedy said of having a fan banned for life from a ballpark.

According to the Boston Globe, a fan named Calvin Hennick reported the incident Tuesday to an usher at Fenway Park, who notified stadium security. The man who received the ban reportedly denied using the slur.

A Kenyan woman sang the national anthem before the game, and Hennick said that a man he described as white, middle-aged and wearing a Red Sox hat and T-shirt leaned over to him and used a racially insensitive word while assessing her performance.

RELATED Guy proposes at Fenway Park; 'she said no'

Hennick, a white man who was attending the game with his son and father-in-law, who is black, told the Boston Globe that he was "aghast" at the remark.

Hennick said he asked the man to repeat his statement.

"Yes, that's what I said, and I stand by it," Hennick said the man told him. When told that kind of language was not acceptable, the man reportedly said to Hennick, "Why not?"

The incident comes on the heels of Jones being racially taunted during Monday's series opener in Boston.

Jones said fans on Monday night threw a bag of peanuts at him and berated him using the N-word.

The Red Sox apologized to Jones, as did the mayor of Boston and the governor of Massachusetts. 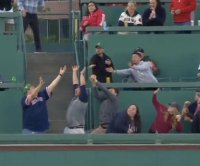 MLB // 6 hours ago
Red Sox fan catches two home runs in same inning
May 18 (UPI) -- A Boston Red Sox fan suffered through a blowout loss, but went home with a couple of souvenirs, as he caught two home run balls in the same inning at Fenway Park.