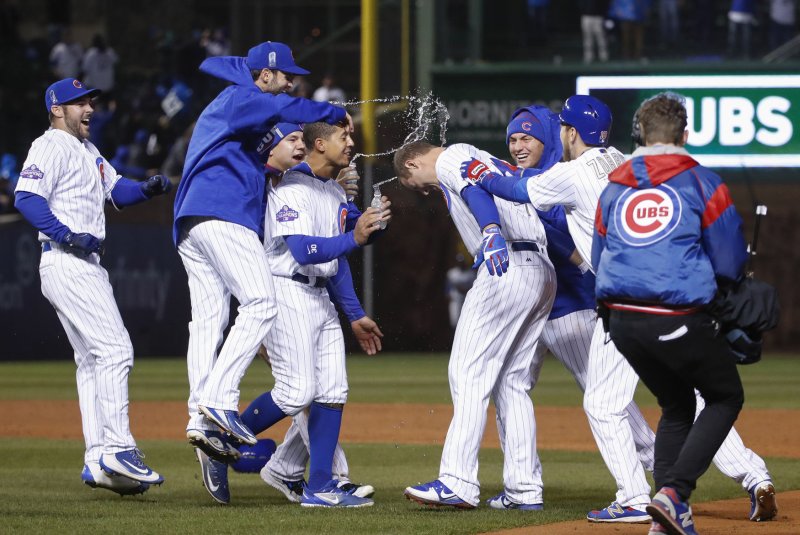 Fans wait during a rain delay for the opening day game between the Chicago Cubs and Los Angeles Dodgers at Wrigley Field on April 10, 2017 in Chicago. Photo by Kamil Krzaczynski . | License Photo

Fans arrive for the home opening day game between the Chicago Cubs and Los Angeles Dodgers at Wrigley Field on April 10, 2017 in Chicago. Photo by Kamil Krzaczynski . | License Photo

Fans arrive for the home opening day game between the Chicago Cubs and Los Angeles Dodgers at Wrigley Field on April 10, 2017 in Chicago. Photo by Kamil Krzaczynski . | License Photo

The reigning World Series winners capped an evening of celebration with a walk-off 3-2 victory over the Los Angeles Dodgers in a rain-delayed game that drifted into the early hours of Tuesday.

Anthony Rizzo lined a game-winning, ninth-inning single to left off Dodgers reliever Kenley Jansen with two outs to score Jon Jay from third. The hit snapped a 2-2 tie as the Cubs (5-2) captured their third consecutive win.

"Anthony worked a veteran, mature at-bat there against Jansen," Cubs manager Joe Maddon said. "If you try to do what you normally do against that fellow, he's going to eat you alive. (Rizzo) stayed inside the ball, he hit the ball the other way and didn't try to pull it."

RELATED A day 108 years in the making: Chicago Cubs to fly championship banner at home opener

The win capped a banner night as the Cubs raised their 2016 World Series flag and National League pennant in pregame ceremonies in front of an appreciative crowd of 41,166.

The ceremony and game were pushed back as waves of rain moved through Chicago, with the first pitch coming nearly two hours after the scheduled start time.

A hero's welcome for the champs. pic.twitter.com/8ELDIh2KBc

Pinch hitter Jay led off the ninth with a sharp single to right, reached second on Tommy La Stella's infield groundout and stole third as Kris Bryant struck out.
Advertisement

That left it up to Rizzo, who delivered on a 1-1 pitch.

"I executed my pitch," Jansen said. "He just fought it off, and he was strong enough to put it into play. (It was a) cutter, up and in. How many times are you going to see him do that? Not a lot."

Dodgers reliever Sergio Romo (0-1) worked 1 1/3 innings. He took the loss after giving up the leadoff single to Jay.

Wade Davis (1-0), the sixth Cubs pitcher, worked one inning for the victory as the Cubs won their third straight.

Cubs left-hander Jon Lester struck out seven and allowed just one run on four hits over six innings. He also drove in a run.

Lester gave up three hits and a run in the sixth as Corey Seager doubled in Joc Pederson with one out to trim Chicago's lead to 2-1.

The Dodgers tied the game 2-2 in the eighth after putting two runners on against reliever Pedro Strop.

Koji Uehara entered and nearly got out of the inning. Pinch hitter Chase Utley grounded to first, leading to a force play at second, but a throw by Addison Russell to first went wide and allowed Logan Forsythe to score the tying run.

"I think (Russell) hooked his foot on the throw," Maddon said. "That's what I thought I saw on the replay, and I think that's what caused the (wide) throw. It threw his arm stroke off."

Chicago took a 1-0 lead in the third when Kyle Schwarber walked with two outs and Bryant delivered an RBI double off the left field wall for the Cubs' first hit.

The Cubs added another in the fourth with bases loaded and one out. Lester drove in Russell with a fielder's choice grounder that forced Javier Baez at second base.

Los Angeles left fielder Franklin Gutierrez left in the second inning with a possible left hamstring injury after he was thrown out at second base attempting to steal. He was replaced by Scott Van Slyke.

"Franklin strains his hamstring a little bit -- I don't know the severity of it," Dodgers manager Dave Roberts said. "Later on in the game, JT (Justin Turner) has a little something wrong with the quad."

NOTES: Monday's game was the first at Wrigley Field featuring bullpens in their new locations beneath the left (home) and right field (visitor) bleachers. Fans and media cannot see into the bullpens from the field except through video feeds, but pitchers can see out. ... Dodgers manager Dave Roberts said LHP Rich Hill -- on the 10-day disabled list with a blister on his left middle finger -- was improving and could throw a bullpen session on Thursday in Chicago and possibly could start on Sunday against Arizona. ... The Dodgers send RHP Brandon McCarthy (1-0, 3.00 ERA) against Cubs RHP John Lackey (1-0, 4.50 ERA) as the series resumes on Wednesday. ... The Cubs were among nine major league teams -- and the last in the NL Central -- playing their first home games this week.