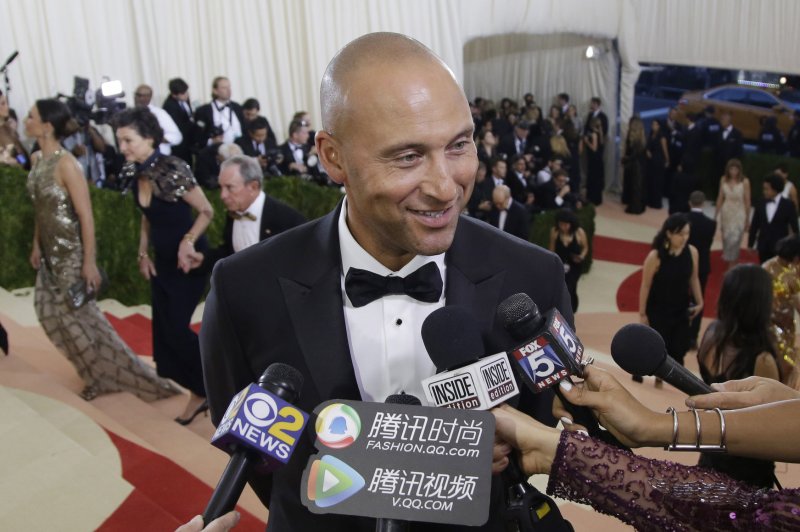 Derek Jeter arrives on the red carpet at the Costume Institute Benefit at The Metropolitan Museum of Art celebrating the opening of Manus x Machina: Fashion in an Age of Technology in New York City on May 2. File photo by John Angelillo/UPI | License Photo

Former Florida Gov. Jeb Bush is seen as he greets voters during a visit to a polling location on primary election day in Daniel Island, S.C., on February 20, 2016. File photo by Kevin Dietsch/UPI | License Photo

Former Florida Gov. Jeb Bush is seen in his car during a visit to a polling location on primary election day in Daniel Island, S.C., on February 20, 2016. File photo by Kevin Dietsch/UPI | License Photo

April 6 (UPI) -- New York Yankees legend Derek Jeter and former Florida Gov. Jeb Bush could be making a play to buy the Miami Marlins, sources with knowledge of the situation.

Fox Business reported Wednesday that Jeter and Bush were among three possible bidders who "have emerged to purchase" the franchise. A source in the financial industry confirmed the report to the South Florida Sun Sentinel. Major League Baseball is also aware of the report.

Bush is working with Citigroup to finance his bid and Goldman Sachs is backing the third bidder, the report said.

RELATED Watch Bryce Harper start the season with a blast

The Marlins [0-2] battle the Washington Nationals Thursday at 4:05 p.m. at Nationals Park.

MLB Commissioner Rob Manfred must approve the sale of any team. The sale has also been linked to former Massachusetts Gov. Mitt Romney and Joshua Kushner, brother of Donald Trump adviser Jared Kushner.

The Kushner family later backed out of the deal after current Marlins owner Jeffrey Loria was named as a candidate for an ambassadorship from Trump.

Jeter also has close ties to Marlins manager Don Mattingly, who was his Yankees teammate in 1995. Jeter previously expressed interest in purchasing a big-league club.

"He's always talked about it," Mattingly told the Sun Sentinel on Monday when asked about Jeter owning a team. "I asked him if he wanted to coach and he's like, 'Never.'

"I'm sure he'll be good [as a theoretical future owner of a team]. Jeets pretty much seems to be good at everything he tries to do."

Loria paid $158 million for the franchise in 2002. In February, Forbes reported there was a $1.6 billion agreement set up to buy the franchise.

"Talks are ongoing with other groups who are interested in purchasing the team," Samson told the Miami Herald. "The difference now is, those other offers are being looked at very seriously."

Bush resides in Miami, while Jeter lives in Tampa.