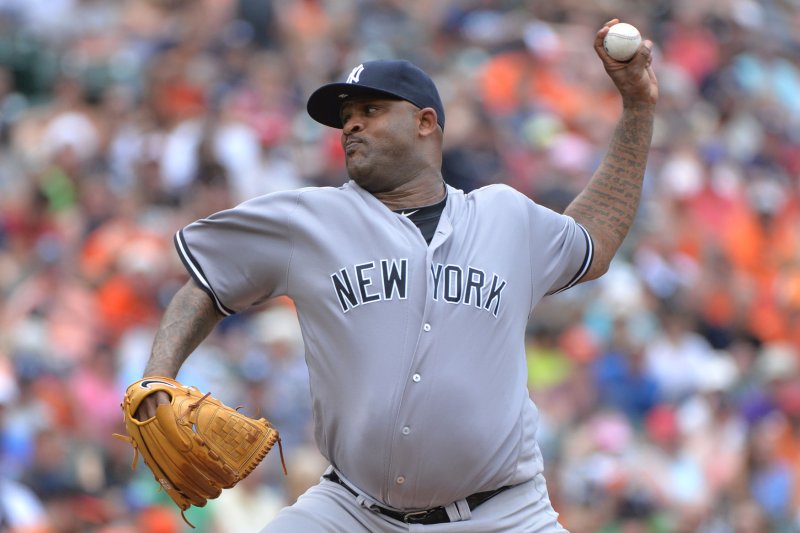 "His velocity was high for his first outing," Girardi said of Sabathia's season debut. "I thought his cutter was as good as it's been. I thought he threw some good backdoor sliders. He had good command. He gave us what we needed after losing the first game."

Sabathia (1-0) threw 85 pitches but held the Rays to three singles -- two of them didn't make it out of the infield. The Yankees gave him all the support he needed in a five-hit, three-run third inning.

Rays starter Jake Odorizzi (0-1) held the Yankees to two hits in his other five innings, but one bad inning was enough to sink Tampa Bay.

"I thought Odo threw the ball really well. We were all happy. It was a unique line that he had," Rays manager Kevin Cash said. "He was never in any jam, it seemed like. He just controlled the game. You take away the home run and after that, there was no jam for him."

The teams close out their opening series Wednesday night.

The Yankees' big hits came from the bottom of the lineup -- No. 9 hitter Ronald Torreyes hit a two-run homer in the third, and No. 7 hitter Chase Headley added a solo home run in the sixth and an RBI single in the eighth.

"We got some contributions from everyone, and the roof," said Girardi, referencing a double that simply dropped in as left fielder Peter Bourjos, playing in his first game with the Rays, lost track of Matt Holliday's high pop in the stadium's white roof. "I don't think it hit anything. I think he just lost it."

The Rays, after getting 13 hits in Sunday's opener, had five singles Tuesday, only one of them making it out of the infield.

"He really pitched. Not surprising -- this is a guy we've had plenty of battles with," Cash said. "His efficiency, he has that ability to keep it off the barrel. I don't think it was any fault of the hitters. You have to credit CC for his performance."

New York's bullpen was superb in relief of Sabathia.

The Yankees got a perfect inning each from Bryan Mitchell and Tyler Clippard. In the eighth, the Rays got two infield singles off Jonathan Holder, but Dellin Betances came in and ended the rally with a key strikeout of Rickie Weeks and by inducing a bases-loaded groundout from pinch hitter Logan Morrison.

Evan Longoria's first-inning single was the only hit in the first three innings against Sabathia. The Rays had infield singles in the fourth and fifth to put two on with two outs in each inning, but Sabathia got groundouts to end each threat.

Headley's solo home run in the sixth extended the Yankees' lead to 4-0.

NOTES: Rays C Wilson Ramos, on the 60-day disabled list to start the season, was presented with his 2016 Silver Slugger award before the game, chosen as the National League catcher by managers last season. ... Five Rays made their Tampa Bay debut, with Peter Bourjos starting in left field, Rickie Weeks at first and rookie Daniel Robertson making his major league debut as designated hitter. RHP Jumbo Diaz made his debut in relief of RHP Jake Odorizzi in the seventh inning, and RHP Tommy Hunter made his debut in the ninth. ... Yankees LHP CC Sabathia is pitching in his 17th major league season -- second among active pitchers behind only Braves RHP Bartolo Colon, who is in his 20th season. ... 2B Starlin Castro and 3B Chase Headley on Sunday became the first Yankees teammates to get three-plus hits on Opening Day since 2006, when Hideki Matsui, Johnny Damon and Alex Rodriguez did it against Oakland.