Washington Nationals' left fielder Jason Werth celebrates in the dugout with teammates after after hitting closer Kenley JansenÕs second pitch of the inning 450 feet, deep into the left-field bleachers for a solo home run during the ninth inning in game 3 of the National League Division Series at Dodger Stadium in Los Angeles on October 10, 2016. The Nationals defeated the Dodgers 8-3 to lead the best-of-five series 2-1. Photo by Jim Ruymen/UPI | License Photo

Although Werth didn't knock the ball out of the park with a ninth-inning home run, the outfielder and the Nationals put the Los Angeles Dodgers on the ropes in their National League Division Series.

Anthony Rendon also homered and the Nationals moved within a win of advancing to the National League Championship Series by posting an 8-3 victory over the Dodgers on Monday at Dodger Stadium.

The Nationals bolted past the Dodgers with four runs in both the third and ninth innings to grab a 2-1 series lead. They can wrap up the best-of-five affair Tuesday in Los Angeles.

"That was big because we exploded, I think, in the third and then we didn't explode again until the ninth," Nationals manager Dusty Baker said. "And we were wondering like 'Man, we've got to score some more here' because this game is close and they have so much firepower over there, especially in a one-run game."

Reliever Sammy Solis (1-0) worked 1 2/3 scoreless innings for the Nationals, and Mark Melancon closed out the victory with a 1-2-3 ninth.

Rendon hit a two-run shot in the third, capping a four-run rally that gave Washington a 4-1 lead.

Werth, who was 3-for-4 with a walk and two RBIs, drilled a solo blast into the left field bleachers off Dodgers closer Kenley Jansen to lead off the ninth. Ryan Zimmerman added a two-run double for Washington, which pulled away with a four-run ninth.

"We had kind of a long night with the travel and everything, and I felt we had some momentum coming into the game," said Werth, referring to Sunday's win in Washington and flying cross country before the teams were forced to play Monday without a day off because of Saturday's rainout. "Then they got that run early. And when we answered back, I felt like we were in good shape."

Dodgers first-year manager Dave Roberts is confident his club can bounce back Tuesday.

"You know, it's been a long season. It's been a lot of highs and lows. But I know that there's no quit in our guys. So, we'll be ready (Tuesday) to win a baseball game. I can promise you that," Roberts said.

A bloop single by Werth and walks to Bryce Harper and Rendon allowed the Nationals to load the bases with two outs in the first. However, Maeda fanned Zimmerman to end the threat.

In the bottom of the inning, Seager's RBI double scored Justin Turner for a 1-0 Los Angeles lead.

However, the Nationals rallied in the third. An RBI double by Werth and a run-scoring single by Harper put Washington up by a run before Rendon smacked a two-run homer to left for a three-run advantage. It was Rendon's first home run of the postseason.

Ruiz delivered a two-run pinch-homer with one out in the fifth to cut the gap to 4-3. It marked the first time the Dodgers launched a postseason pinch-home run since Orlando Hudson hit one in the 2009 National League Championship Series. For Ruiz, it was his first of the playoffs.

But it matters little if the Dodgers lose Game 4.

"I thought there was some some good at-bats in there," Roberts said. "I think that we hit some balls, we squared up some baseballs, and you know right at those guys. It could have been a different game."

NOTES: The Nationals dropped all three of their regular-season game at Dodger Stadium in June. They were 1-5 overall against the Dodgers with LHP Gio Gonzalez getting the lone victory in Washington. ... Dodgers RF Yasiel Puig got his first start of the series and went 0-for-3. Charlie Culberson started at second base instead of left-handed-hitting Chase Utley so manager Dave Roberts could get another right-handed batter in the lineup against Gonzalez. Culberson also finished 0-for-3. ... Former Dodgers pitcher Orel Hershiser threw out the ceremonial first pitch with former teammate Steve Sax serving as his catcher. ... Los Angeles is considering LHP Julio Urias or bringing back LHP Clayton Kershaw as the starter for Game 4. The rookie left-hander Julio Urias

, but Washington had not announced its Game 4 pitcher before the start of Monday's game. ... Game 5, if necessary, is slated for Thursday at Nationals Park. 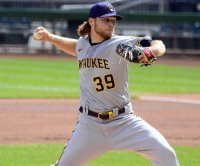