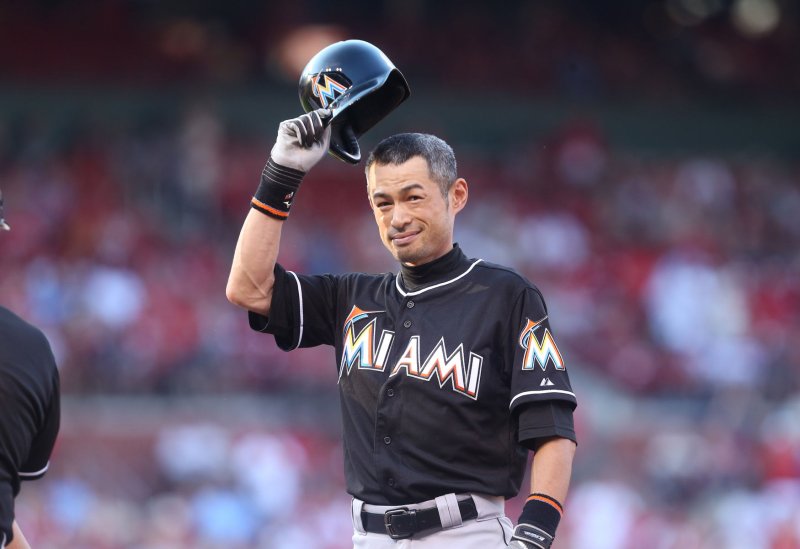 SAN DIEGO -- Adeiny Hechavarria drove in four runs with a bases-loaded triple and a double, and Martin Prado had three RBIs off a homer and two singles Monday night as the Miami Marlins defeated the San Diego Padres 13-4 at Petco Park.

Miami left-hander Wei-Yin Chen (4-2) got the win despite yielding four solo homers in six innings. He gave up six hits and one walk while striking out seven.

The Marlins had 19 hits, including three by Ichiro Suzuki, who is one hit shy of tying Pete Rose's all-time professional record of 4,256 hits. Suzuki -- who was 3-for-4 with two walks, three runs and a RBI in the game -- also drew to with 23 hits of 3,000 for his major league career.

The Padres used five pitchers, but the only one who allowed fewer than two hits was catcher Christian Bethancourt, who gave up a single and a walk and struck out one in a scoreless ninth.

The Marlins scored seven runs in the top of the third against Padres starter Colin Rea (3-3) to turn a 1-1 tie into a rout.

However, five of the runs scored after Padres second baseman Adam Rosales dropped the throw on the front end of a potential, inning-ending double play.

Suzuki opened the inning with a single and scored on Prado's tiebreaking two-run homer into the left field seats.

Christian Yelich followed with a line-drive single and, after Rea struck out Marcell Ozuna, Justin Bour beat the Padres' shift for a second straight at-bat with an opposite-field single to left to put runners at the corners with one out.

Miami's J.T. Realmuto then hit a one-hopper to Padres third baseman Yangervis Solarte, who threw a strike to Rosales at the bag. However, Rosales dropped the throw, allowing Yelich to score. Derek Dietrich singled to load the bases.

Hechavarria cleared the bases with a three-run triple, then scored on Suzuki's second single of the inning.

Seattle had taken a 1-0 lead in the top of the first when Suzuki drew a game-opening walk from Rea, moved to second on a single by Prado and scored on Bour's two-out, shift-beating single to left.

The Padres tied the game in the bottom of the first when Wil Meyers hit the first of three homers allowed by Chen, a 371-foot, opposite-field shot to right. It was Myers' 14th homer of the season and seventh in the last 12 games.

Miami's big hits in the fifth were RBI doubles by Hechavarria and Yelich and run-scoring singles by Prado and Bour.

NOTES: Padres OF Travis Jankowski appeared to sustain an ankle strain while beating out an infield hit as a pinch hitter in the fifth. ... Ichiro Suzuki has 2,977 hits in the U.S. after getting 1,278 in nine seasons with Orix in Japan. ... Ichiro started in right Monday as struggling Mike Stanton was out of Miami's lineup Monday in what was called a scheduled day off. ... The Padres signed RHP Cal Quantrill, the eighth overall pick in the first round of the draft, on Monday. ... 3B Yangervis Solarte (thumb contusion) returned to the Padres starting lineup Sunday after missing one start. ... RHP Andrew Cashner's neck strain has improved to the point where the Padres aren't planning an MRI.

MLB // 5 days ago
Dodgers' Trevor Bauer allows one hit, strikes out nine in win vs. Rockies
April 14 (UPI) -- Reigning Cy Young Award winner Trevor Bauer was nearly flawless, as he allowed just one hit and had nine strikeouts in seven scoreless innings in a Los Angeles Dodgers shutout of the Colorado Rockies at Dodger Stadium.