Marisnick is throwing football to Springer in a dinosaur costume pic.twitter.com/ednsUjdTOt

HOUSTON, May 22 (UPI) -- The Houston Astros have a young core and it shows in its ability to stay loose.

The gimmick didn't help during the game, as the Astros fell 2-1 to the Texas Rangers. In fact, the Astros have now lost four straight games, heading into a home series Tuesday against the Baltimore Orioles.

So this happened before #Astros played the #Rangers...

That's George Springer everyone. And yes, he's a dinosaur. pic.twitter.com/5lE9c1dt2D 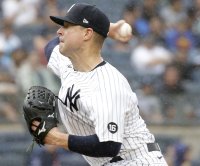