Winx and Beauty Generation, two of the world's top-rated horses, in weekend action 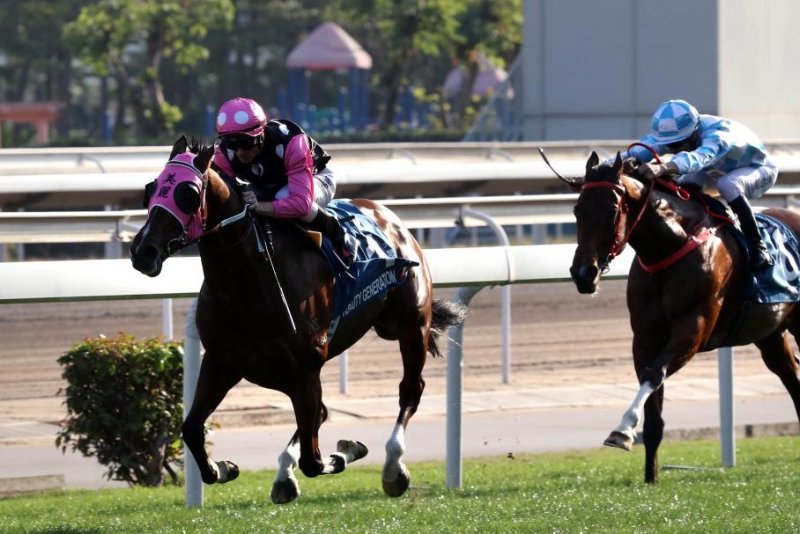 Two of the world's highest-rated horses are in action during the weekend -- Winx seeking her 30th straight win in Australia and Beauty Generation defending a winning streak of his own in Hong Kong.

Grade 1 racing returns to Japan with the February Stakes at Tokyo Racecourse, along with the third of four Japanese "Road to the Kentucky Derby" races.

And in Dubai, a trio of contenders for World Cup night honors strutted their stuff on Thursday night's program.

Winx is back. The super mare, like the battery bunny, just keeps going and going. This time she will be going 1,400 meters in her seasonal debut in the Group 2 The Star Apollo Stakes at Royal Randwick, seeking her 30th straight win.

There are seven rivals, none of whom would pose much threat if the mighty Street Cry mare is up to par following a nice rest after her historic fourth straight Cox Plate win in October. The Happy Clapper, who has seen Winx's hindquarters in eight previoius starts, is a bit of a course specialist but trainer Pat Webster said a second- or third-place finish in the Apollo would be a significant achievement

It is widely anticipated Winx, tied with Cracksman for the No. 1 spot on the Longines World's Best Racehorse listing, will have three more starts and retire after the Group 1 Queen Elizabeth Stakes April 13. But there's no stone tablet with that date chiseled onto it and it's worth remembering it was assumed in some quarters the Cox Plate four-peat would be her swan song.

Saturday's Group 1 Black Caviar Lightning Stakes is 1,000 meters at Flemington and features In Her Time.

Blue Point, winner of the Group 1 King's Stand last summer at Royal Ascot, kicked into gear with 300 meters to go in Thursday night's Group 2 Meydan Sprint and won geared down by jockey William Buick, by 5 lengths that could have been more. Faatinah was best of the others, 2 lengths in front of Portamento. Blue Point, a 5-year-old son of Shamardal, missed last year's Group 1 Al Quoz Sprint on World Cup night when he was scratched behind the gate but now is right on track to tackle that assignment on March 30 for Godolphin and trainer Charlie Appleby.

"He's a nice horse, this fellow," said Appleby, who scored his first-ever World Cup night win last year when Jungle Cat won the race after Blue Point's scratch. "Not having been fully tuned up, he ran well. This horse is going to come forward and come into his own this year. He's a 5-year-old now and he's a professional. William asked him to pick up and he ran a professional race. After this is the Al Quoz ... It's going to be a fun season for him."

Godolphin, Appleby and Buick made it a stakes double as Poetic Charm swung around the field turning for home in the Group 2 Balanchine and kicked away to win by 2 3/4 lengths over Mia Tesoro. Peri Lini was third. Poetic Charm, a 4-year-old Dubawi filly, ran 1,800 meters in 1:49.60 over firm going. It was her second win from two tries in the Dubai season following a disappointing 11th-place finish as the favorite in the Grade III Pin Oak Valley View at Keeneland in October.

"The combination of being drawn six of six and an extra furlong, it was important to get the first furlong right and then take it from there," Buick said of Poetic Charm's effort. It was lovely, a great performance. She has won two Group 2s now, so she will be looking for the elusive Group 1."

The third feature on the night, the Firebreak Stakes at 1 mile on the dirt, went to Muntazah, who overhauled the favorite, Heavy Metal, at mid-stretch and ran on well to win by 4 1/2 lengths. Secret Ambition was along to edge Heavy Metal for third. Muntazah, owned by Sheik Hamdan bin Rashid Al Maktoum, finished second to Heavy Metal in last year's Group 2 Godolphin Mile on World Cup night. The 6-year-old Dubawi gelding is trained by Doug Watson.

"He had to sit three-wide the whole way and picked up nicely when he went by (Heavy Metal)," Watson said. "He's in great shape and last year he got better at around this time and that showed it."

The Citi Hong Kong Gold Cup (G1) at 2,000 meters (about 1 1/4 miles) features a cast similar to that of the Longines Hong Kong Cup (G1) at the same distance in December. The upset winner of that heat, Glorious Forever, returns as do third-place finisher Time Warp and Northern Superstar and Gold Mount, who reported fifth and sixth.

Exultant, who stretched out to win at 2,400 meters (about 1 1/2 miles) in the Longines Hong Kong Vase on the December card, returns for this after demonstrating distance versatility with a victory at 1,800 meters (about 1 mile) in the Centenary Vase Jan. 27.

Eagle Way and the sometimes reluctant Pakistan Star also grace an expected field of 11 and Southern Legend seeks a ticket to Dubai.

Trainer Caspar Fownes sends Southern Legend 2,000 meters for the first time and understands the magnitude of the ask.

"I'm taking his equipment off for this race," Fownes said. "He'll go in there with no blinkers, no visor, no nothing. We'll just ride him where he's comfortable and see if he stays the trip out strongly. He gives the indication that he'll run it."

If he passes the test, the 6-year-old Not A Single Doubt gelding is booked for an early flight to Dubai and holds entries on both the turf and dirt at Meydan on Super Saturday, March 9, and World Cup night March 30.

Exultant, who had been mentioned as a Dubai candidate, will have to wait a year, trainer Tony Cruz said.

"Next year, when he's stronger and more mature, then we'll look at going over there for the Sheema Classic," Cruz said. In the meantime, Exultant has two more Group 1 events remaining on the Hong Kong schedule.

"He'll be champion stayer (in Hong Kong)," Cruz added. "I believe he has what it takes to do that."

While the stayers slug it out, much of the attention of the enthusiastic crowd will be focused on the companion Group 1 event, the Queen's Silver Jubilee Cup at 1,400 meters (about 7 furlongs), where Hong Kong's best runner and the world's top-rated turf miler, Beauty Generation, seeks his seventh straight victory.

Beauty Generation held off Beat the Clock to win this event in 2018 for owner Patrick Kwok Ho Chuen and trainer John Moore and also accounted for Group 1 wins in the Champions Mile in April, the Longines Hong Kong Mile in December and the Stewards Cup Jan. 20. Looking at that record, Moore acknowledged the 1,400 meters might be a bit sharp for his veteran.

"It's a fraction on the short side for him when you're going in against Beat The Clock and Conte," Moore said after watching Beauty Generation gallop over the Sha Tin course on Valentine's Day morning. "There is that question as to whether or not he's lost some of his early speed. Over the longer distance he'd just travel along in front, wind it up and kick and I don't think they'd catch him. But we've gone this way and he's ready for it."

Beauty Generation is No. 4 on the Longines' list and easily the world's top-rated turf miler.

The day's third feature is the Hong Kong Classic Cup, middle leg of the 4-year-old Series that culminates in the BMW Hong Kong Derby March 17. Despite the explosion of Group 1 events in Hong Kong and the frequent international lure of those, the Derby remains the race most local owners covet most highly.

The Grade 1 racing season kicks off on the Tokyo Racecourse dirt Sunday with the February Stakes at 1,600 meters (about 1 mile). The race is a Breeders' Cup Challenge "Win and You're In" race for the Breeders' Cup Classic.

The field includes Gold Dream, winner of both of Japan's Grade 1 mile races, the February Stakes and the Champions Cup, in 2017, and last year's February winner, Nonkono Yume.

A lot of the attention, however, will be on Inti, a 5-year-old son of Came Home. After a career-opening loss, Came Home has reeled off six straight wins, most recently in the Grade 2 Tokai TV Hai Tokai Stakes at Chukyo Jan. 20.

"It was a real test for him last time," said Came Home's trainer, Kenji Nonaka, who seeks his first top-level win. "But he got to the front and put in a strong run to win the race. There's a slight concern with him racing left-handed and how he corners out of the backstretch, but I was satisfied enough last time."

Came Home's cause is not hurt, at least with the public, by the presence in the irons of four-time February Stakes winner Yutaka Take.

Gold Dream, a 6-year-old by Gold Allure, finished second in the 2018 February Stakes and retains Japan's leading rider, Christophe Lemaire. Gold Dream used his 2017 February Cup win as a springboard to the Dubai World Cup Sponsored by Emirates Airline (G1) at 2,000 meters (about 1 1/4 miles) a month later, where he finished 14th behind Arrogate.

Nonkono Yume has not won in four starts since last year's triumph and finished seventh in the Champion's Cup in his most recent outing.

The race starts on the grass chute leading onto the backstretch of the dirt oval. One turn leads into the uphill climb through the early part of the Toyko Racecourse stretch.

On the same program is the Hyacinth Stakes for 3-year-olds. The dirt event is the third of four legs in the "Japan Road to the Kentucky Derby," with the points winner offered a guaranteed spot in the Run for the Roses.

The Kempton race, over 2 miles of Polytrack, is a qualifier for the Betway All-Weather Marathon Championship at Lingfield Park on Good Friday, April 19. Spark Plug, an 8-year-old son of Dylan Thomas, is the highest rated of the field but has yet to negotiate more than 1 1/2 miles.

Last season's All-Weather Mile champion, Lucky Team, is among 14 declared runners for the Prix Saonois over 1 mile at Cagnes-sur-Mer. Lucky Team came with a late run to land the Sun Racing All-Weather Mile Championship on Good Friday last year and Saturday's Polytrack contest is a Fast-Track Qualifier for the same race.

Science News // 1 hour ago
NASA names first person of Hispanic heritage as chief astronaut
Feb. 2 (UPI) -- Veteran astronaut Joe Acaba made history on Thursday when he was named chief of the Astronaut Office at NASA's Johnson Space Center in Houston.

Health News // 1 hour ago
Living near 'food swamp' may increase risk of stroke
Americans who live near a "food swamp" -- where fast food restaurants, convenience stores and other junk-food purveyors heavily outweigh healthier options -- may have a higher risk of suffering a stroke, a study found.

U.S. News // 2 hours ago
New polling shows Americans dissatisfied with state of the nation
Feb. 2 (UPI) -- Americans remain dissatisfied with broad aspects of U.S. society, continuing a trend that began at the start of the COVID-19 pandemic, new polling from Gallup indicates.
Advertisement