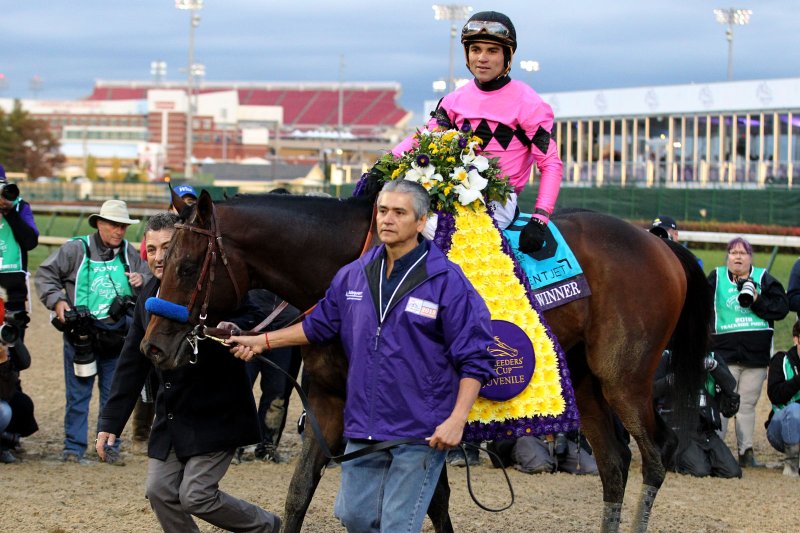 Jockey Joel Rosario celebrates with Game Winner after riding him to victory in Breeders Cup Juvenile race at the 2018 Breeders' Cup on Friday at Churchill Downs in Louisville, Kentucky. Photo by John Sommers II/UPI | License Photo

The five-race "Future Stars" card, featuring 2-year-olds on both turf and dirt, also might have turned up a prospect for the original Derby -- the one in England -- as well as next year's Kentucky Oaks.

The Breeders' Cup World Championships continue Saturday under the Twin Spires with nine races leading up to the $6 million Classic, which could crown the U.S. Horse of the Year.

Trained in Southern California by last year's Triple Crown winner, Bob Baffert, Game Winner got a bit of a slow start in the Juvenile and jockey Joel Rosario had to settle him behind the leaders early.

"He didn't get away real fast and after that I was just trying to get him going and get him in the right spot," Rosario said. "He broke fine, just not real quickly."

Game winner found himself chasing 40-1 long shot Knicks Go as the field turned onto the long Churchill Downs stretch and that one proved tough to reel in. The two bumped soundly just past mid-stretch as a tiring Knicks Go drifted outward but Rosario kept Game Winner going and he proved a game winner indeed, scoring by 2 1/4 lengths. Go Knicks was second, 6 1/4 lengths to the good of Signalman. Game winner, a Candy Ride colt owned by Gary and Mary West, ran 1 1/16 miles on a fast track in 1:43.67.

The win puts Game Winner at the top of the prospects list for the 2019 Kentucky Derby and Baffert clearly had that in mind. "That horse, he likes Churchill Downs. That's a good sign," he said.

"Of all the Breeders' Cup races, this was the one I really wanted," Baffert said. "There's nothing like a 2-year-old when you're thinking about the spring classics and all."

He added with a chuckle, "At the eighth pole, I was thinking about some roses."

Game Winner's first three victories came in Southern California. After his maiden win at Del Mar, he went on to take the Grade I Del Mar Futurity and Grade I American Pharoah at Santa Anita. He never really was challenged in any of those races.

Jaywalk took the lead the first time under the wire in the Juveline Fillies, held the advantage throughout and went on to win by a commanding 5 1/2 lengths. Restless Rider chased the pace and edged Vibrance for second. The favorite, Bellafina, raced right behind the winner into the stretch but ran out of gas and was all out to finish fourth.

Jaywalk, a gray daughter of Crosstalk, came to Churchill Downs after a victory in the Grade I Frizette at Belmont Park and, by victory of Friday's win, becomes the de facto early favorite for next year's Kentucky Oaks. The Frizette was a one-turn mile -- her first trip beyond 5 1/2 furlongs. The Juvenile Fillies was her first race around two turn and she finished 1 1/16 miles in a classy time of 1:43.62.

"Once she got out of the gate, she just wanted to go," said winning rider Joel Rosario. "She looks like she could do it again."

Trainer Jason Servis said Jawalk's "cruising speed is wicked. She just runs them off their feet ... Joel said that two jumps out of the gate, she just took him there."

Part owner Jonathan Green said the entire ownership team is excited about the chance of a Kentucky Oaks winner. "In a perfect world, it would be wonderful to see her here on the first Friday in May," he said.

Line of Duty saved ground behind the early speed in the Juvenile Turf, had to swing wide at the top of the stretch to find running room and was just up in time to score by 1/2 length over Uncle Benny. Somelikeithotbrown led the field into deep stretch and held on for third.

Line of Duty, with William Buick in the irons, ran 1 mile on turf officially rated "good" in 1:40.06. The course was saturated with a drenching rain Wednesday night and Thursday and still drying throughout the day Friday.

Line of Duty, a Galileo colt running in the colors of Sheik Mohammed's Godolphin racing, finished second twice in England before breaking through with his first win Sept. 4 at Goodwood. He jumped from that to a victory in the Group 2 Prix de Conde at Chantilly in France Oct. 1 before heading for Kentucky.

He had to wait for a review before wearing the purple and yellow Breeders' Cup winner's blanket as the stewards looked at a bump with Uncle Benny just before the wire. They took no action.

Buick said Line of Duty gets extra points because of how the race was won after he jumped out to a good start. "I had to rein him back and basically restart the race," the rider said. "By doing that, he had to work harder. That's another plus point for his performance."

Winning trainer Charlie Appleby, who has had a stellar year, said it's "a bit early" to talk about Line of Duty as a candidate for the Investec Derby next spring. And Godolphin manager Hugh Anderson pointed out Godolphin has had four impressive 2-year-old winners in England, Ireland and France in the past few weeks so Sheik Mohammed's cupboard of 2019 Classic contenders is overflowing.

Newspaperofrecord posted her third straight dominating win in the Juvenile Fillies Turf, leading all the way to a 6 3/4-lengths victory. East, a Frankel colt, came from the clouds to finish second, best of a very good European contingent. Stellar Agent was third.

Newspaperofrecord, with Irad Ortiz Jr. in the irons, won her first two starts by margins of 6 3/4 lengths and 6 1/2 lengths -- the latter in winning the Grade II Miss Grillo at Belmont Park Sept. 30.

"We were very confident," said winning trainer Chad Brown, "but you never know in an international field like this. She showed her class today." Asked if the filly now is a superstar, Brown said, "She is on her way." He said he will consider "next year, more than I ever have," contesting Royal Ascot with Newspaperofrecord.

Newspaperofrecord, an Irish-bred filly, is by Lope de Vega, out of the Holy Roman Emperor mare Sunday Times -- solid English and Irish breeding. Owner Seth Klarman said the name was taken, obviously, from the dam. "But I also think this is an important time for journalism ... We believe in searching out facts and society needs to get back to searching out facts and truth," he said.

Bulletin, making just his second career start, shot out of the gate like a bullet and was never behind, winning the first running of the Juvenile Turf Sprint by 2 3/4 lengths. Chelsea Cloisters mounted a determined challenge early in the stretch run, then could not sustain the effort and settled for second. Irish invader So Perfect came from well off the pace for third, gaining ground at the end.

One of the best-fancied European juveniles, Soldier's Call, missed the start badly, was hustled up by jockey Oisin Murphy and then tired in the stretch run to miss the frame.

Bulletin, a City Zip colt trained by Todd Pletcher, ran 5 1/2 furlongs on good turf in 1:05.54 with Javier Castellano up. He is owned by WinStar Farm, China Horse Club and SF Racing, all ownership partners in this year's Triple Crown winner Justify.

"He was very professional," Castellano said. "He broke like a shot and put me in a real good position. We were in good shape the whole way." WinStar's Elliott Walden added, "He started so fast, Javier lost an iron."

Bulletin won at first asking at Gulfstream Park Sept. 29 in the Hollywood Beach Stakes, leading all the way to a 7-lengths victory over firm turf.