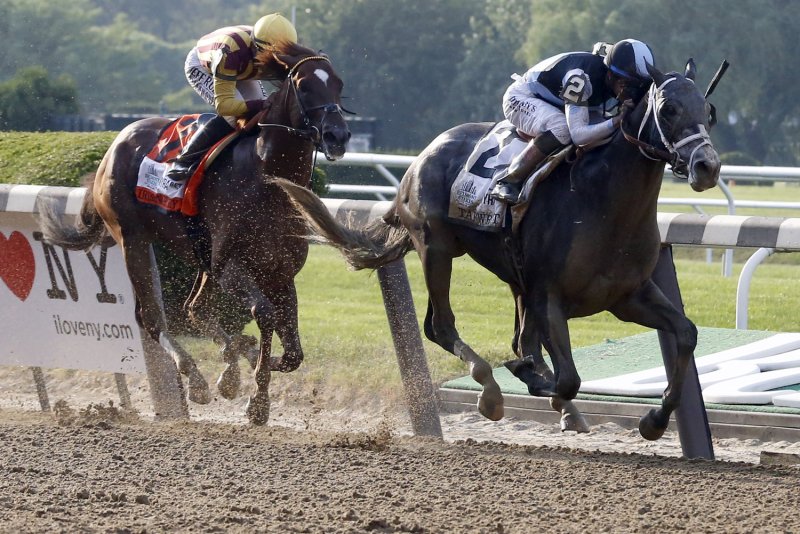 Tapwrit, ridden by Jose Ortiz, wins the 149th running of the Belmont Stake at Belmont Park in Elmont, New York on June 10, 2017. He is ahead of Irish War Cry, ridden by Rajiv Maragh. Photo by Mark Abraham/UPI | License Photo

Horses break from the gate at the start of the 149th running of the Belmont Stake at Belmont Park in Elmont, New York on June 10, 2017. Photo by Mark Abraham/UPI | License Photo

(L-R) Robert LaPenta, and George Isaacs, owners of Tapwrit, hoist the trophy with jockey Jose Ortiz after winning the 149th running of the Belmont Stake at at Belmont Park in Elmont, New York on June 10, 2017. Photo by Mark Abraham/UPI | License Photo

Tapwrit, ridden by Jose Ortiz, wins the 149th running of the Belmont Stake at at Belmont Park in Elmont, New York on June 10, 2017. Photo by Mark Abraham/UPI | License Photo

Tapwrit overtook favorite Irish War Cry deep in the stretch to win the Belmont Stakes on Saturday at Elmont, N.Y.

Tapwrit, with Jose Ortiz aboard, ran down Irish War Cry to win by two lengths in the 149th running of the third leg of horse racing's Triple Crown. The 3-year-old gray colt's winning time for the 1 1/2 miles was 2 minutes, 30.02 seconds.

"Tapwrit was getting a beautiful trip. It was everything we talked about in the paddock before the race," Tapwrit trainer Todd Pletcher said. "We were hoping he had enough when it came to crunch time. It looked like Irish War Cry still had a little something left, but the last sixteenth, he dug down deep."

Classic Empire, expected to be the favorite, had to be scratched earlier in the week due to a recurrence of an abscess in his right front hoof.

Epicharis, the early 4-1 second choice, was scratched Saturday morning after failing a prerace veterinary exam. The colt had been treated for lameness in his right front hoof earlier in the week.

Despite the subtractions in the race, Ortiz had no qualms with the result as he followed his brother's footsteps. His brother, Irad, won the race last year with Creator.

RELATED UPI Horse Racing Roundup: On Wings of Eagles the Derby is won

"It's a feeling I can't explain I'm very happy right now," Jose Ortiz said of guiding Tapwrit to victory at 5-1 odds in the 11-horse field.

Tapwrit returned $12.60, $6.50 and $5 for Pletcher, who won two legs of the Triple Crown following his victory with Always Dreaming in the Derby.

Pletcher credited the decision for Tapwrit to skip the Preakness as a strong reason as to why the horse was victorious on Saturday.

"We felt like with the five weeks in between, and with the way this horse had trained, that he had a legitimate chance," Pletcher said. "I think that's always an advantage."

Irish War Cry went for the early lead and was immediately pressured by Meantime, with Tapwrit settling in third. The positioning stayed the same until the final turn, when Tapwrit turned it on.

"At the eighth pole, I thought we might be home free," Irish War Cry trainer Graham Motion said. "But it's the Belmont. It's a tough race."