Tiger Woods hugs it out with former caddie 'Fluff' 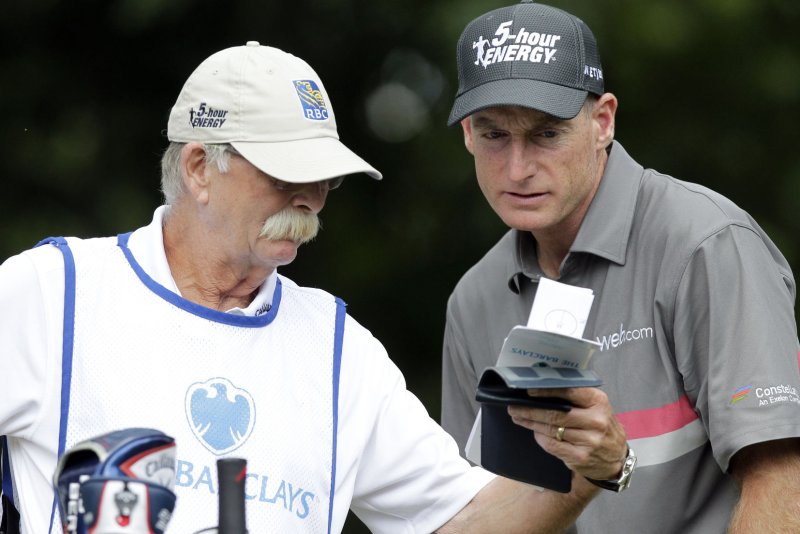 Jim Furyk and Caddie Mike 'Fluff' Cowan stand on the second tee box in the final round at The Barclays in 2014 at Ridgewood Country Club in Paramus, N.J. File Photo by John Angelillo/UPI | License Photo

June 28 (UPI) -- Former Tiger Woods caddie Mike "Fluff" Cowan and the golfing great linked up on the links for a nostalgic ball toss recently in Maryland.

Woods is in Potomac to participate in the 2018 Quicken Loans National tournament at TPC Potomac at Avenel Farm.

The PGA Tour posted a video Wednesday, showing the legendary duo dramatically walking toward each other. Cowan tosses a golf ball toward Woods, who snatches it out of the air with his right hand before hugging the caddie, similar to what he did after sinking a shot during their succesful tenure.

Woods and Cowan were paired from 1996 through 1999. Cowan was Woods' first PGA Tour caddie. Woods then went on to have Steve Williams caddie until 2011, when he switched to Joe LaCava.

RELATED Tiger Woods holes out for eagle at Memorial

"It's very simple," Woods told reporters Wednesday when asked what he has to do to win the tournament. "You have to drive it well. You cannot play out of this rough. You have to hit a lot of fairways. The greens are tough to get to if you don't hit fairways. With the rough being up, it's wet ... with the heat coming in here on the weekend, it's just going to keep on making it grow thicker and thicker and thicker."