Tiger Woods taking 3-to-4 weeks off after Masters 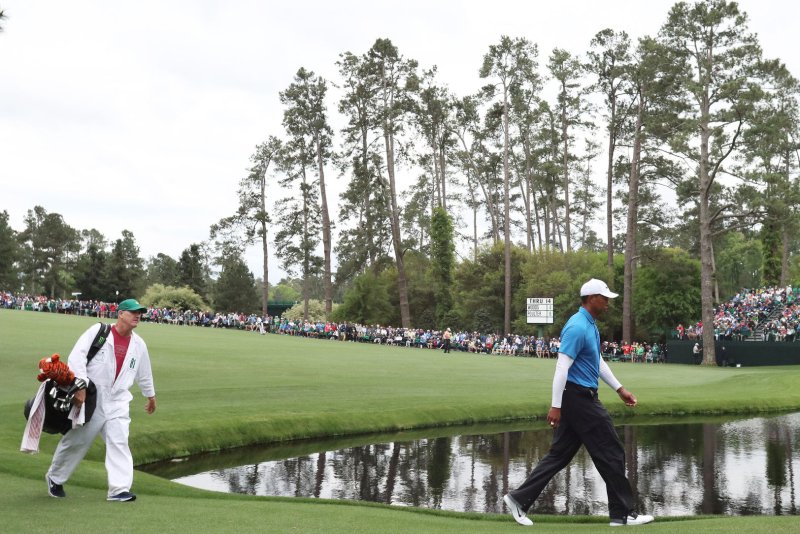 Tiger Woods walks to the No. 15 green during the 3rd round of the 2018 Masters Tournament Saturday at the Augusta National Golf Club in Augusta, Ga. Photo by John Angelillo/UPI | License Photo

Tiger Woods reacts after hitting a ball into water on the 12th hole in the 2nd round of the 2018 Masters Tournament Friday at the Augusta National Golf Club in Augusta, Ga. Photo by John Angelillo/UPI | License Photo

Tiger Woods lines up a shot from the trees on the 11th hole during the first round of the 2018 Masters Tournament Thursday at the Augusta National Golf Club in Augusta, Ga. Photo by Kevin Dietsch/UPI | License Photo

April 9 (UPI) -- Tiger Woods says he plans to take a three or four week break from golf after finishing tied for 32nd at the 2018 Masters Tournament.

The 14-time major championship winner carded a 1-over-par 73 in the first round on Thursday. He shot a 3-over-par 75 on Friday and shot even par in the third round.

Woods wrapped up the tournament Sunday with his best round, a 3-under-par 69.

"Generally after this tournament, I put away the clubs away for a while," Woods said after the tournament, according to his official website. "I usually take three to four weeks off. I put the clubs in the closet and just kind of get away."

Woods, 42, played "pain-free" at Augusta National Golf Club, according to his official website.

The Masters marked Woods's sixth tournament in 2018. He finished tied for 23rd in January's Farmers Insurance Open and missed the third-round cut in February's Genesis Open.

Woods heated up in late February, finishing 12th at the 2018 Honda Classic and tied for second at the 2018 Valspar Championship. Woods warmed up for Augusta with a fifth place finish in the Arnold Palmer Invitational at Bay Hill.

In 2015 -- the last time Woods played the Masters -- he entered the tournament with just two PGA Tour rounds under his belt. He played 11 tournaments on tour that year and resumed play after finishing 17th at the Masters by finishing 69th one month later at the Players Championship.

The 2018 Players Championship takes place from May 8 to May 13 at TPC Sawgrass in Ponte Vedra Beach, Fla.