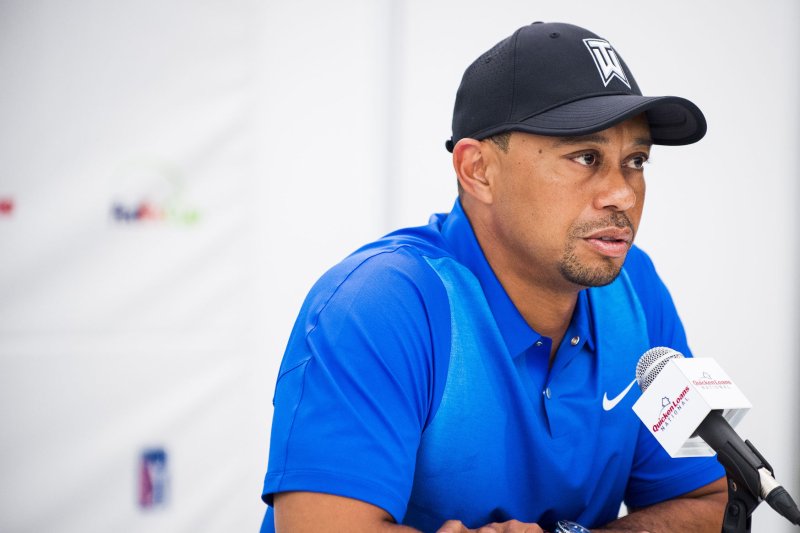 Professional golfer and tournament host, Tiger Woods, answers questions about his event and his health from the media during a press conference at the Quicken Loans National golf tournament on June 22, 2016, in Bethesda, Md. File photo by Pete Marovich/UPI | License Photo

Tiger Woods had Vicodin, Dilaudid, Xanax, Ambien and THC (tetrahydrocannabinol) in his system when he was arrested on suspicion of driving under the influence in May, according to a toxicology report released Monday.

Woods pleaded guilty to reckless driving and agreed to enter a diversion program that will allow the 41-year-old golfer to clear his record if he completes the program.

The Palm Beach County Sheriff's Office made the toxicology results public with there being no case for an active criminal investigation.

According to the report, the drugs in Woods' system were:

Hydrocodone, the generic form of a painkiller branded as Vicodin.

Alprazolam, a mood and sleep drug commonly known as Xanax. (The report also listed Alpha-Hydroxy Alprazolam, which is what Xanax becomes when it breaks down in the system.)

Delta-9 carboxy THC, a muscle relaxant that is also the substance the body metabolizes after marijuana is consumed.

It was not immediately known if Woods had prescriptions for all of the medications.

Woods was arrested around 2 a.m. on May 29 when officers found him unconscious in his Mercedes-Benz about 15 miles from his home in Jupiter, Fla. The car was awkwardly parked on the side of the road and the driver's side of the vehicle was damaged.

Woods was unable to tell officers where he was and he stumbled and had balance issues while taking field sobriety test. Woods told officers he was taking the painkiller Vicodin and the anxiety medicine Xanax to deal with pain from April back surgery.

The diversion program plan would call for Woods to spend one year on probation, pay a $250 fine plus court costs, attend a DUI course, perform 50 hours of community service and attend a workshop where victims of impaired drivers detail how their lives were damaged or affected.

As per the DUI charge, Woods would have faced up to six months in jail if convicted but more likely would have received probation.

Woods has 79 career PGA Tour victories but isn't currently playing after his latest back surgery -- his fourth overall. He won 14 majors, but the last one was in 2008 when he won the U.S. Open at Torrey Pines by outlasting Rocco Mediate in a memorable 19-hole playoff.