Rory McIlroy at the 146th Open Championship at Royal Birkdale Golf Club. File photo by Hugo Philpott/UPI
The fourth-ranked McIlroy would have been one of the favorites in the PGA Championship at Quail Hollow anyway because he won the regular-season PGA Tour event there in 2010 and 2015, and lost in a playoff to Rickie Fowler in 2012. However, he was struggling with his game recently before tying for fourth in the Open Championship at Royal Birkdale and tying for fifth last week in the WGC-Bridgestone Invitational at Firestone. McIlroy has claimed four major championships, but none since he captured the PGA for the second time in 2014 by one stroke over Phil Mickelson at Valhalla, after winning the final major of the year by eight strokes over David Lynn of England at Kiawah Island in 2012. Making him even more of a threat at Quail Hollow, he has finished out of the top 10 in only one of seven starts there and holds the course record of 11-under-par 61 and the tournament record of 21-under 267.
Advertisement
Advertisement

American Jordan Spieth celebrates a birdie on the 16th hole at the 146th Open Championship. File photo by Hugo Philpott/UPI
The 24-year-old Texan will be the big story in the PGA Championship at Quail Hollow as long as he remains in contention because he is trying to become the youngest player to complete the career Grand Slam. The second-ranked Spieth, who also is No. 2 behind Hideki Matsuyama in the FedExCup point standings, cooled off a bit last week with a tie for 13th in the WGC-Bridgestone Invitational after winning the Travelers Championship and the Open Championship at Royal Birkdale, the latter his third major title. He has three victories this season, also winning the AT&T Pebble Beach Pro-Am, and has eight top-10 results and 13 in the top 25 on the PGA Tour. Spieth, who won the Masters and U.S. Open at Chambers Bay in 2015, is making his fifth start in the PGA, with his best result a solo second three shots behind Jason Day at Whistling Straits that same year. He tied for 32nd in his only appearance at Quail Hollow in the 2013 Wells Fargo Championship.
Advertisement

American Dustin Johnson hits out of the rough on the fifth on the fourth hole on Day two at the 146th Open Championship. File photo by Hugo Philpott/UPI
The top-ranked player in the world seems to be regaining his form following a back injury, which he sustained the day before the Masters, as he heads to the PGA Championship. He tied for eighth in the RBC Canadian Open and tied for 17th in his title defense in the WGC-Bridgestone Invitational last week, with a 75 in the second round at Firestone the only time he failed to break 70 in his last eight rounds. DJ, who is third in the FedExCup standings, won three times earlier in the season, in addition to tying for second in the Wells Fargo Championship and finishing third at Pebble Beach. He claimed his only major title last year in the U.S. Open at Oakmont and his best finish among five top-10 results in the PGA was a tie for fifth in 2010 at Whistling Straits, where he held a one-stroke lead on the final hole before taking a two-stroke penalty for grounding his club in a bunker.
Advertisement

Hideki Matsuyama of Japan chips to No. 18 during the final round of the 117th U.S. Open. File photo by Brian Kersey/UPI
About all that remains to round out Matsuyama's career resume is a major championship. His five-stroke victory last week in the WGC-Bridgestone Invitational at Firestone was his second in the World Golf Championships, giving him seven victories around the world since the beginning of 2016. It was his third victory of the season on the PGA Tour and he also has finished second three times, lifting him to the lead in the FedExCup point standings. Matsuyama's best finish in the majors was a tie for second two months ago in the U.S. Open at Erin Hills, four strokes behind Brooks Koepka, and his only top-10 result in the PGA Championship was a tie for fourth, four shots behind winner Jimmy Walker last year at Baltusrol. The third-ranked Matsuyama has played three times in the Wells Fargo Championship at Quail Hollow, with his highest finish a tie for 11th last year, and he also tied for 20th two years ago.
Advertisement

Rickie Fowler putts No. 1 for a birdie during the final round of the 117th U.S. Open. File photo by Brian Kersey/UPI
The flashy Fowler knows he has to win more, especially a major championship, to prove there also is plenty of substance to his game. His best finishes in the Grand Slam events were ties for second in the U.S. Open at Pinehurst No. 2 and the Open Championship at Royal Liverpool, both in 2014. In fact, he wound up in the top five in all four majors that season, also tying for fifth in the Masters and tying for third in the PGA Championship at Valhalla, his best finish in the fourth major of the year. He is No. 10 in the world after winning the Honda Classic, tying for second in the Memorial Tournament and tying for third in both the Wells Fargo Championship and the Shell Houston Open, putting him sixth in the FedExCup standings. Fowler has played well at Quail Hollow, winning in a playoff over Rory McIlroy and D.A. Points in 2012, tying for fourth last year and finishing sixth in 2010.
Advertisement

Brooks Koepka poses with the U.S. Open Trophy after the final round of the 117th U.S. Open. File photo by Brian Kersey/UPI
The U.S. Open champion has continued to play well since winning the second major of the season at Erin Hills, tying for sixth in the Open Championship at Royal Birkdale and tying for 17th in the WGC-Bridgestone Invitational at Firestone. Koepka has recorded six top-10 results and nine in the top 25 on the PGA Tour this season, including solo second in both the Shriners Hospitals for Children Open and the Valero Texas Open. Those results have put him 11th in the World Golf Rankings, seventh in the FedExCup standings and sixth in the Presidents Cup standings, so he seems certain to make the U.S. team for the matches later this year. Koepka has six top-10 results in the majors over the last four seasons and he tied for fifth in the PGA Championship in 2015 at Whistling Straits and tied for fourth last year at Baltusrol. He will be playing at Quail Hollow for the first time.
Advertisement

Paul Casey chips out of a greenside bunker on the 18th hole during round 3 of the 117th U.S. Open. File photo by Brian Kersey/UPI
Put Casey high on the list of best players not to win a major championship and he has nine results in the top 10 of the Grand Slam events in his career. After his career was short-circuited by injuries for several seasons, he is enjoying a strong season, having tied for fifth in the Travelers Championship, tied for 11th in the Open Championship at Royal Birkdale and tied for fifth in the WGC Bridgestone Invitational in his last three starts. Casey, who has climbed back to No. 18 in the world and is 21st in the FedExCup standings, has six results in the top 10 and 13 in the top 25 on the PGA Tour this season. Casey's best major finish was a tie for third in the 2010 Open Championship at St. Andrews, but surprisingly his best result in 14 starts in the PGA Championship was only a tie for 10th last year at Baltusrol. In three appearances at Quail Hollow, he missed the cut twice and tied for 41st in 2016.
Advertisement

Jon Rahm hits from fescue on the 10th hole during round 1 of the 117th U.S. Open. File photo by Kevin Dietsch/UPI
At No. 6 in the Official World Golf Rankings, Rahm is a cinch to be the PGA Tour's Rookie of the Year, and about all he hasn't done is make a run at his first major championship. He showed he's not afraid of the bright lights when he was low amateur in a tie for 23rd at the U.S. Open last year at Oakmont, but in four starts in the Grand Slam events since, his best finish was a tie for 27th in the Masters in April. Of course, this is the first season in which Rahm will play in all four majors and this is his PGA Championship debut. He won the Farmers Insurance Open in February, was second in both the WGC-Dell Technologies Match Play and the Dean & DeLuca Invitational, and tied for third in the WGC-Mexico Championship to rank fifth in the FedExCup point standings. He also captured the Irish Open and is third in the European Tour's Race to Dubai. Rahm is making his first start at Quail Hollow.
Advertisement

Jason Day watches his hit off the 13th tee during round 2 of the 117th U.S. Open. File photo by Kevin Dietsch/UPI
It's been a difficult season for Day -- No. 1 in the world at the end of last year -- because of injuries and his mother's battle with cancer. He has managed only two top-10 finishes on the PGA Tour this season, solo second in the AT&T Byron Nelson, and a tie for fifth in the AT&T Pebble Beach Pro-Am. However, Day can make up for it this week in the PGA Championship, which he won two years ago by three strokes at Whistling Straits over Jordan Spieth for his only major title. He was in the chase for a while last week in the WGC-Bridgestone Invitational before back spasms struck again and he played the weekend in 70-71 to tie for 24th after tying for 27th in the Open Championship at Royal Birkdale. The Aussie, who has slipped to No. 7 in the Official World Golf Rankings, is playing at Quail Hollow for the third time and he tied for ninth in 2012 after finishing in a tie for 22nd two years earlier.
Advertisement 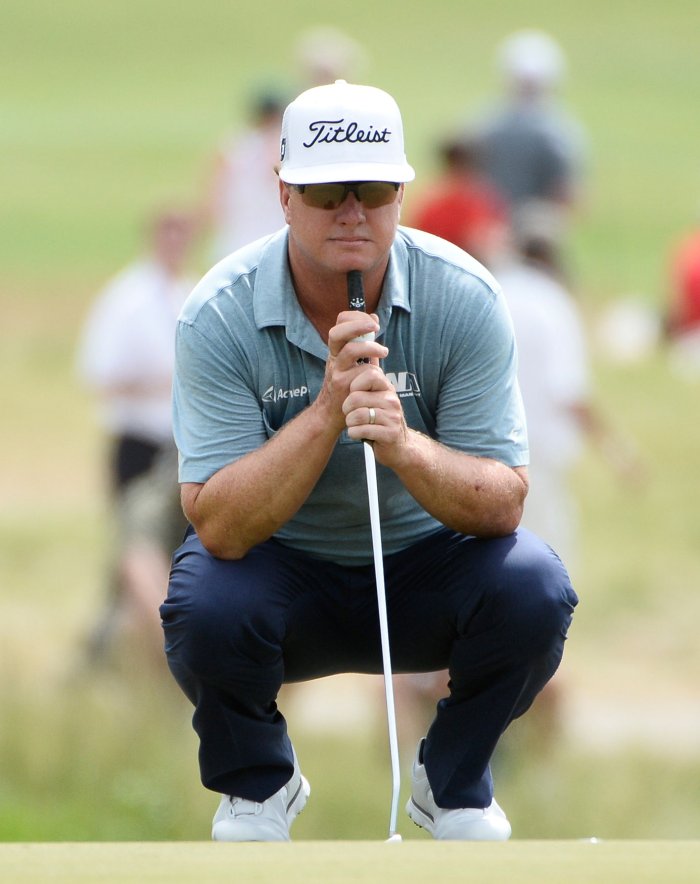 Charley Hoffman lines up his putt on the 8th hole during round 3 of the 117th U.S. Open. File photo by Brian Kersey/UPI
Even though he has not won since the 2016 Valero Texas Open, his fourth victory on the PGA Tour, Hoffman is playing some of the best golf of his career entering the PGA Championship. In his last three events, he tied for 20th in the Open Championship, finished solo second in the RBC Canadian Open and solo third in the WGC-Bridgestone Invitational. He has seven results in the top 10 on the PGA Tour this season to place 11th in the FedExCup standings and has risen 46 spots to No. 20 in the Official World Golf Rankings since the end of last year. Hoffman's best finish in a major championship was solo eighth in the U.S. Open two months ago at Erin Hills, and he has finished in the top 25 of all three majors this year, also tying for 22nd in the Masters. However, he has never finished in the top 10 in the PGA, with his best result a tie for 40th in 2013 at Oak Hill, but this could be his time.
Advertisement

2017 PGA Championship: Jordan Spieth tees it up for first crack at career Grand Slam PGA Championship moving to May in 2019 golf season to avoid NFL schedule This week in golf: who is playing, how to watch, full schedule