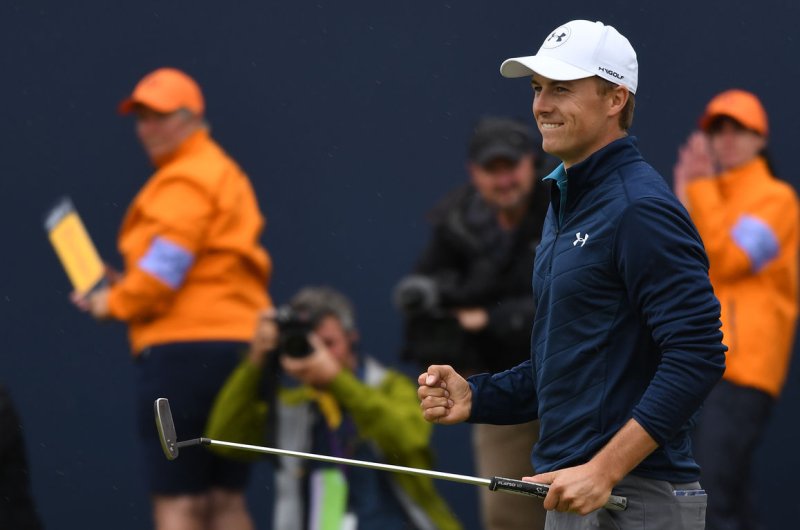 Jordan Spieth celebrated his 24th birthday during his week off after winning the 146th Open Championship at Royal Birkdale.

Spieth can give himself the best present of all this week by becoming the sixth player to complete the modern career Grand Slam with a win in the PGA Championship at Quail Hollow Club in Charlotte, N.C.

He would become the youngest to complete the career Slam and the first to finish it off in the PGA, but he is trying not to focus on that.

"I'm looking it like it's just another major and there are only four of them every year that we try to peak for, and that's enough to make it important," said Spieth, who claimed his first two major titles, the Masters and U.S. Open, back-to-back in 2015.

"I'm healthy and playing well, so I feel like I have a chance. If I (complete the career Slam) this year, fantastic, but if I don't, I might have 30 more chances to do it. I believe I will do it at some point, and it would be nice to happen now."

"To be in that company, no doubt, is absolutely incredible," Spieth told reporters Sunday about his excitement at the opportunity. "What those guys have done has transcended the sport. And in no way, shape or form do I think I'm anywhere near that, whatsoever. So it's a good start, but there is a long way to go."

Winning all four majors is so difficult that the likes of Arnold Palmer, Walter Hagen, Byron Nelson, Sam Snead, Tom Watson, Lee Trevino, Tommy Armour of Scotland and Raymond Floyd were not able to claim the elusive final leg of the Slam.

Interestingly, three players will have a chance to finish it off in the next three majors: Spieth this week, Rory McIlroy of Northern Ireland in the Masters next April and Phil Mickelson in the U.S. Open next June.

McIlroy has claimed four major titles, including the PGA twice, but hasn't won a Grand Slam event since the 2014 PGA at Valhalla. He is 0-for-3 while trying to wrap up the career Slam by winning the Masters.

"I think Jordan has a great chance to do it this week, and it would be huge for golf," said McIlroy, who has tied for ninth, tied for third and tied for seventh in the past three Masters. "Tiger did it at 24, too, and that's historic in itself.

"If Jordan is able to do it, it would be great for the sport as I said, and I texted him after he won the Open and told him that."

Mickelson has claimed 48 titles in his pro career and is a five-time major winner, but he is winless everywhere since he claimed a third leg of the Grand Slam by winning the Open Championship in 2014 at Muirfield. That was the one everyone felt would be the most difficult for him to win.

Lefty has finished second eight times in the U.S. Open, the only major he has failed to win, but hasn't come close in his three attempts to complete the career Slam, tying for 28th, tying for 64th and missing the cut.

This year, he skipped the tournament at Erin Hills because his daughter Amanda's high school graduation game on the same day as the first round. At the age of 47, his clock definitely is ticking.

"You look at Jack Nicklaus, he went through a stretch where he didn't win a major in three years," McIlroy said after tying for fourth at Royal Birkdale. "I'm not comparing myself to Jack. It's hard to win them. It's very hard. It's the reason especially in this generation, excluding Tiger, no one's got above five. So it's tough to win them.

"I feel like three years (without winning a major) has been too long. But at the same time I'm not going to rush it, I'm not going to be impatient. I'm going to play my game. And hopefully my chance arrives at some point and I'm able to take it."

McIlroy won four majors by the time he was 25 and probably felt a bit like Spieth does now, but the subsequent three years have taught him otherwise.

After winning his first two majors in 2015, Spieth tied for fourth in the Open Championship and finished second in the PGA to complete a brilliant season in the Grand Slam events.

It would be nice if he could win the PGA this week, before he learns that it's not all that easy, even for the great ones.