This week in golf: Who is playing, how to watch, updates 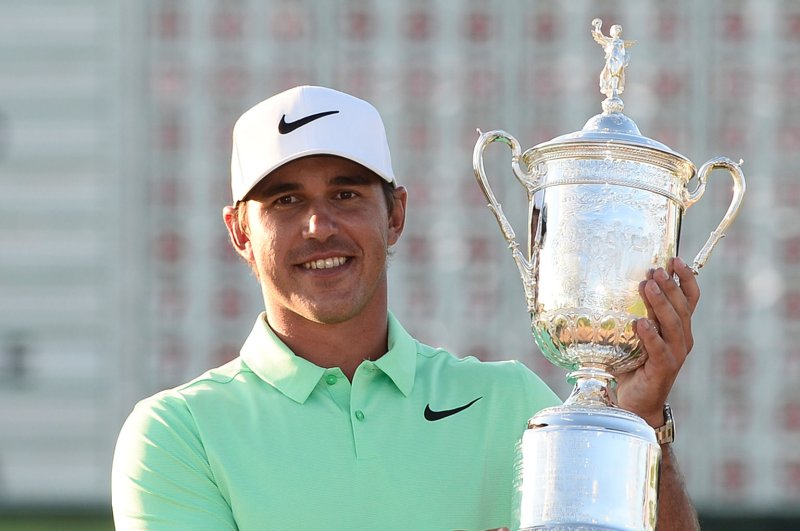 Brooks Koepka poses with the U.S. Open Trophy after the final round of the 117th U.S. Open golf tournament at Erin Hills golf course on June 18, 2017 in Erin, Wisconsin. Koepka shot a 16-under-par 272 to win the tournament by 4 strokes. Photo by Brian Kersey/UPI | License Photo

LAST YEAR: Russell Knox of Scotland came from three strokes behind in the final round and sank a 12-foot putt for par on the final hole to ensure his second PGA Tour victory by one stroke over Jerry Kelly. Knox, who also won the 2015 WGC-HSBC Champions in China, took the lead in the Travelers with birdies on the 13th and 14th holes, and after a bogey at No. 16, got up-and-down for par from a greenside bunker on the 18th hole. Kelly holed his second shot from 113 yards for an eagle on the 12th hole and closed with a 64 that included a 37-foot birdie putt that he left short on the last hole in an effort to force a playoff. Jim Furyk stole the show when he set a PGA Tour-record 12-under 58, including a hole-out eagle from 135 yards on the third hole.

LAST YEAR: Kirk Triplett collected his fifth title on the Champions Tour, shooting 7-under-par 65 to win by two strokes over Bart Bryant and Mike Goodes on a course softened by two inches of rain overnight. Triplett, who won three times on the PGA Tour, took charge by carding four straight birdies through No. 16 in the final round before sinking a clutch six-foot putt for par on the 17th hole and closing with a routine par. Bryant took a one-stroke lead with a birdie on the 14th hole, but hit a wild drive on the next hole and was unable to find his ball in the woods, taking a triple-bogey 7 on his way to a 69. Goodes closed with a 68 playing alongside Triplett.

RELATED 2017 U.S. Open Round 3: Brian Harman leads by one despite Justin Thomas' record 9-under round

LAST YEAR: Lydia Ko of New Zealand set a tournament record by shooting 9-under-par 62 in the second round before making birdies on four of the first five holes of the final round to take command on her way to a three-stroke victory over Candie Kung of Taiwan and Morgan Pressel. Ko, who collected her 13th LPGA Tour victory and has since added a 14th, could even afford two late bogeys to finish at 17-under 196 and break the tournament scoring record set a year earlier by Sei Young Kim of South Korea by two strokes. Kung had three birdies down the stretch in a closing 69, while Pressel, who had at least a share of the lead each of the first two days after starting with 65-63, shot 71 in the final round.