Fans watch as Jason Day putts on the 9th green during round 1 of the 117th U.S. Open golf tournament at Erin Hill golf course in Erin, Wisconsin on June 15, 2017. Photo by Kevin Dietsch/UPI | License Photo

ERIN, Wis. -- A 94-year-old Wisconsin man died of natural causes during Friday's second round of the U.S. Open at Erin Hills.

According to local authorities, rescue personnel and Washington County sheriff's deputies stationed at the tournament were dispatched to the grandstand at the No. 6 hole to attend to the unidentified man, who was reported to not be breathing and not have a pulse.

Rescue personnel arrived within three minutes of the call and began CPR. The man, who is from Wauwatosa, Wis., was transferred to an on-site ambulance, where he was pronounced dead.

Foul play is not suspected and the death appears to be of natural causes, authorities said. 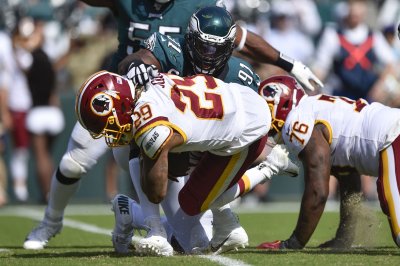