2017 Zurich Classic of New Orleans: 10 teams and players to watch, picks to win

The Zurich Classic of New Orleans is being contested by 80 two-man teams at stroke play, although there are elements usually associated with team match-play, as two rounds of foursomes (alternate shot) and fourball (best ball) will be played to determine the winners. This is the first team event for a PGA Tour regular-season event since 1982. Below are 10 teams to watch in New Orleans.

Justin Rose hits off the 12th tee during the 2017 Masters Tournament at Augusta National Golf Club in Augusta, Georgia on April 9, 2017. File photo by Kevin Dietsch/UPI
These Ryder Cup teammates and major champions finished 1-2 in the Olympics last summer in Rio de Janeiro, with the Englishman taking the gold medal. This is one of two teams in the tournament with both players in the top 10 of the Official World Golf Rankings, as Stenson is at No. 6 and Rose checks in at No. 8. Rose has a 12-7-1 overall team record in match play, including 4-2 alongside Stenson. Last year, they routed Jordan Spieth and Patrick Reed, 5 and 4, in fourball at Hazeltine, but also lost to the American pair in foursomes and another four-ball match. In 2014, the European pair won all three of their matches as Europe claimed the Cup at Gleneagles in Scotland. Stenson holds a 14-12-4 career mark in team match play and also is very good playing on his own in the format. He beat Geoff Ogilvy of Australia, 2 and 1, to win the 2007 WGC-World Match Play Championship and lost in the final to Mikko Ilonen of Finland, 3 and 1, in the final of the 2014 World Match Play.
RELATED Pro golfer tees off on United Airlines for club damage

Rickie Fowler hits off of the 18th tee during the third round of the 2017 Masters Tournament at Augusta National Golf Club in Augusta, Georgia on April 8, 2017. File photo by Kevin Dietsch/UPI
This is the other team in the Zurich Classic of New Orleans with both players in the top 10 of the World Rankings, with Day third and Fowler ninth. Day, however, has yet to play his best golf this season after sitting out the last three months of 2016 to rest a chronic back problem, and more recently dealing with his mother's battle with cancer. Day, the 2015 PGA champion, is very good on his own in match play with a 22-9 record, including victories in the WGC-Match Play in 2014 (beating Victor Dubuisson of France on the 23rd hole of the final) and 2016 (5 and 4 over Louis Oosthuizen of South Africa). However, he is only 3-6-3 with teammates for the International team in the last three Presidents Cups. Fowler also has not done well with teammates in the Ryder and Presidents Cups, with a 2-5-4 record, but they have the talent to be a powerhouse team if they can jell at TPC Louisiana.

Jordan Spieth hits off the fourth tee box during the fourth round of the 2017 Masters Tournament at Augusta National Golf Club in Augusta, Georgia on April 9, 2017. File photo by Kevin Dietsch/UPI
Spieth, a two-time major champion and No. 5 in the world, figures to set the tone for this pair because Palmer has never played in a team event as a professional and has a 1-4 record in singles during his two appearances at the WGC-Match Play Championships. Spieth, on the other hand, has a 9-3-2 record in team play in the Ryder and Presidents Cups. He is an exceptional putter, especially in the clutch, and simply has a knack for getting the ball into the hole, which is the name of the game in team play. Palmer's small sample of match play experience doesn't tell us much and although he is ranked 85th in the world he is a three-time winner on the PGA Tour and a seasoned 40-year-old veteran on the circuit who is coming off a tie for sixth last week in the Valero Texas Open and a tie for 11th in the RBC Heritage. He might be the perfect partner for Spieth, 23.
RELATED This week in golf: Who is playing, how to watch, updates

Branden Grace of South Africa lines up a putt on the 18th hole in the final round at the PGA Championship. File photo by John Angelillo/UPI
A rising star on the PGA Tour after winning 10 times on the European and Sunshine Tours, Grace carried the International team with a 5-0 record even though the United States pulled out the victory in the 2015 Presidents Cup at Jack Nicklaus Golf Club in Korea. His four doubles victories were alongside Oosthuizen, who captured the 2010 Open Championship at St. Andrews, and they weren't picky about the teams they beat. Grace and Oosthuizen defeated Bubba Watson and J.B. Holmes, Rickie Fowler and Patrick Reed, Dustin Johnson and Jordan Spieth, and Matt Kuchar and Reed. Thanks to the help from Grace, Oosthuizen has a 5-3 record in two appearances in the Presidents Cup, but also is very good in singles match play, with a 17-10 record and reach the final of the WGC-Match Play Championship last year before Jason Day beat him, 5 and 4.
RELATED 2017 Valero Texas Open: Kevin Chappell seizes one-shot lead in tough weather conditions

Bubba Watson looks at his putter at a practice round on Tuesday at the 2017 Masters Tournament. File photo by John Angelillo/UPI
If the Zurich Classic of New Orleans was a long-drive championship, this is the team that would be favored. However, Watson and Holmes also have some finesse to their games, which make them a formidable duo. Bubba, the two-time Masters champion, has a 7-7-1 team match-play record in Ryder and Presidents Cups, including 2-1-1 alongside Holmes in the 2015 Presidents Cup at Jack Nicklaus Golf Course in Korea. Included was an impressive 3-and-2 victory over Adam Scott of Australia and Hideki Matsuyama of Japan. Watson also went 3-1 in the team portion of the 2011 Presidents Cup at Royal Melbourne. Holmes was instrumental in the United States' victory in the 2008 Ryder Cup at Valhalla, posting a 2-0-1 record, including a 2-and-1 singles victory over Soren Hansen of Denmark. Watson has flown back from the Shenzhen International in China, where he led with a first-round 66, but slid to a tie for 26th with a closing 74. 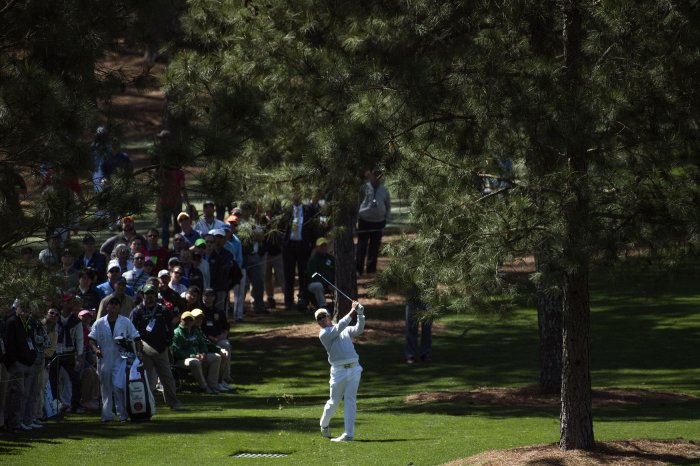 Hideki Matsuyama hits from the rough on the 7th fairway during the second round of the 2017 Masters Tournament. File photo by Kevin Dietsch/UPI
Even though Matsuyama is No. 4 in the world rankings, this is a team that might fly under the radar but certainly has the ability to win this week at TPC Louisiana. Matsuyama has won four times on the PGA Tour, including the Phoenix Open earlier this year, and Tanihara, 38, has won 14 times in Japan and in March reached the semifinals of the WGC-Dell Technologies Match Play before eventual champion Dustin Johnson edged him, 1 up. Included in that run was a 4-and-2 upset of Jordan Spieth in the first round, and Tanihara also has a 2-1-1 record in team match play in the 2009 Royal Trophy and the 2014 Eurasia Cup. Matsuyama has a 2-3-2 record in twosomes play at the 2013 and 2015 Presidents Cup, in addition to winning his first three matches in the 2015 WGC-Match Play at Harding Park in San Francisco. before losing to eventual champion Rory McIlroy of Northern Ireland in the Round of 16, 6 and 5.

Thomas Pieters walks to the 18th green in the final round of the 2017 Masters Tournament. File photo by John Angelillo/UPI
This is another team that won't get a lot of attention based on name reputation, but they are two of the best young players in the world. Pieters, 25, who has won three times on the European Tour and finished just off of the medal platform at fourth in the Olympic Games last summer in Rio de Janeiro, and was a star for Europe in the 2016 Ryder Cup at Hazeltine. He posted a 4-1 record, teaming with Rory McIlroy for victories over Dustin Johnson and Matt Kuchar, Rickie Fowler and Phil Mickelson, and Johnson and Brooks Koepka, before beating J.B. Holmes in singles, 3 and 2. Berger, 24, who claimed his first PGA Tour victory last year in the FedEx St. Jude Classic, hasn't yet made a Ryder Cup or United States team for the Presidents Cup, and has only a 1-5 record in two WGC-Match Play tournaments, but that one was an impressive 7-and-5 victory over J.B. Holmes last month. He was 0-3 in the 2016 tournament while playing despite a wrist injury.

Kevin Chappell tees off on the 7th hole in the first round at the 2017 Masters Tournament. File photo by John Angelillo/UPI
Coming off his first PGA Tour victory in the Valero Texas Open on Sunday, Chappell will try to avoid a letdown in what appears to be one of the sleeper teams in the Zurich Classic of New Orleans. Neither player has ever made a United States team for the Ryder Cup or the Presidents Cup, but two-time PGA Tour winner Woodland has posted a 7-5 record in four appearances in the WGC-Match Play, most of that damage coming in the 2015 event, when he rolled through Jimmy Walker, Ian Poulter, Webb Simpson, Marc Leishman, John Senden and Danny Willett before losing the final to Rory McIlroy, 4 and 2. Chappell, who earned his first victory in 180 starts on the PGA Tour after finishing second six times, got his first chance in the WGC-Match Play last month and beat Shane Lowry of Ireland, but lost to Masters champion Sergio Garcia and another Spaniard, rookie Jon Rahm.

Keegan Bradley hits out of a bunker on the 4th hole during a practice round before the 2016 Masters Tournament. File photo by Kevin Dietsch/UPI
While Bradley has shown some signs this season that the form that took him to the 2011 PGA Championship might be close to returning, he has played very well in team match play events and could form a strong team with Steele. Bradley has a 6-2-1 record in the Ryder and Presidents Cups, although it must be pointed out that he played alongside Phil Mickelson in all of those matches. Included was a 3-0 record with Lefty in the 2012 Ryder Cup and a 3-1 mark in the 2013 Presidents Cup. Perhaps he can play the mentor role in his pairing with Steele, who earned his second PGA Tour victory at the start of this season in the Safeway Classic. Steele got his first taste of match play as a pro last month in the WGC-Dell Technologies Match Play and acquitted himself well by beating Tommy Fleetwood and halving his match with Matt Kuchar before Zach Johnson won their group by beating him, 1 up.

Seung-Yul Noh hits a tee shot on the 5th hole during the final round of the Quicken Loans National at Congressional Golf Course. File photo by Molly Riley/UPI
The South Korean men golfers are playing big-time catch-up to the women, but Noh and An are helping them get closer. Noh has won four times as a pro, including the 2014 Zurich Classic of New Orleans, while An has three pro titles and has been knocking on the door on the U.S. tour, losing in a playoff to Brian Stuard at TPC Louisiana last year. Noh's match play as a pro has been limited to the 2011 Royal Trophy, where he posted a 2-0-1 record for Asia in a 9-7 loss to Europe, teaming with Liang Wen-Chong of China for victories over Colin Montgomerie and Johan Edfors in both foursome and four-ball in addition to routing Peter Hanson, 7 and 6, in singles. An had a 1-1 record in doubles play in the 2016 Eurasia Cup, but is only 1-5-2 in the WGC-Match play, beating Jason Dufner and halving matches with Rickie Fowler and Scott Piercy last year.