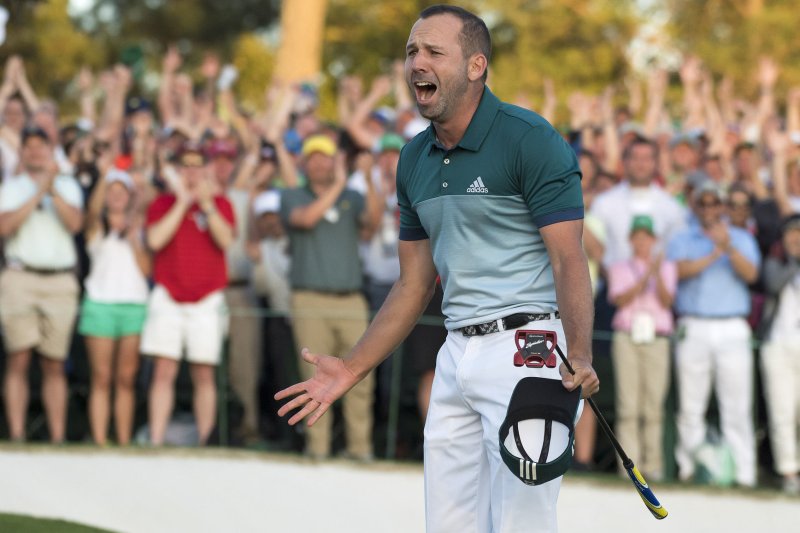 Sergio Garcia celebrates as he wins the 2017 Masters Tournament Sunday at Augusta National Golf Club in Augusta, Ga. Garcia beat out Justin Rose in a one hole playoff round. Photo by Kevin Dietsch/UPI. | License Photo

Patrons react while Sergio Garcia of Spain celebrates on the 18th green after winning the 2017 Masters Tournament Sunday at Augusta National Golf Club in Augusta, Ga. Garcia defeated Justin Rose of England in a one hole playoff to win his first major championship. Photo by John Angelillo/UPI. | License Photo

April 13 (UPI) -- Masters champion Sergio Garcia was once a "sore loser," according to Padraig Harrington.

Harrington spoke with Game On Tuesday in Ireland when he said that Garcia was a poor sport during the 2007 Open Championship.

"His [has] a very flamboyant game, everything comes easy. There were periods he never practiced," Harrington said on RTE 2fm. "I worked at it, grinded it out, got the best of it. I'm very strong with the etiquette of the game, so I don't tolerate people spitting in the hole, throwing their shoes or throwing golf clubs. That would be my attitude, and that would be quite clear from where I came from."

The duo battled during the 2007 Open Championship and 2008 PGA Championship, but Harrington won both titles. During the Open at Carnoustie, Garcia booted a par putt on the 72nd hole. Harrington went on to win the tournament after the blunder.

"I gave him every out I possibly could at the 2007 Open," Harrington said of Garcia on Game On. "I was as polite as I could, and as generous as I could be. But he was a very sore loser, and he continued to be a very sore loser. So clearly after that, we had a very sticky wicket I'd say. The Ryder Cup obviously improved it to no end. But look, we say hello to each other every day we meet, but it's with gritted teeth, there's no doubt about it."

Harrington added that he was "delighted" to see Garcia win the Masters, despite the shaky relationship.

"Because of where my head was at, sometimes, I did think, `Am I ever going to win one?' I've had so many good chances, and I've either lost them, or somebody did something to beat me," Garcia said after the Masters, according to the Golf Channel.

"So, it did cross my mind, but lately I've been getting some good help. I've been thinking a little differently, more positively, and I've been more accepting, that if for whatever reason it didn't happen, my life is still going to go on. It's not going to be a disaster."

Garcia won the 2017 Masters after defeating Justin Rose Sunday in a one-hole playoff. The Spaniard carded a birdie on the par-4 18th green, while Rose hit a bogey. The win gave Garcia his first major championship. He is now ranked No. 7 in the World Golf Rankings, while Harrington sits at No. 162.

RELATED Dirk Nowitzki returning in 2017, says he could play into 40s