Matt Kuchar reacts after his putt for par on the 11th hole in the first round of the Masters Tournament at Augusta National. File photo by Kevin Dietsch/UPI

Playing his best golf of the season, Kooch made three birdies and a hole in one at No. 17 on the back nine at the Masters on Sunday to wind up in a tie for fourth, his fourth top-10 finish at Augusta National in the last six years. He leads the PGA Tour with 68 results in the top 10 since 2010, but this was only his third in the 2016-17 season. Kuchar loves taking his family to Hilton Head Island and will be making his 13th start at Harbour Town, where he has finished in the top 10 on five occasions, including each of the last three years. He claimed his seventh, and last, PGA Tour title at the 2014 RBC Heritage, and did it in dramatic fashion. Kuchar closed with a 7-under-par 64, but hit his approach on the 18th hole into a greenside bunker, only to hole out for a birdie to beat Luke Donald by one stroke. He finished fifth in his title defense and tied for ninth last year.

Russell Henley watches his drive off of the 6th tee box during a practice round prior to the start of the 115th U.S. Open Championship. File photo by Kevin Dietsch/UPI

Coming off a tie for 11th in the Masters, his best-ever finish in a major championship, Henley will make his fourth appearance at Harbour Town, where he tied for sixth as a rookie in 2013 by playing the weekend in 67-69. After missing the cut in his next two starts at the RBC Heritage, he tied for 23rd last year but is playing his best golf this season since winning in his first two years on the PGA Tour. Henley, who lives not far from Hilton Head in Charleston, S.C., claimed his third victory on the circuit two weeks ago at the Shell Houston Open and ranks 11th in the FedExCup standings. And he is playing well at Southern venues, also having tied for ninth at the Valspar Championship in Florida, tying for 10th at the RSM Classic in Georgia and tying for 14th in the Sanderson Farms Championship in Mississippi.

Branden Grace of South Africa stands on the 18th green in the final round at the PGA Championship at Baltusrol Golf Club in Springfield, New Jersey. File photo by John Angelillo/UPI

Although he has struggled this season, Grace flashed some of his old form when he shot a solid 71-70 on the weekend to tie for 27th at the Masters and warm up for his title defense at the RBC Heritage. He took an instant liking to Harbour Town the first time he played it two years ago, touring the last three rounds in 67-66-69 to wind up in a tie for seventh. Last year, Grace opened with a 5-under-par 66 and bounced back from a 74 to play the weekend in 69-66 to claim his first victory on the PGA Tour by two strokes over Luke Donald of England and Russell Knox of Scotland. He took the lead with birdies on four of the first six holes, solidified his position with two more on the 12th and 13th holes and held on down the stretch. The 28-year-old Grace showed he is a winner long before that, claiming a combined total of 10 victories on the European and Sunshine tours.

Martin Kaymer hits off of the 12th tee box during the second round of the 2017 Masters Tournament at Augusta National Golf Club. File photo by Kevin Dietsch/UPI

Battling back after opening with a 6-over-par 78 at the Masters, Kaymer shot 68 in both the second and final rounds to finish in a tie for 16th, his fifth consecutive top-25 finish on the PGA Tour this season, including a tie for fourth at the Honda Classic. The last equaled his best result on the European Tour this season, a tie for fourth at the Abu Dhabi HSBC Championship. The two-time major champion has won 23 times in his pro career, but not since a brilliant 2014 season, when he captured the Players Championship, the U.S. Open and the PGA Grand Slam of Golf, so it's about time for him to get it going again. Kaymer is making only his third start at the RBC Heritage, and has yet to get a feel for Harbour Town Golf Links. He tied for 66th in 2013, when he was tied for 13th after starting 69-70 before playing the weekend in an ugly 76-78, and he tied for 23rd the following year, when he shot 4-under-par 67 in the second round.

Charley Hoffman hits from the patrons on the 17th hole during the third round of the 2017 Masters Tournament at Augusta National Golf Club. File photo by Kevin Dietsch/UPI

Despite closing with a 6-over-par 78, Hoffman played perhaps his best major championship golf for three rounds of the Masters, taking the lead with a 7-under-par 65 and staying in the hunt until he was undone by two double bogeys and five bogeys on Sunday to finish in a tie for 22nd. He recorded his sixth result in the top 25 this season on the PGA Tour, including a tie for second at the Arnold Palmer Invitational and a tie for third at the Genesis Open. Hoffman is making his eighth start at the RBC Heritage and has finished in the top 10 twice, including a tie for sixth in 2013, when he had 5-under-par 66s in the first and third rounds to take the lead into Sunday, before he finished with a 6-over-par 77. He also tied for eighth in 2012, when he shot 65 in the second round, and he held the lead again last year after opening with 68-68, but playing the weekend in 71-75 to slide to a tie for 14th.

Pat Perez hits a drive during the Northern Trust Open at the Riviera Country Club in the Pacific Palisades area of Los Angeles. File photo by David Silpa/UPI

Enjoying a comeback season on the PGA Tour at the age of 41 following shoulder surgery, Perez played the first two days of a cold and windy Masters in 74-74 before rallying on the weekend for 70-71 to wind up in a respectable tie for 18th. It was his eighth result in the top 25 on the PGA Tour during the 2016-17 season, including his second victory on the circuit at the OHL Classic at Mayakoba. He also tied for third at the SBS Tournament of Champions, tied for fourth in the Farmers Insurance Open and tied for seventh in the Shriners Hospitals for Children Open to rank seventh in the FedExCup standings. Perez will make his 11th start at the RBC Heritage, and his only top-10 finish in the event was a tie for sixth in 2011, when he played the middle rounds in 67-68, but he does have four other finishes in the top 30 at Harbour Town Golf Links.

In his first Masters and second major championship last week, Hadwin battled through the difficult conditions of the first two days in 75-74 -- 149 to make the cut by two strokes, and after struggling to another 75 in round three, he finished with a 2-under-par 70 to tie for 35th. Not all that bad for a first-timer at Augusta. Hadwin has been one of the surprises of the PGA Tour this season, posting his first victory on the circuit last month at the Valspar Championship, followed by a sixth-place finish the following week at the Arnold Palmer Invitational, in addition to finishing second to Hudson Swafford at the CareerBuilder Challenge and tying for 10th at the OHL Classic at Mayakoba. Hadwin has three other results in the top 30 and ranks fifth in the FedExCup standings. He will make his third start at the RBC Heritage this week, having shot 75-69 -- 144 to miss the cut by two strokes in 2015, before finishing in a tie for 30th last year by closing with a 4-under-par 67.

Brandt Snedeker reacts after making a putt in the first round at the PGA Championship at Baltusrol Golf Club in Springfield, New Jersey. File photo by John Angelillo/UPI
Advertisement

Sneds was in position for a second straight top-10 finish at the Masters after shooting 3-under-par 69 in round three, but he could manage only a 73 on Sunday and slipped to a tie for 27th. Still, it was the seventh time in his last nine outings this season in which he finished in the top 30, including solo fourth at the AT&T Pebble Beach Pro-Am and a tie for seventh at the WGC-Mexico Championship. Snedeker is making his 12th start at the RBC Heritage and he closed with a 7-under-par 64 in 2011 to catch Luke Donald of England, then beat him with a par on the third playoff hole. He pulled off the RBC double two years later when he captured the RBC Canadian Open by three shots over Dustin Johnson, Matt Kuchar, Jason Bohn and William McGirt. Snedeker's second-best result at Harbour Town was a tie for 16th in 2007. 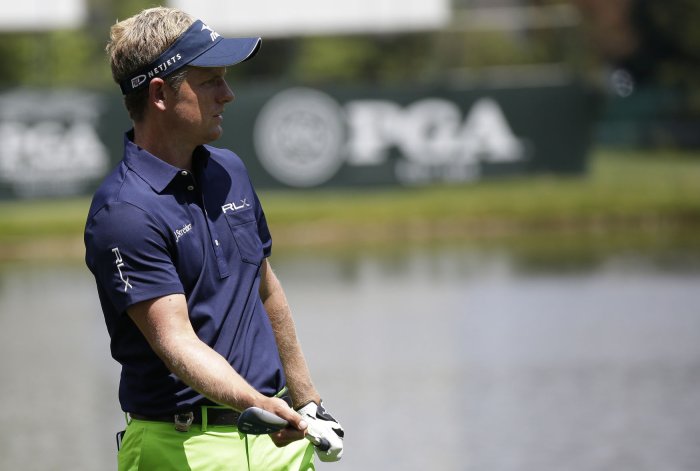 Luke Donald hits a pitch shot to a green in a practice round at the PGA Championship at Baltusrol Golf Club in Springfield, New Jersey. File photo by John Angelillo/UPI
Advertisement

The former top-ranked player in the world is down to No. 96 and has not won anywhere around the globe since 2013, but if there is any course that bring out the best in his game it's Harbour Town Golf Links. Donald will make his 12th appearance at the RBC Heritage this week and he has finished second in the tournament four times and third twice. His latest runner-up finish was last year, when he took the lead into the final round and closed with an even-par 71, with Branden Grace roaring past him to win with a 66. Donald also held the lead with 67-65-70 in 2011, but finished with another 70 and Brandt Snedeker beat him with a par on the third playoff hole. He finished with a 69 in 2014, but Matt Kuchar holed a bunker shot on the last hole to beat him by one stroke, and he closed with a 65-66 in 2009 and finished second again, but was 10 strokes behind Briny Baird. His best result this year was a tie for 17th at the Genesis Open.

Seemingly on the rise after claiming PGA Tour victories in each of the last two years, including the 2015 WGC-HSBC Champions in China, Knox picked up right where he left off when he opened the new season with three straight finishes in the top 10, including third at the OHL Classic at Mayakoba. However, he has struggled since, with a tie for 11th at the Sony Open his best result and his missed cut at the Masters was his fourth in his last six tournaments. Perhaps getting back to Harbour Town Golf Links will revive his game, as the Scot has finished no worse than a tie for 18th two years ago in his three previous appearances at the RBC Heritage. He also tied for ninth in 2014, and last year he almost walked away with the trophy, closing with a 4-under-par 67 after shooting 65 in round two, but wound up two shots short in a tie for second behind Branden Grace of South Africa, who won with a 66.