World No. 1 Dustin Johnson withdraws from 2017 Masters due to lower back injury

Dustin Johnson is seen on the practice range prior to his first round at the 2017 Masters Tournament at Augusta National Golf Club in Augusta, Georgia on April 6, 2017. Johnson pulled out of the Masters after injuring his back. Photo by Kevin Dietsch/UPI | License Photo

Dustin Johnson is seen on the practice range prior to his first round at the 2017 Masters Tournament at Augusta National Golf Club in Augusta, Georgia on April 6, 2017. Johnson pulled out of the Masters after injuring his back. Photo by Kevin Dietsch/UPI | License Photo

Dustin Johnson talks to his coach Bill Hartman prior to his first round at the 2017 Masters Tournament at Augusta National Golf Club in Augusta, Georgia on April 6, 2017. Johnson pulled out of the Masters after injuring his back. Photo by Kevin Dietsch/UPI | License Photo

World No. 1 Dustin Johnson was forced to withdraw from the Masters on Thursday after he sustained a lower back injury on Wednesday, eliminating one of the event's top storylines even before the first round was complete.

Johnson said he suffered a fall down a short flight of stairs on Wednesday afternoon at the home in which he was staying in Augusta, Ga., the site of the famed tournament that's the first of golf's four major events each season.

He had just returned to the house after a practice session at Augusta National and a trip to the gym and was headed outside wearing socks, but no shoes, to move his car when he slipped and landed on his elbow and lower back.

Johnson said he did everything he could to get ready to play but just couldn't swing a club more than 70 percent; even then, he still had pain.

"Last night, it was ice, heat, ice -- I was up pretty much all night trying to get it ready for today," Johnson said. "I had it worked on all morning. Obviously, I can make some swings. But I can't make my normal swing."

Johnson arrived at Augusta National Golf Club about two hours in advance of his tee time on Thursday afternoon and tried to warm up enough to play, He took some half and three-quarter swings on the extensive practice range and then headed back inside the clubhouse to receive additional treatment.

He returned to the range for a few swings of his longer irons and driver and even headed toward the first tee, where he was scheduled to play with former two-time Masters champion Bubba Watson and reigning PGA titleholder Jimmy Walker.

"It didn't hurt on the backswing, it was through impact -- I just felt like I couldn't compete," Johnson told ESPN in a televised interview. "My heart was in it. I want to play. The more I thought about it the more I thought I wasn't going to have any chance."

For Johnson, who had won his past three tournaments and seven of the past 17 events he has played in since winning the U.S. Open last June, the decision was difficult to make.

"It's unbelievably difficult -- this is one of my favorite tournaments and I feel like I'm playing the best golf of my career right now," Johnson said. "It sucks, really bad. I wanted to play but I couldn't compete like this.

"The worst part about it is that I feel like in two days I'm going to be fine, but right this second I can't swing." 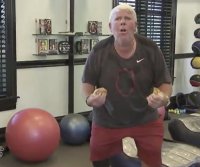