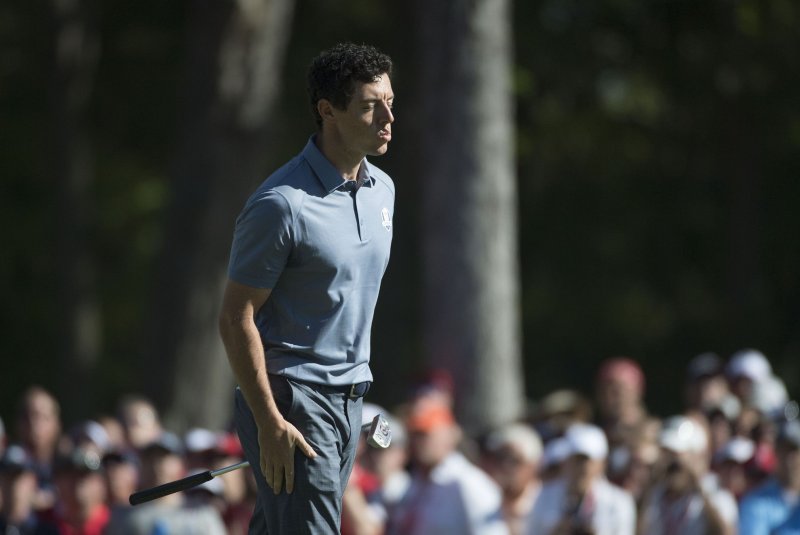 Rory McIlroy was knocked out of the World Golf Championships Match Play on Thursday after Gary Woodland pulled out of the event at windy Austin Country Club before their match because of a family emergency. File Photo by Kevin Dietsch/UPI | License Photo

No. 33 Gary Woodland pulled out of the event at windy Austin Country Club before his match with world No. 2 McIlroy because of a family emergency, giving a default win to the Northern Irishman. Meanwhile, No. 62 Soren Kjeldsen of Sweden, who beat McIlroy on Wednesday, posted a 4-and-3 win over Argentina's Emiliano Grillo on Thursday.

With Kjeldsen due to receive a walkover win over Woodland on Friday, he advances to the second round with the other three players in the group eliminated.

A similar situation will send No. 8 Alex Noren of Sweden to single-elimination play on the weekend. Noren beat No. 36 Bernd Wiesberger of Austria 3 and 2, and with No. 25 Francesco Molinari of Italy pulling out of the tournament following a 5-and-3 defeat to No. 57 Thongchai Jaidee of Thailand, Noren is through to the next round. Noren was due to play Molinari on Friday.

One-sided wins early in the day for world No. 1 Dustin Johnson, Bubba Watson and Brooks Koepka during the second round of pool play kept them undefeated and in a prime position to advance.

World No. 3 Jason Day of Australia, the defending champion, withdrew on Wednesday to be at his mother's bedside during her cancer surgery on Friday. That allowed No. 43 Lee Westwood of England a walkover victory in the second round.

Johnson dispatched 41st-ranked Martin Kaymer of Germany, 3 and 2, taking charge with a 20-foot birdie putt on the par-3 seventh hole before finishing off Kaymer with another birdie on the par-5 16th.

Johnson played in the middle of the day and even, then he had his fair share of battles with the wind including on the 440-yard par-4 15th, which was playing straight downwind. Johnson hit his drive 380 yards (86 yards farther than Kaymer) and was left with a 60-yard chip shot. He promptly knocked it 15 yards over the green.

"I had a pretty easy shot but I hit it just a fraction too hard, just straight downwind," Johnson said. "And I end up losing the hole. Yeah, it was windy. You weren't really hitting full shots. It was very tough out here today. You even had to play the wind on putts."

The 13th-seeded Watson roared past No. 39 Scott Piercy, 4 and 3. Watson birdied the first two holes to take an early lead and added birdies on the par-3 seventh and the long, uphill par-4 eighth to make the turn at 3-up. He added a birdie on the par-5 12th and closed out the match with birdie on the par-4 15th.

Through the first two rounds, 14 of the 64 players have won both their matches.

Hometown favorite and world No. 5 Jordan Spieth bounced back from a horrid first round of pool play to beat No. 37 Yuta Ikeda of Japan, 4 and 2, in one of the final matches of the day.

"I air mailed four or five greens today, and that's a stat that I'm probably as proud of as any, the fact that I do not hit the ball above the hole very often and do not fly greens very often," Spieth said. "It was a matter of trying to keep the ball below the hole and recognizing that even par is most likely going to win the majority of matches today. I was somewhere around there."