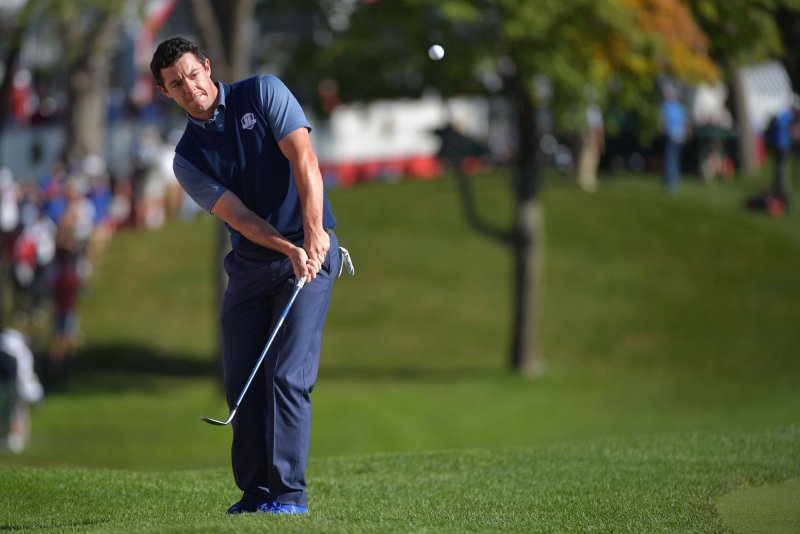 Rory McIlroy matched the low round of the day, carding a 6-under 65 on Friday to surge to a two-shot lead after two rounds of the World Golf Championships-Mexico Championship in Mexico City. File Photo by Kevin Dietsch/UPI | License Photo

March 4 (UPI) -- Rory McIlroy matched the low round of the day, carding a 6-under 65 on Friday to surge to a two-shot lead after two rounds of the World Golf Championships-Mexico Championship in Mexico City.

Playing in his first tournament since mid-January after being sidelined with a rib injury, McIlroy recorded an eagle for the second straight day to go with six birdies in moving to 9-under 133 through 36 holes.

Phil Mickelson, among six players to share the lead after the first round, followed up his opening 67 with a 3-under 68 and was in a three-way tie for second place with Ross Fisher (68) and Justin Thomas (66) at 135.

American Dustin Johnson was among three players at 6-under 136 after firing a 66. He was joined by Daniel Berger (66) and Great Britain's Andy Sullivan, who also shot a 65.

McIlroy offset a pair of bogeys on the back nine by sandwiching a pair of birdies around his eagle at the par-4 No. 14, where he holed out from 151 yards.

"Look, I'm in a great position," said McIlroy, "but I felt like I could have been a few more ahead."

McIlroy is bidding to join Tiger Woods (18), Johnson (3) and Geoff Ogilvy (3) as the only players with three or more wins in World Golf Championships events.

Mickelson, 46, the oldest player in the field, birdied two of his final four holes as he attempts to halt a victory drought dating to the Open Championship in 2013.

Thomas is seeking his fourth victory of the 2016-17 season while world No. 1 Johnson is making his first start since winning the Genesis Open at Riviera two weeks ago.