By Mike Tulumello, The Sports Xchange
1/3 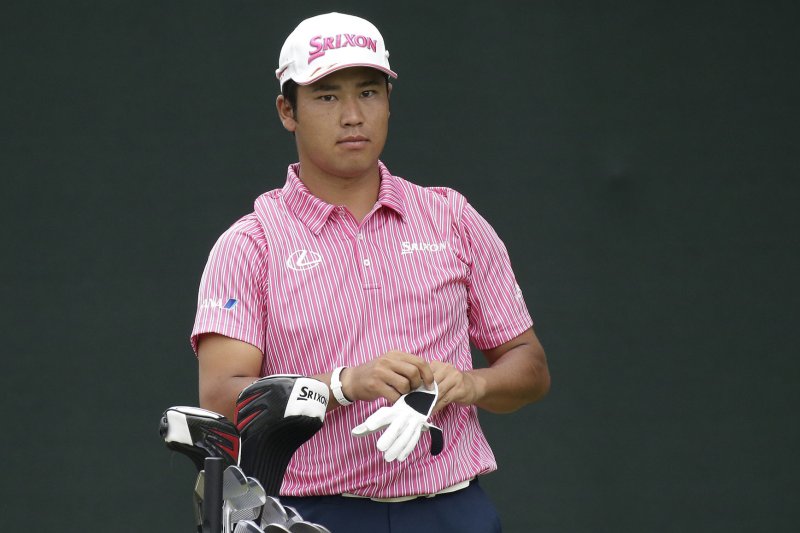 SCOTTSDALE, Ariz. -- Byeoen Hun An opened the door, and Hideki Matsuyama walked through.

Matsuyama came from four strokes back Sunday to edge Webb Simpson in a playoff and win his second straight Phoenix Open.

Matsuyama sunk a 12-foot birdie on the short par 4 17th hole, the fourth playoff hole, to win. He did so after Simpson's 20-foot birdie putt to win on No. 10, the third playoff hole, stopped a roll short. He also was short on a putt at 18 on the first playoff hole.

Matsuyama, who has won five events in the past 3 1/2 months to climb to No. 5 in the world rankings, now takes over the lead in the FedExCup standings over Justin Thomas.

"It's been a great run," Matsuyama said through an interpreter. "I'm going to ride this as long as I can."

Matsuyama shot 66 while Simpson shot 64, including birdies at 17 and 18, in regulation.

"To shoot 7 under on Sunday...is a great feeling," Simpson said. "I wish I could have a couple of those putts (in the playoff) back and hit them a little harder."

The pair took advantage of the struggles of An, a 25-year-old Korean who was seeking his first PGA Tour win. An had hoped for a bogey-free round to protect his one-shot lead over Martin Laird heading into the final round. Instead, An put up five bogies and three birdies for a 73. He finished sixth at 14 under.

"Just didn't work out today...just had a poor finish."

"I still got to work on my game. A bit sloppy with drivers and irons and putting. But it's not like it's the last event of the year or the last event for the rest of my life.

"I just can't wait to come back next year. It will be great."

Matsuyama started at 12 under, four shots back of An, while Simpson started at 10 under, six shots behind An.

Louis Oosthuizen shot 65 and finished at 16-under, good for third place.

Rickie Fowler, who lost in a playoff to Matsuyama last year, shot a 65 to finish at 15 under for the tournament, tied for fourth with J.J. Spaun.

Fowler has played more rounds at the Phoenix Open than any other tournament; this is his ninth appearance at the TPC Scottsdale.

"We will keep knocking at the door," he said. "We will get this one at some point."

Martin Laird, who started Sunday one stroke behind An, never got going Sunday. He shot 73 and finished tied for seventh with Daniel Berger at 13 under.

Jordan Spieth shot 67 and finished 12 under, as did first-round leader Matt Kuchar, who shot 70.

Brooks Koepka, the winner in Phoenix two years ago, finished 7 under.

Phil Mickelson emerged briefly as a contender, shooting a 4-under 31 on the front nine, capped by a spectacular approach shot at No. 9. From 165 yards out, he put the ball within two feet for an easy birdie and 14 under on the scoreboard.

Then, he bogeyed No. 10 and 11, effectively derailing his chances.

He finished at even par 71 and 10 under for the tournament.

"The golf fans came out today," Simpson said. "The partiers came out Saturday."

In regulation, An had a two-stroke lead through 10 holes when he hit an approach shot in the water on the right side of the 11th green. He saved bogey with a 7-foot putt, while dropping to even par for the round -- 16 under for the tournament -- and putting a host of players in contention.

And when Matsuyama birdied the par 5 13th, the two were tied for the lead.

Oosthuizen and Simpson joined them by hitting birdie putts at the short par 4 17th.

Matsuyama briefly took the lead with an easy birdie at the par 5 15th to go 17 under. An was in position to tie him, but he missed a three-footer at 15 to stay at 16 under. He also missed a birdie putt at 16 and bogeyed the final two holes.

Simpson hit a great approach shot at 18 to set up an easy birdie to tie Matsuyama at 17 under.

Then Matsuyama chipped from 43 yards out to within nine feet at 17. But his birdie putt missed badly.

Then he hit a rocket off the tee at 18; the 357-yard drive carried to within 74 yards of the hole. But he could only get his approach to 19 feet from the pin.

His putt headed for the center of the cup, but was one roll short. He and Simpson headed for a playoff.

"I don't know how that stayed out," Matsuyama said of his barely short putt. "You can't be short on a putt like that."

NOTES: With four wins, Matsuyama has the most PGA Tour wins of any Japanese player...Simpson was seeking his fifth win...According to The Arizona Republic, a skybox at the raucous 16th hole costs $50,000 and includes 34 badges per day, food and an open bar...Jon Rahm, who finished fifth at this tournament as an amateur two years ago, senses the crowd at 16 has gotten more demanding: "They're starting to boo you if you miss a 20-foooter for birdie."