Even with Tiger Woods having gone home because of back spasms, there was plenty of star power to light up the third round of the Dubai Desert Classic on Saturday at Emirates Golf Club.

Sergio Garcia of Spain finished a 4-under-par 68 in near darkness to take a three-stroke lead over Henrik Stenson of Sweden and finish a long day after the second round was halted by high winds on Friday.

Garcia put the finishing touches on a second-round 67 before carding five birdies on the back nine in round three and had a 54-hole total of 16-under 200.

RELATED Byeong Hun An shoots 65, leads by one in Phoenix Open

"At the end it was very, very dark, I'll tell you that," said García, who has 11 victories on the European Tour, but none since the 2014 Commercial Bank Qatar Masters. "When we were walking on 17, I thought, well, it will probably be a little dark but not too bad. But it gets dark very, very quickly here.

"We couldn't really see much on the last three shots. I pretty much couldn't see the ball land and the last putt was a little bit of a feel and a little bit of the read that George (Coetzee) gave me (putting before him), and I'm very fortunate to be able to make it.

"I played nicely again and made some nice putts, so I'm very happy with where I am."

RELATED No. 13 Oregon Ducks use 3-point barrage to rout No. 5 Arizona Wildcats

Stenson, who claimed his first major title in the Open Championship last July at Royal Troon, finished his 67 with a birdie on the last hole as darkness closed in.

Ian Poulter of England birdied three of the last four holes to also shoot 67 and was five behind in a tie for third with Prom Meesawat of Thailand, who had a bogey-free 68.

American Peter Uihlein carded a 69 with birdies on the last two holes and was six down in a tie for fifth with Coetzee of South Africa, who wound up at 70. 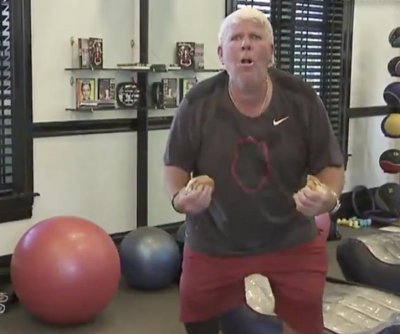