Tiger Woods, who has not played on the PGA Tour since August 2015, officially committed Friday to make his return to competitive golf next week in the Safeway Open.

Woods has been sidelined since finishing in a tie for 10th at the 2015 Wyndham Championship -- 417 days between official tournament rounds. The Safeway Open is the first tournament of the 2016-17 PGA Tour season and will be held at Silverado Resort and Spa in Napa, Calif.

Shortly after the Wyndham Championship in August 2015, the 40-year-old Woods underwent microdiscectomy surgery. He had a follow-up procedure in October 2015, his third surgery in 20 months.

Woods has 14 career Tour victories in California and finished tied for 30th in his lone previous start at the Safeway Open in 2011.

On Sept. 7, Woods wrote on his website that he hoped to play in the Safeway Open on Oct. 13-16, and add two more events before the end of the year. Woods said he also intends to play in the Turkish Airlines Open Nov. 3-6 in Antalya, Turkey, and the Hero World Challenge Dec. 1-4 at Albany in the Bahamas, a tournament that benefits the Tiger Woods Foundation.

Woods, the world's former No. 1 player and 14-time major winner, is now ranked 767th. He was 257th following the Wyndham. 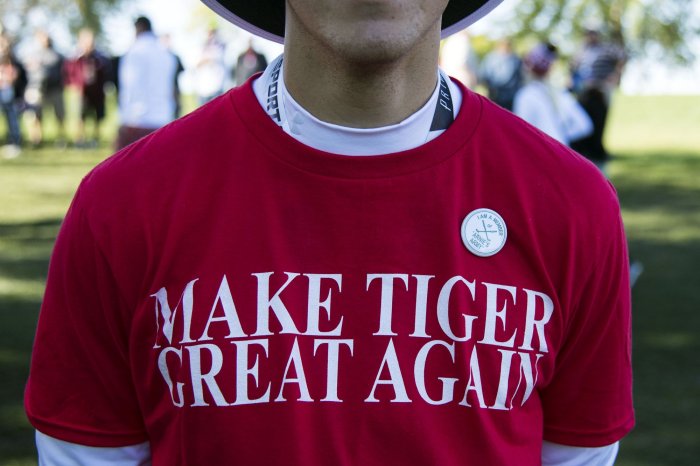 A golf fan wears a Donald Trump inspired shirt for Tiger Woods during day 2 of the 2016 Ryder Cup on October 1, 2016. Photo by Kevin Dietsch/UPI
"My rehabilitation is to the point where I'm comfortable making plans, but I still have work to do," Woods said in a statement on Sept. 7. "Whether I can play depends on my continued progress and recovery. My hope is to have my game ready to go.

"I'm looking forward to going to California for my foundation event and Safeway. I'm also excited to return to Turkey and Albany (in the Bahamas). It could be a fun fall. It was difficult missing tournaments that are important to me, but this time I was smart about my recovery and didn't rush it."