Rory McIlroy says he could "get away with" using HGH

Rory McIlroy, of Northern Ireland, is not pleased with his tee shot on the 16th hole during the Friday round of the U.S. Open golf championship at Oakmont Country Club near Pittsburgh, Pennsylvania on June 17, 2016. Photo by Pat Benic/UPI | License Photo

TROON, Scotland, July 12 (UPI) -- Four-time major champion Rory McIlroy is aiming at golf for not being strict enough with its policy against performance-enhancing drugs.

On Tuesday, McIlroy spoke to the media prior to the 145th Open Championship at Royal Troon.

McIlroy is currently ranked No. 4 in the World Golf rankings.

"I could use HGH and get away with it," McIlroy told Golf.com. "So I think blood testing is something that needs to happen in golf just to make sure that it is a clean sport going forward...If golf is in the Olympics and golf wants to be seen as a mainstream sport as such, it has to get in line with the other sports that test more rigorously."

The PGA Tour has a limited drug-testing program, but does not blood test its players. HGH is undetectable in urine.

McIlroy will also skip the Rio Summer Olympics. When explaining why he is snubbing the Olympics, McIlroy said he didn't get into golf to grow the game, but to "win championships."

McIlroy, of Northern Ireland, is one of the top 4 ranked golfers in the world to drop out of the Olympics. 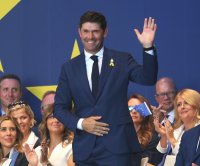