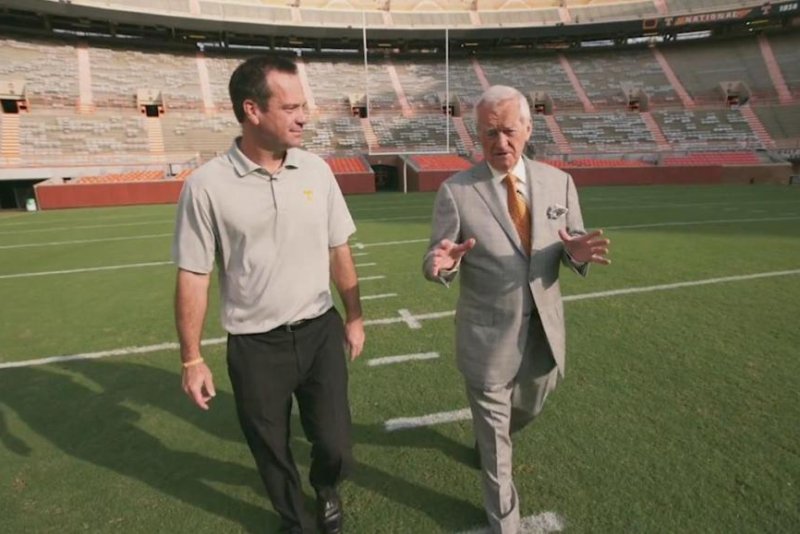 John Ward (R), known as the "Voice of the Vols" at the University of Tennessee, has died after a lengthy illness at the age of 88. Photo courtesy of Tennessee Vols Football/Twitter

John Ward, known as the "Voice of the Vols" at the University of Tennessee, has died after a lengthy illness at the age of 88.

Ward did radio play-by-play for 34 basketball seasons and 31 in football, never missing a game in more than 350 broadcasts before his retirement in 1999.

"It is with a heavy heart that we announce a great voice has gone silent," Vol Network said in a statement announcing his death.

During his last football season in 1998, the Volunteers won the national championship, and he continued for one more basketball season.

When the Volunteers beat Florida State in the Fiesta Bowl to clinch the national title, Ward punctuated the moment with the call: "The national champion is clad in Big Orange!"

Ward's broadcasts were sprinkled with his signature calls, which included, "Give him six," after a Tennessee touchdown, and, "Bottom," when the Volunteers made a big shot in basketball.

In 1994, Ward and his late wife, Barbara, gifted $2 million to Tennessee, at the time the largest ever made to the school's athletic department.

Ward was honored on the field during a game last season at Neyland Stadium.