A matchup between two of the winningest programs in college football history normally would be a marquee date on the schedule, but Saturday night's Ohio State-Nebraska game does not have that cache this season.

The ninth-ranked Buckeyes go into Lincoln, Neb., for the Big Ten matchup (7:30 p.m. ET on FS1) as prohibitive favorites over the Cornhuskers.

Ohio State (5-1, 3-0 Big Ten) has rattled off four consecutive victories after a loss at home to Oklahoma in the second week of the season. The Buckeyes won those three games in dominating fashion but, as coach Urban Meyer admits, against weaker opponents.

"They've been hitting on all cylinders for sure," Nebraska coach Mike Riley said. "Defensively, playing fast, and they're talented and they're well coached, and same thing offensively."

The same can't be said for Nebraska. Quarterback Tanner Lee has thrown a Big Ten-worst 10 interceptions, and the Cornhuskers (3-3, 2-1) have been just average on both sides of the ball, which is reflected in their .500 overall record.

Nebraska is coming off a 38-17 home loss to then-No. 9 Wisconsin in a game that was tied at 17 in the third quarter. One of Nebraska's nonconference losses, to Northern Illinois, was the first in school history to a Mid-American Conference team.

This week, the Cornhuskers face another Top 10 opponent. The last time Nebraska played Top 10 teams back to back was in 2008 when it lost to Missouri and Texas Tech while still a member of the Big 12.

The Cornhuskers faced the Buckeyes a year ago in Columbus, and it didn't go well for in a 62-3 loss.

"It was tough to watch," Lee said. "I mean, obviously, they will have the same talented team as they do, as they seem to have every year. They will be quick, athletic, and strong up front. So that will be a good challenge again for us this week."

Ohio State and Nebraska have met three times since the Cornhuskers joined the Big Ten, with the Buckeyes winning two. Their lone loss was in Lincoln in 2011, when they blew a 21-point lead in a 34-27 win for Nebraska.

The following year, Meyer took over as Ohio State's coach and the Buckeyes have proved almost impossible to beat on the road in Big Ten games since then. They're 21-1 away from home in conference player under Meyer.

A Nebraska win this year would be a significant upset, though the Cornhuskers are expected to put up a better fight that the Buckeyes' last four opponents.

"I think about the way they're playing right now, they're playing at a high level since that one loss and outscoring opponents," Riley said of Ohio State. "They're versatile and productive offensively in almost every category, near the top (nationally) in everything. Same thing defensively, so it's a major, major challenge for us."

Ohio State's offense, led by senior quarterback J.T. Barrett, is No. 1 in the Big Ten in total offense and scoring offense, and is second in rushing. The Buckeyes possess multiple weapons at running back (Mike Weber, J.K. Dobbins) and at wide receiver (Parris Campbell, Binjimen Victor, K.J. Hill).

The question mark on offense this week is up front. Right guard Branden Bowen suffered a season-ending injury last week in Ohio State's 62-14 win over Maryland. Matt Burrell finished the rest of that game, but Meyer said there's a three-way competition to win the starting job.

Since the defense was manhandled by Oklahoma, it has been on an upward trajectory. But linebacker Jerome Baker, who returned a fumble for a touchdown against Maryland, believes the Buckeyes are only scratching the surface of their potential.

Nebraska will have its hands full with Ohio State defensive end Nick Bosa (Big Ten-leading 10.5 tackles for loss) and company. The Buckeyes also welcome back defensive tackle Dre'Mont Jones after he missed two games with an injury, and safety Erick Smith is back on the depth chart after sitting out due to disciplinary action.

That means Ward will be available against Nebraska. But Meyer was not happy about the call.

"Concerned, irate, all of the above," he said. "It's not the person on the field. Those are snap judgments. I still to this day don't understand how that happens. That's for the higher-ups to figure out. 'Concerned' is probably not strong enough." 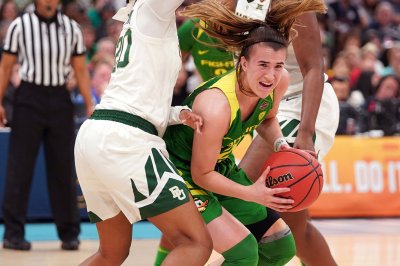