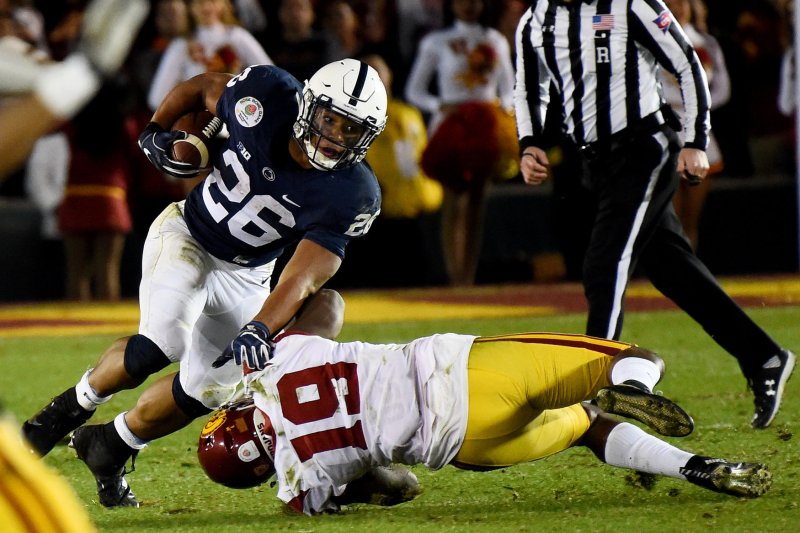 Penn State Nittany Lions running back Saquon Barkley (26) is stopped for no gain on third down by the Trojans' Michael Hutchings (19) in the fourth quarter during the 2017 Rose Bowl in Pasadena, California on January 2, 2017. File photo by Juan Ocampo/UPI | License Photo

The two gave college football fans a thrill at the Rose Bowl last season, with Darnold passing for 453 yards and five touchdowns in the Trojans' 52-49 victory over the Nittany Lions. Barkley rushed for 194 and had three scores in the contest.

Darnold was voted to the first team by a panel of 51 voters. He slipped past Heisman Trophy winner Lamar Jackson of Louisville, who is the second-team quarterback on the teams released Tuesday.

LSU's Derrius Guice joins Darnold and Barkley in the backfield on the first team. Guice served as the backup for the last two seasons to Leonard Fournette, who was selected with the fourth overall pick of the 2017 draft by the Jacksonville Jaguars.

The first-team defense is led by two players who were postseason All-Americans in 2016 in Houston defensive tackle Ed Oliver and Alabama defensive back Minkah Fitzpatrick.

Florida State's secondary was well represented with cornerback Tarvarus McFadden and safety Derwin James, who missed most of last year with a knee injury.

The ACC led all conferences with seven players on the first team, followed by the SEC (five) and the Big Ten (four) and Pac-12 (four).