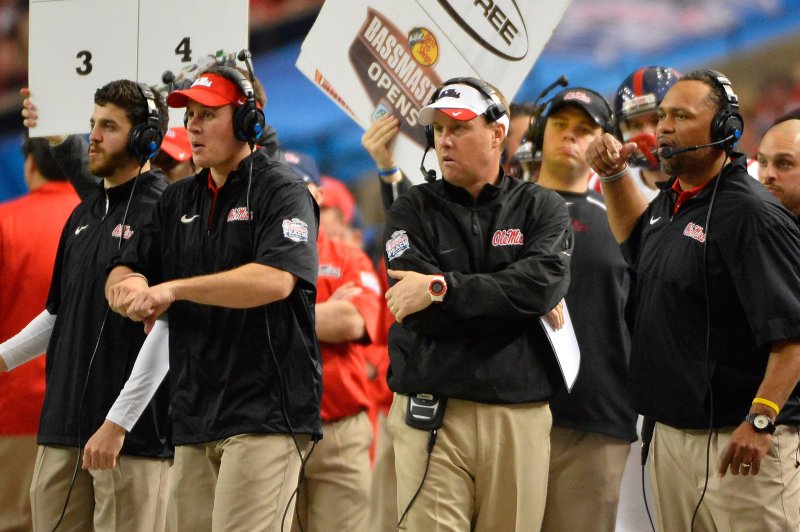 Former Mississippi head coach Hugh Freeze (C) calls in a play against TCU during the second half of their Chick-fil-A Peach Bowl game at the Georgia Dome on December 31, 2014, in Atlanta. Freeze is no longer the head coach of the Rebels following an incident linked to his phone and an escort service. File photo by David Tulis/UPI | License Photo

They've spent their offseason having to answer one question after another about the program, few of them pertaining to the upcoming season. Ole Miss has been college football's biggest storyline with various twists in its NCAA case that ultimately led to a sudden change in the program's leadership.

Players are ready to expend their energy physically rather than verbally.

That frustration has been building for a while.

The Rebels experienced their first losing season under Hugh Freeze last fall, a 5-7 record that was punctuated with a 55-20 home loss to Mississippi State. Freeze overhauled his staff as a result, bringing in five new assistants, including offensive coordinator Phil Longo and defensive coordinator Wesley McGriff, that players are still getting used to during camp. A sixth assistant -- offensive line coach Jack Bicknell Jr. -- was hired last month.

In February, players found out they have no chance at a bowl game this season as the school imposed a one-year postseason ban as part of its penalties stemming from the investigation, which has Ole Miss facing 21 charges of rules violations, including 15 Level I allegations, which the NCAA deems the most serious.

The most stunning development came last month when Freeze's five-year tenure ended with an abrupt resignation after it was discovered that a call placed from Freeze's university-issued cell phone to a number linked to an escort service led to a more thorough examination of Freeze's phone records. That revealed what athletic director Ross Bjork called a "concerning pattern" of personal misconduct.

"It was shocking," Patterson said.

But the players are moving on with the coaches that are still around. It starts with interim coach Matt Luke, a former Ole Miss player whose first head coaching job comes at his alma mater after serving two stints as an assistant with the Rebels.

MOST IMPORTANT PLAYER: QB Shea Patterson -- The defense needs to be better after bottoming out last season, but with much of the same personnel on that side of the ball returning, Ole Miss will go as their young quarterback goes. Patterson, a former five-star recruit, got some unexpected experience last season after having his redshirt burned once Chad Kelly suffered a season-ending knee injury, throwing for 880 yards and six touchdowns while adding 169 yards on the ground in the last three games. With an experienced offensive line and backfield, as well as another talented receiving corps to work with, the natural expectation is for Patterson to take another step in his development during a season in which the Rebels may once again have to outscore opponents to win.

BREAKOUT STAR: WR D.K. Metcalf -- Metcalf showed his potential on the outside last season as a true freshman with his only two catches going for touchdowns before a broken foot ended his debut season early. Pushing 6-foot-4 and 220 pounds, Metcalf already looks like an NFL receiver and possesses the physical tools to overwhelm smaller defensive backs. Metcalf, the son of former Ole Miss All-American and NFL offensive lineman Terrence Metcalf, could emerge as one of the SEC's top wideouts by season's end if he's able to stay healthy.

NEWCOMER TO WATCH: CB D.D. Bowie -- The highest-ranked signee in Ole Miss' latest recruiting class, Bowie was running with the second-team defense during the first couple of weeks of camp. Also a receiver in high school, Bowie already has the speed and range coaches covet at the position. Technique and consistency can improve like any true freshman, but Bowie is already showing advanced ball skills for a youngster. "When you put on the tape every day, at some point, that young man has gotten his hand on the football," defensive coordinator Wesley McGriff said.

LB Detric Bing-Dukes and CB Ken Webster are suspended for the Sept. 2 opener against South Alabama after being arrested earlier this month on shoplifting charges. Webster, who's coming off reconstructive knee surgery, and Bing-Dukes are projected starters.

CB Ken Webster, who's still being allowed to practice despite his arrest, has gotten an extensive look at safety during camp. There aren't many proven commodities at the position behind strong safety Zedrick Woods, with defensive coordinator Wesley McGriff saying he's currently taking a by-committee approach to the No. 2 safety spot.

RB Jordan Wilkins is eligible again and getting his first chance to be Ole Miss' primary back entering his senior season. An academic credits snafu cost Wilkins all of last season.

TE Octavious Cooley, a backup, has been suspended indefinitely for a violation of team rules. Interim head coach Matt Luke said he expects Cooley, the biggest tight end on the roster at 6-foot-3 and 257 pounds, back at some point.