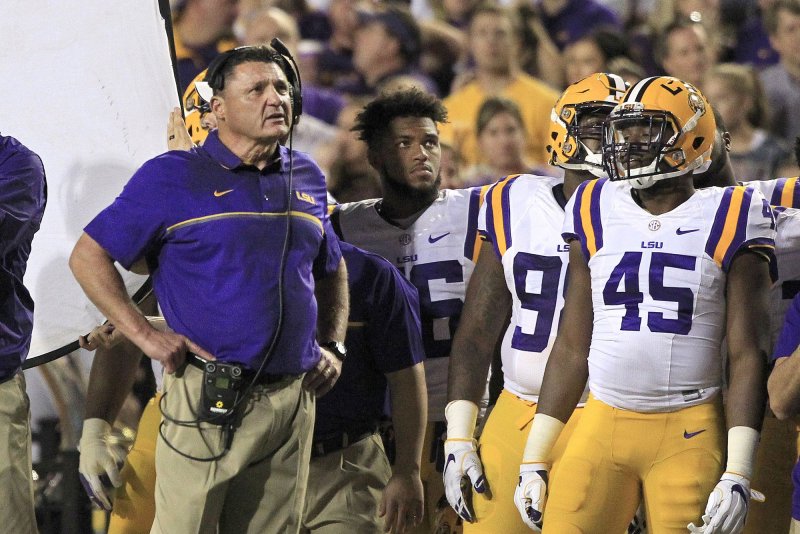 LSU will start a season with someone other than Les Miles as its head coach for the first time in 13 years.

Ed Orgeron, who was promoted to interim coach when Miles was fired after a 2-2 start last season, was named head coach in December after leading the Tigers to a 6-2 record, including a 29-9 victory against Louisville in the Buffalo Wild Wings Citrus Bowl.

LSU didn't land a big-name hire, such as Tom Herman, who flirted with the Tigers on his way to becoming head coach at Texas, but Orgeron as a Louisiana native was a mostly popular choice among players and fans, despite a failed stint as Ole Miss' head coach. He has a long, impressive resume as an assistant coach and recruiter, and his performance as interim head coach was well received, as was a similar stint at USC when he stepped in for Lane Kiffin in 2013.

Orgeron's first staff features former Pitt offensive coordinator Matt Canada, who was brought in to try to boost an offense that struggled for much of Miles' overall successful tenure, particularly in the final few seasons. LSU hopes that Canada will have a comparable impact to that which Dave Aranda had last season in his first year as defensive coordinator when LSU ranked 10th nationally in total defense. Convincing Aranda to stay was as big a priority, as was hiring Canada after Orgeron got the full-time gig.

The Tigers received a lift when Orgeron took over for Miles, but the challenge of running a program full time is different than the one that came with grabbing the steering wheel in late September with no guarantee of remaining on board beyond November.

Canada faces similar a question to those that faced his most immediate predecessors -- Cam Cameron and Greg Studrawa -- which is developing a playmaking quarterback who provides a consistent threat in the passing game to complement a traditionally rock-solid run game.

Senior Danny Etling, who was mostly efficient but a limited playmaker after replacing Brandon Harris during the second game of last season, held off challenges from a group of talented but untested youngsters early in preseason camp.

Etling, who appears recovered from back surgery after spring practice, is likely to be the starter when LSU opens the season against BYU on Sept. 2 in Houston, but freshman Myles Brennan was earning some first-team reps during the early stages of camp.

The Tigers once again are poised to have an outstanding running game with junior Derrius Guice running behind a solid offensive line, but the wide receiving corps features just one proven player -- D.J. Chark -- among a talented group.

Aranda has a talented group on defense, led by outside linebacker Arden Key, but LSU has to replace its top six tacklers. There's potential for another top-flight defense, but there could also be growing pains with so many untested players taking on starting roles.

"There are a lot of question marks that we have to answer, but we have the talent to answer them," Orgeron said.

BYU and Syracuse represent the only potential stumbling blocks among the non-conference opponents, but the SEC schedule features road games against Alabama, Tennessee and Florida, the last of which is the result of last year's meeting being moved from Gainesville to Baton Rouge because of Hurricane Matthew's threat to the Sunshine State.

Under Miles, the Tigers won the 2007 national championship and was undefeated and ranked No. 1 prior to its loss to Alabama in 2011 title game -- a result that started a gradual descent from national champion contender status.

Orgeron figures to have a brief honeymoon period before being expected to return LSU to where Miles had it during the pinnacle of his tenure as the second-winningest coach in school history.

"My goal is to build a championship program fast, very fast," Orgeron said. "I understand the expectations at LSU and I invite them."

MOST IMPORTANT PLAYER: RB Derrius Guice -- He burst out of Leonard Fournette's shadow for good last season, rushing for 1,387 yards and 15 touchdowns. His big-play ability as Fournette's backup, as well as Fournette's ankle injury that sidelined the future first-round draft choice of the Carolina Panthers, made Guice one of the most productive running backs in the SEC last season. With Fournette gone, Guice will be the featured back and just might put up numbers approaching those a healthy Fournette put up two years ago when he had 1,953 yards and 22 touchdowns.

BREAKOUT STAR: LB Devin White -- The sophomore stepped in for injured Kendell Beckwith late last season and demonstrated that he is on his way to being a defensive leader. He finished the season with 30 tackles in limited playing time. He forced a fumble and recovered a fumble in the regular-season finale victory against Texas A&M, and he made five tackles, including a sack of Heisman Trophy-winning quarterback Lamar Jackson for a 19-yard loss in LSU's bowl victory. His rare combination of size (6-foot-1, 250 pounds) and speed (roughly 4.5 seconds in the 40-yard dash) make him a strong candidate to be a primary playmaker in the Tigers defense this season.

QB Lindsey Scott Jr., a redshirt freshman, quit the team midway through preseason camp and planned to transfer. Scott was caught in a logjam among several young backup quarterbacks.

WR Justin Jefferson, a freshman, became academically eligible after the start of preseason camp. His presence means the Tigers will have a Jefferson brother on its roster for a 10th consecutive season. Jordan Jefferson was a quarterback at LSU from 2008-11 and Rickey Jefferson was a safety with the Tigers from 2012-16. "That was a big signing for us," coach Ed Orgeron said.

TE Aaron Moffitt signed as a defensive end but has been moved to offense. Moffitt is a son of LSU strength and conditioning coach Tommy Moffitt. "He's tough," coach Ed Orgeron said. "We originally thought that he could play defensive end or fullback for us. That's why he was originally recruited here. We're very deep on the defensive line. We're very thin on offense so we wanted to get some blockers over there and maybe he could help us over there."

TE J.D. Moore has moved to tight end, although he might still see action at his former fullback position. Last season he caught 10 passes for 58 yards.

DL Breiden Fehoko will sit out this season after transferring from Texas Tech. He has two years of eligibility remaining. "Fehoko would play for us this year if he was eligible," coach Ed Orgeron said. "He is beyond our high expectations."