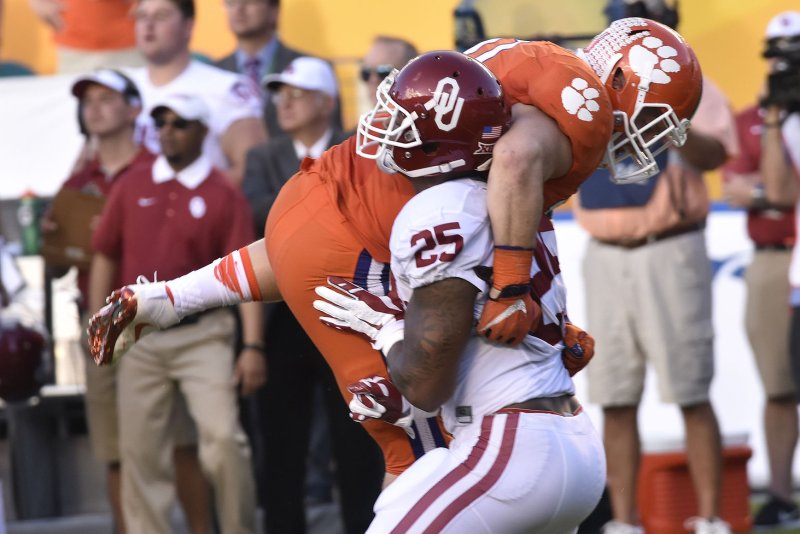 Running back Joe Mixon is leaving Oklahoma after two seasons on the field to enter the NFL draft.

Mixon announced Thursday that he's turning pro. He ended his college career in the Sugar Bowl with 91 yards rushing on 19 carries and five receptions for 89 yards in the Sooners' 35-19 win over Auburn.

The third-year sophomore's tumultuous term in Norman ended in controversy after video surfaced last month that showed him hitting a woman more than two years ago that led to his suspension for the 2014 season. Amelia Molitor's jaw was broken as well as an eye socket and cheekbone in the incident.

After Mixon said he received a first-round grade from NFL personnel, he decided to leave college. He informed Oklahoma coaches of his decision on Thursday morning in Norman and spoke with head coach Bob Stoops, who was out of town, by phone.

"I told him I had prayed with my family, and we came up that the best decision was to enter the draft," Mixon said. "I just thanked him for everything he did with me, giving me a second chance, sticking by me, never giving up on me."

Mixon was named All-Big 12 in 2016 after finishing second in FBS in all-purpose yardage. He rushed for 1,274 yards and 10 touchdowns on 187 carries and caught 37 passes for 538 yards and five scores this season. That brought his career totals to 2,027 yards rushing and 17 touchdowns on 300 attempts and 65 receptions for 894 yards and nine touchdowns.

As far as his NFL draft prospects, he is not listed among the top players at the position. But Mixon said Stoops thinks he'll succeed at the next level.

"He said, 'Just keep being the person you are -- you're a great person. Keep your head straight,'" Mixon said. "Basically, that I'll have a great career in the NFL."