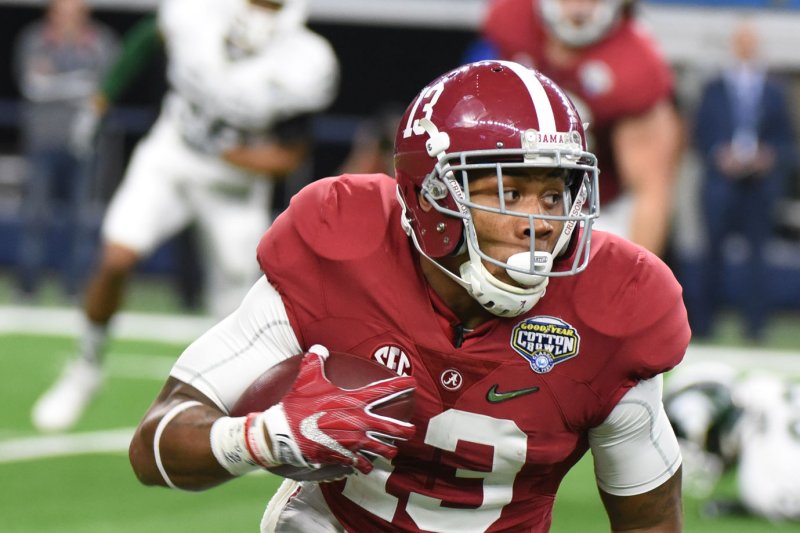 If it seems as if No. 1 Alabama is taking on a Top 25 opponent every week, that is because it keeps occurring.

The Tide had little trouble in disposing of then-No. 16 Arkansas 49-30 and No. 9 Tennessee 49-10 its past two games, but the Aggies may present more problems than either of those opponents.

"They are highly ranked in a lot of categories, whether it's turnover ratio, scoring defense or their ability to run the ball," said Alabama coach Nick Saban, noting the Aggies' No. 12, No. 22, and No. 7 rankings in those categories, respectively. "They have a very high-powered, balanced offense."

RELATED Why Alabama, Ohio State, Clemson, other undefeated teams might not stay perfect

Indeed, though Aggies quarterback Trevor Knight does not throw for a high completion rate (just 53.4 percent), he still averages 250 yards a game passing. That is complemented by Texas A&M's ability to rush the football. The Aggies are averaging over 274 yards a game on the ground with running back Trayveon Williams averaging just over 117 yards a game and Knight adding nearly 84.

Knight has a team-high nine rushing touchdowns to match his total of touchdown passes.

Then there is the A&M defense that is allowing more than 437 yards a game in total offense but still is holding opponents to fewer than 20 points a game. Some of that is due to the Aggies' ability to force turnovers. The Aggies have seven interceptions and 10 fumble recoveries for a turnover margin of plus-6 -- or plus-1 per game.

RELATED Ole Miss vs LSU preview: No. 23 Rebels set for clash with No. 25 Tigers

"They really have some dominating players on defense in Myles Garrett and Daeshon Hall, the two defense ends that create a lot of problems in terms of being great edge rushers," Saban said. "They've been really opportunistic on defense in terms of getting turnovers.

"So, there are a lot of important things for us to do well in the game, and it's going to take all phases doing well to have a chance to be successful."

Garrett, who missed the win over South Carolina due to a leg injury sustained in a 45-24 win over Arkansas, has four sacks and six quarterback hurries in five games. Hall, his counterpart on the other end, has 3.5 sacks and 10 hurries.

"A year ago I said best thing that happened to Myles Garrett was Daeshon Hall," A&M coach Kevin Sumlin said. "When protection slid, Daeshon was able to put himself on map in a nationally televised, Top 25 game. Got three or four sacks. People realized they may have to block both those guys."

Against Alabama, however, the Aggies will be confronting what some are calling the best Crimson Tide team under Saban. And that includes four national championship teams in the past seven years.

"With the NFL Draft, I was hoping half of them would leave," Sumlin said, "but they stayed. And they are playing at a high level."

Actually, the Tide had seven players picked in the 2016 draft, including center Ryan Kelly in the first round, but replacements keep rolling in.

Freshman quarterback Jalen Hurts leads the offense. Since taking over as the starter in the second game of the season, he is completing passes at a 63.5 percent clip while throwing for 198 yards a game with nine touchdowns against only three interceptions.

He has talented targets in wide receivers Calvin Ridley (39 catches, 477 yards) and ArDarius Stewart (26-379). If opposing defenses start to gang up on the passing game, the Tide simply turns to running backs Damien Harris and Josh Jacobs. They have rushed for 572 and 345 yards, respectively, totals that rank first and third on the team with Hurts at No. 2 with 428 yards.

Like his counterpart at A&M, Hurts leads his team in rushing touchdowns with eight.

"Opportunistic" might be the best way to describe the Tide's defense. The unit has scored eight touchdowns on interception and fumble recovery returns. The Tide also has three punt return TDs for a total of 11 non-offensive touchdowns, one more than they had all of last year.

"Like anything else, once you have success, it becomes contagious," Sumlin said. "Guys work at and take pride in it. Combination of all those things. Not just one thing. But it's certainly not luck."

The Alabama offense has looked unstoppable in the last few games. The Aggies defense has the ability to get turnovers but they have given up a lot of yards to teams a lot less formidable than the Crimson Tide. Jalen Hurts should be able to find Ridley and Stewart often and Alabama should win this one going away.