Michigan head coach John Beilein looks at the National Championship trophy. The No. 3 seed out of the West region, Michigan (32-7) is looking to become the first team to ever advance to the national championship game without playing a team seeded fifth or higher. Photo courtesy of Michigan Men's Basketball/Twitter

As Michigan and Loyola (Chicago) prepare for the national semifinal in San Antonio on Saturday, two things are obvious.

One, the winner of the game will be the underdog in the national championship game on Monday.

But second and most important, one of these teams will have an unexpected opportunity of a lifetime.

While the second game on Saturday between Villanova and Kansas is the more marquee matchup that many aren't surprised made the Final Four, Michigan and Loyola will battle to see if their unexpected feel-good stories will continue all the way to the national championship game.

The No. 3 seed out of the West region, Michigan (32-7) is looking to become the first team to ever advance to the national championship game without playing a team seeded fifth or higher.

But anyone who has watched the Wolverines the past two months knows their advancement to San Antonio is anything but a product of a favorable path.

Michigan entered the tournament as one of the hotter teams in the country following wins over top-10 opponents Michigan State and Purdue in the Big 10 Tournament, and the Wolverines haven't slowed down.

Michigan comes to San Antonio on a 13-game winning streak and has showcased the ability to win games without playing its best offensively.

The Wolverines have been subpar on offense in three of their four tournament wins, with the lone exception being a 99-point outburst in a 99-72 regional semifinal win over Texas A&M.

But thanks to a buzzer-beating 3-pointer from roughly 30-feet by Jordan Poole that beat Houston in the second round and stellar defense throughout, Michigan has advanced to its second Final Four in the past six years.

"I've never seen a team work so hard and be so connected on both ends," Michigan head coach John Beilein told the Detroit Free Press after a 58-54 win over Florida State in the West regional final. "Really proud of these guys."

Michigan would love nothing better than to give the 65-year-old Beilein his first national championship as he heads into the final years of his career.

The Wolverines advanced to the title game in 2013, but lost to Louisville in a result that has since been vacated due to NCAA sanctions.

Michigan might have been a surprise to make the Final Four once February came, but that has nothing on Loyola.

Very few had the Ramblers (32-5) penciled in for the Final Four, but that is what the mid-major out of the Missouri Valley Conference finds itself after a dream ride.

First came back-to-back buzzer-beating wins over Miami (Ohio) and Tennessee in the first two rounds of the South regional, then a one-point win over Nevada in a regional semifinal.

The No. 11 seed in the South, Loyola then routed Kansas State 78-62 in a regional final to continue its Cinderella story.

"This is not something where it just started," Moser told the Chicago Tribune. "These guys have been investing for a long time on how hard they worked, how hard they believed, and we've kind of had this mantra about the process."

A guard-heavy team that relies on ball movement and penetration, Loyola will have its toughest test of the season against a Michigan defense that has shut opposing guards down throughout its winning streak.

The Wolverines are the highest-rated defensive team of the squads in the Final Four.

Loyola has played solid defense in its own right in its tournament run, so the game will be a battle to see which team can execute best in half-court sets rather than a fast-paced contest. 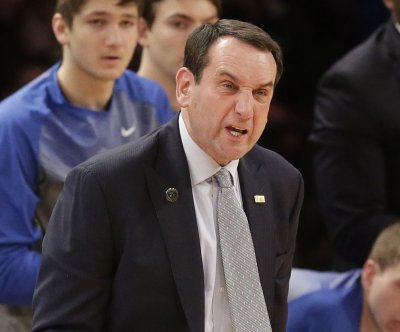