Alabama's head basketball coach Avery Johnson talks with Collin Sexton (R) during the second half against Auburn in the SEC Tournament game on March 9 at the Scottrade Center in St. Louis. Photo by BIll Greenblatt/UPI | License Photo

A year ago, Alabama All-America guard Collin Sexton was finishing up his high school career in Georgia and tearing up the spring and summer AAU circuits, emerging as an unknown into a Top-10 recruit.

This year, he has elevated Alabama into the NCAA Tournament as perhaps the most electrifying player since Kemba Walker propelled Connecticut to the NCAA title in 2011.

Next year, Sexton most likely will be playing in the NBA.

On Thursday, Sexton will lead the ninth-seeded Alabama Crimson Tide (19-5) against the eighth-seeded Virginia Tech Hokies (21-11) in a first-round East Region game in Pittsburgh. And as Walker proved, great guard play can carry a team a long way.

"For us, in year three, this is where we wanted to be, back in the tournament, and hopefully have a chance to play some of our best basketball," Crimson Tide head coach Avery Johnson told reporters. "When we play at a high level, we feel we can beat anybody."

In four years in Blacksburg, Va., Buzz Williams has turned around the ACC cellar-dweller into a dangerous team making its second straight tournament appearance as a No. 9 seed.

Wisconsin knocked out the Hokies last season in the first round, but Williams said experience is invaluable.

While Sexton gets top billing for the Crimson Tide, the Hokies are one of the most balanced teams in the nation. Five players average double figures -- four shoot better than 39 percent from beyond the arc.

Williams has a team that understands team defense after a late-season tactical change in his approach to coaching. Already with one of the most efficient offenses in the nation, Williams refocused on defense and packing the lane and protecting the rim.

"After the Miami game (the Hokies gave up 84 points), we watched film and he apologized to us all," Justin Robinson said. "[Williams] said it was bad coaching for him not making this change sooner."

The results should get Alabama's attention. In the first 23 games, opponents shot nearly 49 percent against the Hokies. With a new attitude toward defending, that number plummeted to 42 percent.

"We knew that we had to change," Ahmed Hill told the Richmond Times-Dispatch. "Our great coaches came up with an idea and we went with it. That's who we are now."

In the minutes after finding out they would be playing the Hokies, Johnson said he knew very little about Virginia Tech.

But now he and his staff have had more than 48 hours to study the opponent and what he discovered is a veteran Hokies team that beat Virginia, Duke and North Carolina.

When talking about the Crimson Tide, the point of emphasis is Sexton, who's used to stealing the show.

Last year, he surprised many by winning the slam dunk contest in the Powerade Jam Fest as part of the festivities at the McDonald's All-American Games.

"The fans came out to see a show and we gave it to them," Sexton told a national television audience on ESPN.

The nation knew the Crimson Tide had a special player when on Nov. 25, Alabama almost upset then-No.14 Minnesota. For the last 11 minutes of the game, Alabama played with only three players -- because of ejections, an injury and another player fouling out -- and almost beat the Gophers.

One of those three players was Sexton, who scored 17 points while playing three-on-five. He finished with 40 points.

Sexton (19.0 points per game) is adept at driving to the basket. He can finish around the rim or dish off to fellow freshman John Petty (10.1) or sophomore Dazon Ingram (9.9 points, 5.6 rebounds).

A big question mark is the health of Donta Hall, who compiled 10.9 and 6.8 rebounds per game, and is one of the top shot blockers in the nation at 2.1 per game. He suffered a concussion Friday against Auburn.

He didn't practice on Monday, remaining on the sideline riding an exercise bicycle.

"I'll know a lot more about his status once we get on that plane to go to Pittsburgh or especially when he wakes up [Wednesday] to see how he recovers from whatever he's able to do today," Johnson told AL.com Tuesday afternoon. 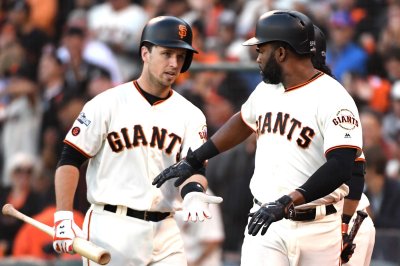