Mississippi State Bulldogs get rematch with No. 13 Tennessee Vols in SEC tourney 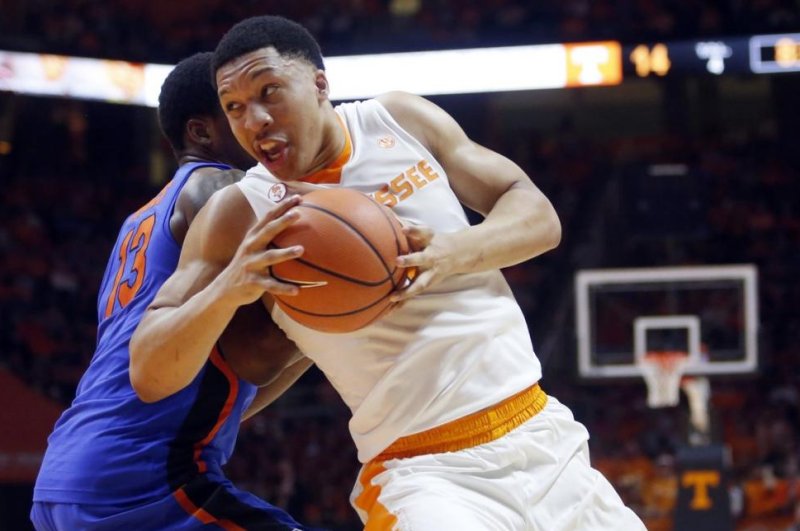 Tennessee sophomore forward Grant Williams makes a spin move on a defender. Williams, who is averaging 15.6 points, 5.8 rebounds and 1.8 assists per game, was named SEC Player of the Year this week. Photo courtesy of Tennessee Basketball/Twitter

Tennessee is not resting upon its regular-season SEC co-championship with Auburn.

The No. 13 Volunteers (23-7) want to distinguish themselves as the best from the conference as they open play in the SEC Tournament on Friday in a quarterfinal game against Mississippi State in St. Louis.

The Bulldogs (22-10), who lost at home to Tennessee 76-54 on Feb. 27, advanced to have the rematch with the Volunteers after defeating LSU 80-77 in a second-round game Thursday.

"We played the regular season, and now we are going into the conference tournament where there's a lot at stake," said Tennessee coach Rick Barnes, the SEC Coach of the Year. "There's another championship that can be won. ... There's more to be done.

RELATED No. 23 Kentucky Wildcats continue to improve as they host Ole Miss

"My mind is always getting on to the next thing. This is good but it can be better."

The Volunteers emerged as co-champions after getting picked 13th in the league's preseason media poll.

They also feature the SEC Player of the Year, sophomore forward Grant Williams, who is averaging 15.6 points, 5.8 rebounds and 1.8 assists per game. Williams was also named an All-SEC first-team selection.

RELATED No. 17 Kentucky looking for better result at Tennessee

Tennessee has established itself with its defense. In the Volunteers' last four games of the regular season, they held three teams to less than 40 percent shooting from the field. This occurred less than two weeks after allowing Alabama to shoot 57.1 percent in a 78-50 loss in Tuscaloosa, Ala.

"Our defense, that's what we can hang our hat on," Barnes said. "We've tried to do that all year. We just believe if we can stay with it, it will help us win."

Tennessee's weakness is rebounding. The Volunteers were outrebounded in six of their seven losses.

In the rout over Mississippi State 10 days ago, Schofield had 24 points and seven rebounds. The Volunteers outrebounded the Bulldogs 34-24.

Mississippi State's Quinndary Weatherspoon had 17 points and six rebounds in that game.

In the win over LSU on Thursday, Weatherspoon finished with 15 points, six assists and four rebounds. Fellow guard Lamar Peters had a game-high 24 points, shooting 8 of 11 from the field, including 5 of 7 from 3-point range.

"We have an opportunity to play the team that's playing the best in our league," Mississippi State coach Ben Howland said of Tennessee. "They're really tough. They are so physical. I voted for Williams for MVP of the league. He's a tremendous player.

"They have depth. They have size. They play great defense and they're hard to defend. What else can I say?"

Peters said Mississippi State's win over LSU confirms the Bulldogs should be an NCAA Tournament team.