Michigan State hitting on all cylinders 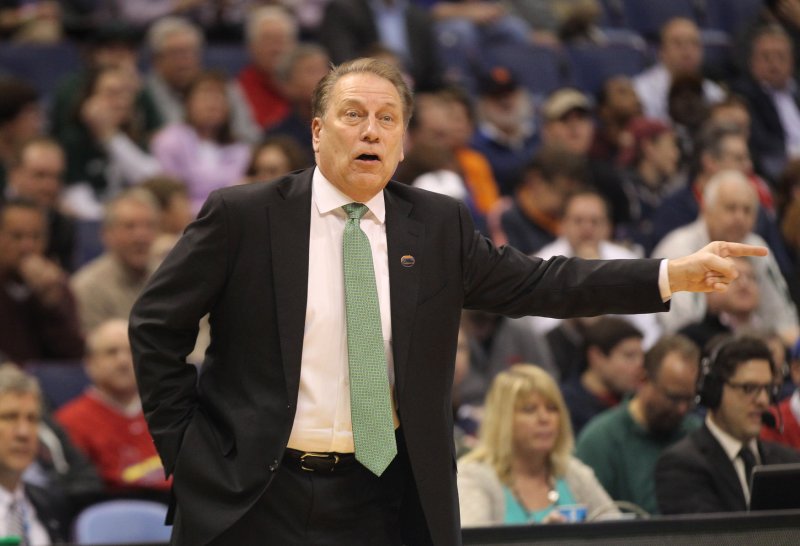 Tom Izzo has his Michigan State Spartans hitting on all cylinders once again. Photo by Bill Greenblatt/UPI | License Photo

Michigan State has scored more than 100 points in the three consecutive games. Holding the Spartans under the century mark would be a significant accomplishment for Savannah State on Sunday.

The second-ranked Spartans finish up their nonconference schedule with an afternoon game against the Tigers at the Breslin Center. They scored a season-high 111 points against Cleveland State on Friday after posting 107 points against Houston Baptist and 102 against Long Beach State in their previous two outings.

"It means a lot. It means that we are really growing," sophomore guard Joshua Langford said of the streak. "But that the same time we have a long ways to go and I think the biggest thing with us is making sure that we stay consistent and not settle."

Langford tied his career high against Cleveland State with 23 points. The team as a whole shot a season-high 65.1 percent. Michigan State (13-1) has won 12 straight, all by double digits.

"The basket was big (Friday)," he said. "Sometimes we have those nights but I think the biggest thing we did was focus on our defense. A lot of times when you focus on the defense it bleeds into the offense and you saw that (Friday)."

With the unusually swift Friday-Sunday turnaround, Spartans coach Tom Izzo is preparing for this game in the same manner he'd prepare his team for the second game on an NCAA Tournament weekend.

That's probably as close as the Tigers (3-11) will come to a postseason atmosphere. They have lost five straight while playing a rugged schedule. Michigan State will be the fourth consecutive ranked opponent they have faced.

"I'm glad that's our last game (against) the ACC," coach Horace Broadnax said after the team's most recent loss. "So we're going to move on to the Big Ten and play Michigan State."

The Tigers trailed by 21 points at halftime to the Cavaliers. It could be a similar experience in East Lansing against the red-shot Spartans.

"We have a small window to compete against these guys," Broadnax said. "If we don't step through that window early, it can get out of hand and they can control the game from there."

Virginia has the nation's second-best field-goal percentage defense at 35.9 percent. Unfortunately for Savannah State, it now has to compete against the team that is No. 1. The Spartans are holding teams to 33.3 percent shooting.