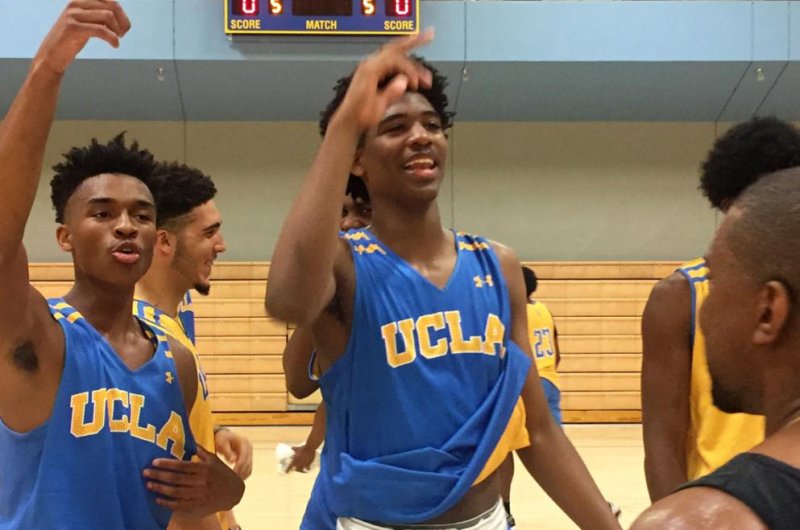 July 4 (UPI) -- Rappers 2 Chainz and Kanye West got in some hoops this week and took photos with the UCLA men's basketball team.

"A lot of our guys listen to his music, so it was a cool thing for them," a UCLA spokesperson told CBS Sports. "We sometimes get celebrities on our campus, and you never know how they're going to be. But, honestly, Kanye was super-friendly with our guys. I was impressed."

The duo balled before the Bruins' Monday summer practice session at the Wooden Center gym.

"Great now I have to deal with pops thinking he's way cooler than he really is," Bruins coach Steve Alford's son, Bryce, tweeted for a caption of a photo featuring his dad with West.

Among those Bruins taking photos with the celebrity performers? LiAngelo Ball. The middle Ball brother is an incoming freshman this season for the Bruins after his brother Lonzo was the No. 2 overall pick in the 2017 NBA Draft for the Los Angeles Lakers.

Monday morning in the gym, and Kanye West & 2 Chainz roll by your offseason workout. #GoBruins #OnlyInLA

"Thank you @uclambb for letting me and Ye ball out at the court today," 2 Chainz wrote on Instagram.

West's wife, Kim Kardashian, once rented out the Staples Center for her husband's birthday. 2 Chainz was much closer to actually suiting up on high-level hardwood.

The rapper, also known as Tauheed Epps, played college basketball for Alabama State. Epps posted averages of 2.4 points and 3.0 points per game in his two seasons with the Hornets.

West and 2 Chainz got together this weekend for a family barbeque, according to US Weekly.

Get Right for the Summer Workout …