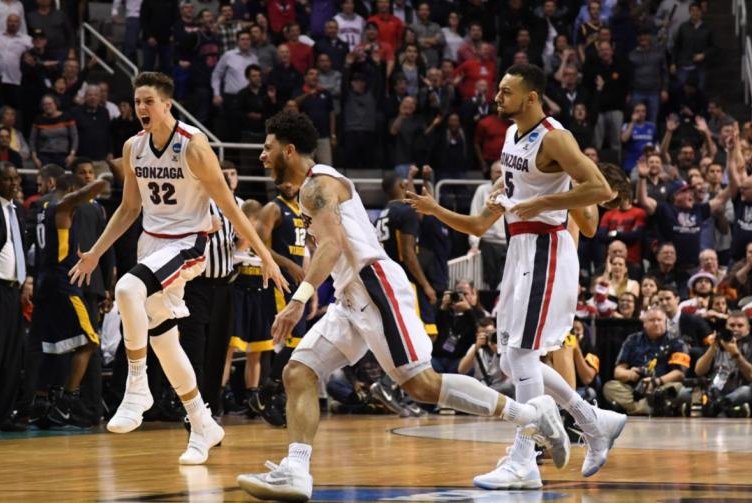 SAN JOSE, Calif. -- West Virginia did not make it easy. Its full-court, full-time pressure makes for a busy, difficult match.

But Gonzaga guard Jordan Mathews worked through it, and his go-ahead 3-pointer with 57.3 seconds remaining helped the top-seeded Bulldogs to a 61-58 victory over the Mountaineers in the NCAA Tournament West Region semifinals at the SAP Center on Thursday.

"We had never come across that throughout the season," Mathews said. "It wasn't frustration. It was more like, I don't know, confusion, trying to figure it out. But just staying the course and rallying around our guys and just thinking about the defensive end helped my offense in the end."

Mathews' third 3-pointer of the game gave the Bulldogs a 60-58 lead, and guard Silas Melson made 1 of 2 free throws with 37.9 seconds remaining before Gonzaga survived a frantic finish.

Mountaineers guard Jevon Carter had a game-high 21 points and four 3-pointers, but missed two forced 3-pointers in the final 20 seconds while being harassed by Nigel Williams-Goss. West Virginia got another offensive rebound but could not get off a final shot before time expired.

"That was a mistake on my behalf," Carter said about shooting 3-pointers. "I knew they had a lot of guys at the top. I should have drove it to the basket, but knowing it was a 3-point game, I tried to go for the three since I'd been hitting. But if I'm in that position again, I'll take it to the basket."

Seven-foot center Przemek Karnowski and 6-9 forward Johnathan Williams scored 13 points apiece for Gonzaga, which meets Arizona or Xavier in Saturday's Region final with its first trip to the Final Four at stake.

Williams-Goss had 10 points, seven rebounds and three steals for the Bulldogs, who limited No. 4 West Virginia (28-9) to 26.7 percent shooting, tying a season worst.

"We had a shoot-around walk-through today and made every shot," West Virginia coach Bob Huggins said. "Their size bothers everybody around the rim. When you're driving at the goal and you run into a 7-1, 300-and-whatever-he-is, it's hard to score. We didn't make shots that we normally make."

The game was full of stops and starts as West Virginia's can be. There were 51 fouls called, 26 on Gonzaga, and 61 free throws attempted.

Gonzaga shot 40.9 percent, made 21 of 32 free throw attempts and was outrebounded 41-34. West Virginia stayed in the game by making 21 of 29 free throws and forcing 16 turnovers.

"That was just an absolute war, rock fight, however you want to describe it," Gonzaga coach Mark Few said. "Those are two really, really tough teams, two really physical teams that laid it out there on the line.

"All year we've been banking on our defense. Our defense stepped up and got it done there at the end. We're 40 minutes away from a Final Four, which was something we set our sights on at the start of the year."

Mathews hit back-to-back 3-pointers in the first four minutes of the second half when West Virginia came out in a zone defense.

Karnowski made a short shot in the lane and a 16-footer from the key to give Gonzaga its biggest lead 45-37, forcing a West Virginia timeout with 13:49 left.

West Virginia responded with a 15-4 run to take a 52-49 lead keyed by eight points from Carter, inducing a 3-point field goal and a three-point play as Gonzaga missed six straight field goals.

NOTES: Gonzaga is 4-0 versus West Virginia -- all since 2012. Gonzaga eliminated West Virginia from the 2012 NCAA Tournament 77-54 in the second round in Pittsburgh. ... West Virginia coach Bob Huggins (819-330) is the third-winningest active coach in the NCAA behind Duke's Mike Krzyzwekski and Syracuse's Jim Boeheim. ... Gonzaga is one of three teams to appear in the Sweet 16 in each of the last three seasons, joining Wisconsin and North Carolina. It is making its 19th consecutive NCAA tournament appearance, the fourth-longest streak in Division I behind Kansas, Duke and Michigan State. ... Gonzaga C Przemek Karnowski is 134-14 at Gonzaga, the most victories by any player in NCAA history.